Showing posts from September, 2019
Show all

https://www.rawstory.com/2019/09/trump-issues-ugly-threat-to-arrest-adam-schiff-for-treason-as-impeachment-gains-momentum/?utm_source=&utm_medium=email&utm_campaign=1584 President Donald Trump escalated his attacks on Rep. Adam Schiff (D-CA) as impeachment gained momentum. Polls showed a sharp uptick in public support for impeachment as a series of bombshell revelations showed Trump pressured Ukraine to cook up damaging campaign information against Joe Biden. The president has  attacked a whistleblower  who revealed Trump’s call with the Ukrainian president, and he has complained that Schiff, the chairman of the House Intelligence Committee, had paraphrased that call during a hearing last week. “Rep. Adam Schiff illegally made up a FAKE & terrible statement, pretended it to be mine as the most important part of my call to the Ukrainian President, and read it aloud to Congress and the American people,” Trump tweeted. “It bore NO relationship to what I said
Post a Comment
Read more

https://www.alternet.org/2019/09/trumps-behavior-is-getting-more-and-more-erratic-and-republicans-might-have-no-choice-but-to-oust-him/?utm_source=&utm_medium=email&utm_campaign=1592 The conventional wisdom has always been that, while Democrats might be able to pull off impeachment, with Republicans standing firm in opposition, the counterargument was that that dynamic could change as 1) the extent of Donald Trump’s crimes emerged, and 2) Trump behaved in such ways that it would become increasingly difficult to defend him. The first of those always seemed a stretch. Republicans know all about Trump’s crimes and likely more. The Republican leader in the House once famously said that  Trump was on Moscow’s payroll , and it  didn’t bother him one bit . The second seemed more fertile ground, as Trump is unable to handle pressure in any remotely graceful way. Nothing about him literally screaming PRESIDENTIAL HARRASSMENT on Twitter makes one think, “He’s got this. And while
Post a Comment
Read more

https://dailyarchives.org/index.php/focus/2690-german-church-forced-to-replace-controversial-nazi-bell Two years ago, it was revealed that several German churches still had bells displaying swastika engravings. One of the them, hung in a church in Lower Saxony, has now been exchanged. ( DW ) A small town in northern Germany has received a new church bell, officials confirmed Sunday, after the previous bell brought back memories of the country's NS-era. St. Michael's Church in Fassberg, in the state of Lower Saxony, used to display a bell dating from 1938 that featured two swastika engravings and the eagle badge of Germany's World War II air force, the Luftwaffe. The original bell was installed when the church was built by Adolf Hitler's National Socialist government before the war. German media have reported that around two dozen other German churches still have bells with similar engravings, including a church in Herxheim, near Stuttgart, which has regul
Post a Comment
Read more

Malaysian PM: Israel is the Origin of Modern Terrorism 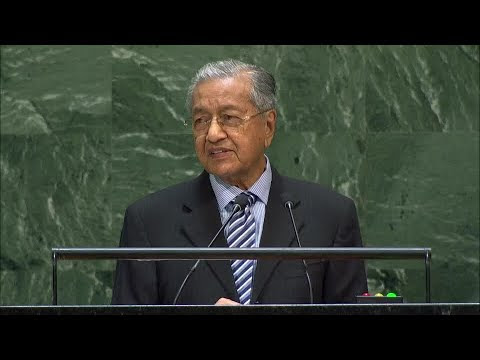 http://www.renegadetribune.com/malaysian-pm-israel-is-the-origin-of-modern-terrorism/ ( MEMO ) The creation of Israel by seizing Palestinian land and expelling its 90 per cent Arab population is the root cause of terrorism, the Prime Minister of Malaysia Dr Mahathir Mohamad said in his speech at the UN, reports  Malay Mail . The Malaysian PM stated that since the creation of Israel “…wars have been fought in many countries, many related to the creation of Israel. And now we have terrorism when there was none before, or at least none on the present scale.” Making his comments at the General Debate of the 74th UN General Assembly in New York, he added: “Military action against acts of terrorism will not succeed. We need to identify the cause and remove it. But the great powers refuse to deal with the root cause.” The prime minister added that Malaysia accepts the state of Israel “as a fait accompli”, adding: …Malaysia cannot accept the blatant seizure of Palestine land
Post a Comment
Read more

Sweden Bans History in Schools, Kids will Learn about Gender Issues, Immigration and Holocaust Instead

https://dailyarchives.org/index.php/news/2688-sweden-bans-history-in-schools-kids-will-learn-about-gender-issues-immigration-and-holocaust-instead No more Plato or Aristotle. No Rome, no more teaching of Swedish Great Power era in Swedish upper grade history classes. ( Voice of Europe ) This is the new move from the Swedish Board of Education, which wants Swedish pupils to focus on Hitler, World War 2 and the following postmodern era in the late 20th century instead. Recent days, the Swedish debate has focused on the social democratic next move to make the Swedish people less historically aware. Due to lack of lesson time, the Board of Education now suggests that the History subject must be radically changed. Gender issues, climate and migration are of course included elements in the new suggested revised course plans of social sciences, which includes history. At the upper grades 7-9, where pupils are 13-15 years old, there will no longer be any history taught dated old
Post a Comment
Read more

https://dailyarchives.org/index.php/archives/2687-the-history-of-american-national-socialism-part-iv-1942-1945-the-war-years The Japanese Attacked Pearl Harbor on December 7, 1941. The next day the German-American Bund burnt its membership lists and other sensitive documents, and dissolved itself. Three days later, Hitler declared war on the United States. ( National Vanguard ) by Martin Kerr With very few exceptions, which will be discussed below, the other American NS and pro-NS groups followed the Bund’s lead. But the Bund’s 25,000 members did not simply evaporate, nor did they cease believing in National Socialism. The America First Committee, associated with Charles Lindbergh, had 800,000 members. Most of these people, if not all, were broadly sympathetic to Hitler’s Germany. They, too, did not simply cease to exist when their movement formally shut down its operations on December 10. The first reaction of the rank-and-file adherents and sympathizers of National Soc
Post a Comment
Read more
More posts