GREENBELT, Maryland — Israeli binary options operative Lee Elbaz was found guilty by a Maryland jury on Tuesday on three counts of wire fraud and one count of conspiracy to commit wire fraud in connection with a vast scheme to defraud investors all over the world out of more than $145 million.
The jury reached its verdict less than a day after a juror was dismissed after reporting he had had indirect contact with third parties who had influenced his thinking about the case. The dismissed juror, who worked at a kosher bakery in Maryland, had appeared to be nodding off occasionally during the trial.
As the jury foreman stood up and read out the words “guilty,” “guilty,” “guilty,” “guilty” on all four counts, Elbaz’s mother ran sobbing out of the courtroom while Elbaz sat in stony silence.
Elbaz had been free on bail and living with a relative in San Francisco while awaiting trial. District Judge George Hazel ordered her taken into custody immediately after the jury’s verdict, according to her attorney.Each of the four counts carries a maximum penalty of 20 years in prison. Elbaz, 38, is scheduled to be sentenced on December 9.
Elbaz was the CEO of Yukom Communications Ltd., one of more than a hundred binary options companies that operated in Israel between the years 2008-2018.
Elbaz trained employees to lie to investors and rigged the odds against them making and recouping any money, Justice Department prosecutor Rush Atkinson said during the trial’s closing arguments last week.
“There is no way this fraud happened without Lee Elbaz,” Atkinson said. “Everybody told the exact same lies because that is what Ms. Elbaz trained them to do.”
Elbaz is one of 15 defendants who worked for Yukom, which operated the websites BigOption and BinaryBook, and was the first to be tried. Elbaz was arrested by the FBI on September 14, 2017, as she got off a plane at JFK airport in New York. She was indicted by a US federal grand jury in March 2018 for participating in a scheme to “defraud investors in the United States and across the world.”
Five former employees of Yukom Communications Ltd. and Numaris Communication Ltd. in Israel — Lissa Mel, Shira Uzan, Liora Welles, Austin Smith and Yair Hadar — signed plea deals with the US government. All but Mel testified at the trial on behalf of the prosecution, saying that Elbaz instructed them to lie to investors in order to get those investors to deposit as much money as possible, and to do everything possible to prevent them withdrawing their funds.
Nine other defendants were indicted in February. The separate indictment against the nine other defendants, including Yukom owner Yosef Herzog, says the scheme involving BinaryBook and BigOption cost investors more than $145 million worldwide, including thousands of victims in the US.
Herzog is presently in Israel and the US government is preparing to send an official request for his extradition. He denies all wrongdoing.
Yukom employees pretended to be from other countries, lied about their professional qualifications and adopted “stage names.” Elbaz used the alias “Lena Green” while interacting with investors, according to prosecutors. BinaryBook’s website homepage.
Yukom employees also falsely guaranteed profits, lied about their historical rates of return, and didn’t tell investors that they only made money if their customers lost money, prosecutors said.
An email instructed BinaryBook sales representatives to target retirees, Social Security recipients, pension holders and veterans as clients, according to court filings accompanying guilty pleas by former employees.
“No one here was interested in helping clients,” said prosecutor Atkinson. “It was all a plan to steal money.” 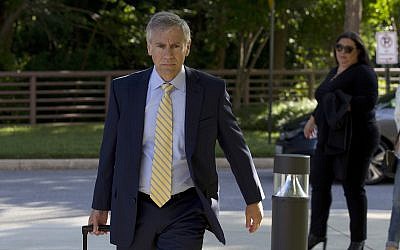 Lee Elbaz’s attorney Barry Pollack arrives at federal court for jury selection in her trial in Greenbelt, Maryland, July 16, 2019 (AP Photo/Jose Luis Magana)
Defense attorney Barry Pollack argued that Elbaz didn’t condone any of the fraudulent tactics used by employees who worked under her supervision at a call center in Caesarea, Israel. Elbaz urged her employees in writing to “work clean,” her attorney said. “The employees that were defrauding clients were also defrauding Ms. Elbaz,” Pollack said. “She was trying to prevent (fraud).”
After the verdict was announced, Pollack said, “Obviously the jury struggled to reach this verdict… We respectfully believe that they got it wrong.
Binary options fraud flourished in Israel for about a decade before the entire industry was outlawed via Knesset legislation in October 2017, largely as a result of investigative reporting by The Times of Israel that began with a March 2016 article entitled “The wolves of Tel Aviv.” At the industry’s height, hundreds of companies in Israel were engaged in the widely fraudulent industry, employing thousands of Israelis, allegedly fleecing billions out of victims worldwide.
Many of the fraudulent operatives have since moved their operations abroad, or switched to other scams, though Israeli law-enforcement authorities have proved unwilling or unable to prosecute more than a handful of alleged offenders. By contrast, the US government is ratcheting up efforts to bring Israeli offenders to justice.
The prosecution’s case was prepared by Department of Justice trial attorney Ankush Khardori. It was investigated by FBI special agents Jeremy Desor and Gregory Fine. Department of Justice attorneys Henry Van Dyck, Rush Atkinson and Caitlin Cottingham represented the US government at trial.
In a trial brief filed shortly before the Elbaz trial began, the US government set out how binary options fraud was generally perpetrated, describing how victims were approached, lured in, lied to, encouraged to make ever-greater deposits, and thwarted if and when they tried to withdraw their money.
Setting out in detail the means by which Elbaz allegedly fleeced her victims, the prosecution document constitutes a devastating insight into the cynical practices by which the fraudulent industry stole immense amounts of money from trusting victims around the world. The document provides confirmation by the US government much of the reporting by The Times of Israel over the past three-and-a-half years, regarding the methods by which binary options fraudsters duped their victims.
In response to the verdict, Israeli lawyer Nimrod Assif, who represents foreign victims of Israeli binary options fraud said, “the prosecutors should be commended for a very good job. This is not an easy case to try. The subject matter is complicated, the case is fact-intensive, and it’s hard to turn it into a coherent narrative.”
He added, “I hope that law enforcement authorities in Israel will study this case closely. To anyone familiar with the forex and binary options industry in Israel, it is clear that the fraudulent tactics presented in the Lee Elbaz case were not unique to Yukom but rather a standard practice among many Israeli companies in this field. Such an ongoing and vast illegality could have been made possible only by a systematic failure of law enforcement.”
145 million dollars binary convicted fraud israeli lee elbaz operative options united states