Top Democratic lawmakers in the US House of Representatives have reportedly discussed censuring the Israeli envoy to the United States and the American ambassador to Israel over the Jewish state’s decision to bar entry to congresswomen Rashida Tlaib and Ilhan Omar.
According to a report Friday in the McClatchy news service, around a dozen Democrats have begun talks on how to express a “deep lack of confidence and trust” in Ron Dermer, Israel’s ambassador to the US, and US envoy to Israel David Friedman.
Citing two unnamed sources familiar with the discussions, the report said the lawmakers were considering putting out a statement of no confidence in Dermer and pushing for an inspector general investigation into Friedman.
“We are reviewing all of our options,” McClatchy quoted a congressional source saying. “With Dermer, the issue is that there already was a severe lack of trust. But now there is a severe lack of confidence. It is completely unclear that he represents his government given he has made promises that he has not kept and wasn’t clear if he ever had any chance of keeping.”Among those reportedly involved in the talks were House Foreign Affairs Committee Chairman Eliot Engel and House Appropriate Committee Chairwoman Nita Lowey, two prominent Jewish lawmakers from New York.
Last month, Dermer said Omar and Tlaib would be allowed into Israel despite a 2017 law enabling the country to deny entry to those who back boycotts of the Jewish state. 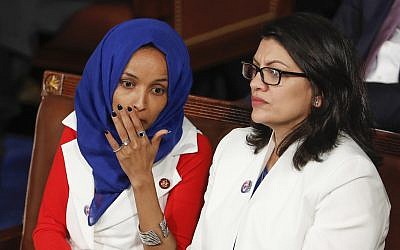 Rep. Ilhan Omar, D-Minn., left, joined at right by Rep. Rashida Tlaib, D-Mich., listens to President Donald Trump’s State of the Union speech, at the Capitol in Washington, Tuesday, Feb. 5, 2019. (AP Photo/J. Scott Applewhite)
Tlaib and Omar, first term lawmakers from Michigan and Minnesota, are supporters of the Boycott, Divestment and Sanctions (BDS) movement against Israel.
On Thursday, however, Israel announced the pair would not be allowed into the country for their planned visit next week, citing their support of BDS and the listing of the destination on their itinerary as Palestine.
Prime Minister Benjamin Netanyahu also said that Tlaib and Omar did not intend to meet with Israeli officials, an assertion denied by latter.
Despite the ban, Tlaib was granted permission to visit her grandmother in the West Bank on humanitarian grounds after she requested to make such a visit. She changed her mind about the family trip hours after it was approved on Friday, citing its “humiliating” terms.
House Majority Leader Steny Hoyer of Maryland, who recently led a delegation of Democratic lawmakers to Israel, issued a statement Thursday condemning Israel’s decision and said it was contrary to assurances he had received from Dermer.
“Dermer is saying privately that he expects this to go away within a day – it’s a real lack of understanding on the consequences of this,” a congressional source was reported saying by McClatchy. 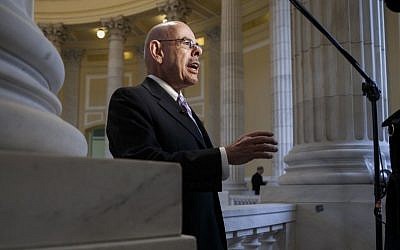 Then Democratic Rep. Henry Waxman of California defends then US President Barack Obama’s health care law during a TV news interview on Capitol Hill in Washington, February 5, 2014. (AP/J. Scott Applewhite)
The news service said the Democratic lawmakers discussed Saudi Arabia’s denying entry in 1975 to Henry Waxman, a Jewish Democratic congressman from California, before relenting after State Department pressure.
They reportedly argued that Friedman’s decision to not push for Israel to allow Omar and Tlaib into the country broke with that precedent.
Friedman issued a statement Thursday backing the Israeli ban.
In addition to leading Democrats such as House Speaker Nancy Pelosi (California) and Senate Minority Leader Chuck Schumer (New York), the ban has also been condemned by leading pro-Israel groups such as AIPAC and Republican Senator Marco Rubio of Florida.
Netanyahu’s announcement that Tlaib and Omar would be barred from entering the country came shortly after US President Donald Trump wrote on Twitter that Israel would be showing “great weakness” if it let them enter.
Trump denied pressuring Israel to implement the ban and Dermer said in a call with Jewish groups on Thursday that the move had nothing to do with the US president.
censure democrats entry ban house u.s. envoys weighing