Fewer Americans Trust the FBI – And That’s a Good Sign

The FBI now considers conspiracy theories a “new domestic terrorism threat,” according to a document obtained by Yahoo News.¹ It may be unsurprising that an agency which competes for public funding would want to present everything as a threat. What is perhaps even less surprising is that public trust in the bureau has been steadily eroding. With scandal surrounding everything from alleged sexism to civil asset forfeiture, the FBI might want to reconsider picking another fight.
The FBI has already had its share of scandals this year. In June, The Daily Beast reported on lawsuits against the FBI put forth by female trainees.² The lawsuits alleged everything from discriminatory hiring practices to sexual harassment. More than 15 women have made allegations against the FBI, with one allegedly being told she needed to “play the game” with male employees to progress in her career. The alleged victim also claimed that a Training Division unit chief told her there was nothing she could do. “You will be having a lot of mixed emotions right now, and there is no internal appeal process,” the unit chief is quoted as saying. Scandals like this one are likely to damage public trust, and there is already evidence for this.

To add to the FBI’s negative publicity, its public trust has waned among the average American. A 2018 poll by Axios³ showed a diminishing trust in the FBI. This was especially true among Republicans, 47% of whom reported an unfavorable view of the FBI and just 38% holding a decidedly favorable view.
The FBI’s failing trust among conservative voters has been tied closely to the recently concluded ‘Russia Probe.’ Regardless, skepticism of the probe had been demonstrated in both parties. One poll showed 63% of voters believed the FBI was withholding evidence from Congress.⁴ Likewise, a Harvard CAPs-Harris poll showed 54% of respondents believed special counsel Robert Mueller had conflicts of interest.
Another 2018 survey by Huffington Post also did not help the FBI’s public image. Just 18% of respondents claimed to have a “great deal” of trust in the bureau.⁵ In contrast, 37% reported having “not very much” or no trust, and about 13% were uncertain. Distrust was especially strong among self-identified independents, about 45% of whom had little or no faith in the FBI.
Despite claims made by some analysts, the same survey found that negativity directed at the FBI was not all partisan. When asked who they thought was more trustworthy: the FBI or Donald Trump, voters were much more likely to be undecided. This could suggest that many if not most Americans trust neither the FBI nor President Trump.

Everyone is a Terrorist

The FBI is going to have an especially hard time in its mission to target conspiracy theories, which are often just the majority opinion. A 2016 survey by researchers from Chapman University studied the public’s belief in supposed conspiracies.⁶ A solid majority of respondents (about 54%) said they believed the government was concealing evidence regarding 9/11. Nearly half felt they were lied to about the assassination of former president John F. Kennedy. About three fourths of those surveyed leaned toward believing at least one theory on the list. 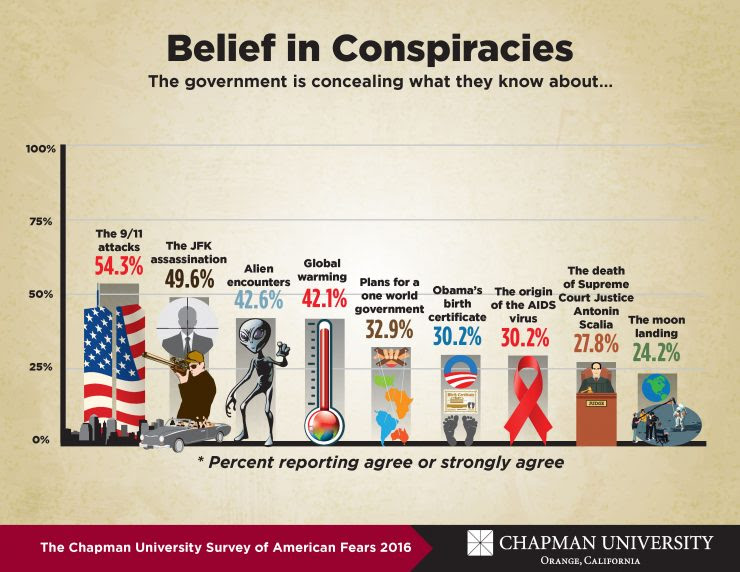 Besides this data, there is one issue on which Americans are even more united against the FBI. That issue is the issue of civil asset forfeiture, the seizing of property or assets from individuals suspected of (but not necessarily convicted of) a criminal offense. Surveys show that when Americans understand what this practice actually is, they overwhelmingly oppose it.⁷ Additionally, a poll by the Mississippi Center for Public Policy found that out of 625 registered voters, 88% opposed civil asset forfeiture.
In general, the tide of public opinion is working against the FBI on several key issues. Likewise, negative media publicity is unlikely to help the FBI in this regard. Moreover, even if law enforcement and federal agencies do not mind being admonished by the general public, they could easily come under the increasing threat of reduced funding and internal discord in the future.
If the FBI wants to operate as a reputable entity, they should stop picking taxpayer-funded fights they can’t win and instead resume serving the American people.