WASHINGTON — Liberal American Jewish leaders, fuming at another mass shooting allegedly carried out by a white supremacist, took US President Donald Trump to task on Sunday, saying he had fueled xenophobia and division in the country for three years, while failing to press for stricter gun laws.
Their condemnations came after a 21-year-old gunman, armed with a powerful rifle, walked into a crowded Walmart on Saturday in El Paso, Texas — a majority Hispanic city on the border with Mexico — and opened fire. Authorities identified the assailant as Patrick Crusius from Dallas, who stalked shoppers in the aisles of the retail giant as he riddled them with bullets, leaving at least 20 people dead and another 26 wounded.
Crusius is suspected of being the author of a manifesto posted online before the attack, in which he said was responding to “the Hispanic invasion of Texas.”
“The El Paso killer was a white supremacist who wrote a ‘send them back’ manifesto, echoing the words of President Trump,” Soifer said. “Trump is responsible for fueling a fire of xenophobia and hatred in our country, and Republicans are responsible for allowing it to occur.”Halie Soifer, executive director of the Jewish Democratic Council of America, said in a statement that the shooter was reciting language frequently used by Trump — a sign that his influence was evident in the motivation for the attack. 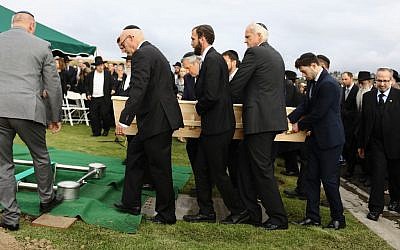 Pallbearers carry the casket of Poway synagogue shooting victim Lori Gilbert-Kaye during a graveside service on April 29, 2019, in San Diego, California. (Mario Tama/Getty Images/AFP)
Over the past year, two other mass shootings by white supremacists were preceded by similar manifestos — one written by John Earnest before the Poway synagogue shooting in April, and one authored by Brenton Tarrant before he opened fire on two mosques in New Zealand in March, killing 50 people.
Jonathan Greenblatt, the head of the Anti-Defamation League, noted that the release of a manifesto before Saturday’s attack fit the same pattern.
“We have documented a rise in extremist activity, both online and in our communities,” Greenblatt said in a statement. “As with too many of these incidents, our experts have again been reviewing the apparent manifesto of an alleged shooter, as well as other elements of his online footprint, to evaluate potential extremist ties.”
Greenblatt went on to say that, if police confirm the manifesto’s authenticity, it will make the El Paso attack one of the deadliest acts of domestic terrorism in modern American history.
“If the suspect is the author of the manifesto, this latest act of domestic terrorism will be, according to the ADL’s Center on Extremism’s records, the third deadliest act of violence by a domestic extremist in over 50 years, and the second deadliest act of violence by a right-wing extremist in the same span, second only to the 1995 Oklahoma City bombing,” he added. 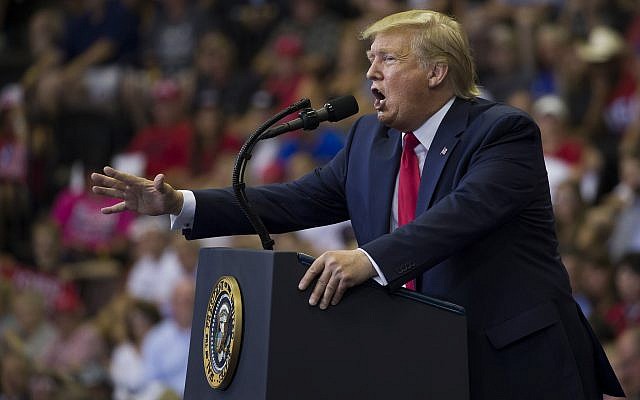 US President Donald Trump speaks at a campaign rally on August 1, 2019, in Cincinnati. (AP Photo/Alex Brandon)
Trump has been frequently criticized for his tacit welcoming of support from white nationalists. During the 2016 campaign, he refused to immediately reject the support of David Duke, the former grand wizard of the Ku Klux Klan.
As president, he likewise refused to immediately condemn neo-Nazis and Klan members who marched in Charlottesville in August 2017, saying that “very fine people” were marching alongside them.
Most recently, he told four freshmen congresswomen of color to “go back” to where they came from. All four are American citizens, and three of them were born in the United States.
He has also implemented immigration policies that have been broadly condemned as inhumane — including the family separation policy of splitting up parents from their children at the border — to deter immigrants and asylum seekers from entering the country.
After the El Paso attack, Rick Jacobs, who heads the Union for Reform Judaism, lamented the inaction of politicians to effectuate stronger gun-safety measures. 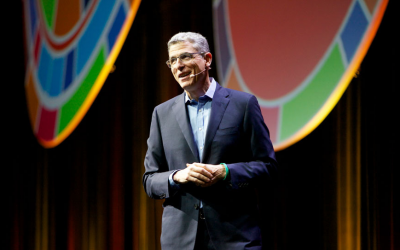 Rabbi Rick Jacobs, president of the Union for Reform Judaism, addressing delegates at its 2017 Biennial in Boston, December 7, 2017. (Courtesy of the Union for Reform Judaism/via JTA)
“It is not enough for elected officials to muster their ‘thoughts and prayers,'” he said in a statement Saturday. “Like millions of Americans I’m sick of the pathetic excuses offered by too many lawmakers for not passing strong and effective common sense gun laws.”
He then directed his indignation toward Trump. “And if we are to call on the leaders of our nation to address this epidemic of hate, a goal that, hopefully, almost all Americans cherish, we must ask: When will this president stop demonizing asylum seekers and immigrants, which serves to embolden those like today’s shooter?”
donald trump el paso fueling liberal u.s. jews massacre white nationalism