‘We no longer feel comfortable in our own shul’: North Miami Beach’s Jews cope after another synagogue shooting

(JTA) — When Rabbi Mark Rosenberg’s family played back the footage on their home’s security cameras in North Miami Beach, they could hear the rat-tat-tat of bullets being fired at the synagogue a few blocks away. On Sunday, a man had been shot repeatedly in front of the Young Israel of Greater Miami as he waited for daily services.
On Saturday, Rosenberg attended services, and sat on that very bench, outside the synagogue’s front door. A pro-bono police chaplain, he got a call the following evening from the police, and was up into the early morning dealing with the shooting’s aftermath.
The victim, Yosef Lipschutz, has had multiple surgeries and is in stable condition. The perpetrator is at large, and police have yet to determine if the shooting was an anti-Semitic hate crime.
But in the days since, the shooting has shaken the close-knit, Orthodox community of North Miami Beach, and left some wondering whether the sense of safety they previously felt has disappeared. While Rosenberg said the shooting isn’t comparable to the fatal attacks on synagogues in Pittsburgh and Poway, California this year, he can’t help but see a pattern.
“Because it was a shul, and because of all the anti-Semitism going on in the world today, we almost got used to it that we no longer feel comfortable in our own shul,” said Rosenberg, who is not Young Israel’s pulpit rabbi. “People are having these thoughts: Look how easy it is for it to happen. Look how simple it is for someone to come with a gun and start shooting up people.”

The attack occurred at 6:35 p.m. on Sunday night, before the evening prayer service. Lipschutz, 69, a bachelor who attends services at Young Israel every morning and evening, got to synagogue early and was waiting on the bench outside the front door, as he usually does.
Congregants said that Lipschutz is a gentle, unassuming person who is always helping out around the synagogue. Usually, that means unnoticed tasks like monitoring the air conditioning, holding open doors or helping people with disabilities to their seats. Last weekend, he cosponsored the synagogue’s refreshments after Saturday services.
“He has the softest smile when you look at him and say hi,” said Amy Salzman, who runs youth programming at the synagogue. “We need someone to volunteer to help put felt bottoms on the chairs, and then I see him there the next week, quietly by himself, putting felt bottoms on the chairs.”
On Sunday, Lipschutz was getting ready to enter the synagogue when a man who appeared to be in his 20s got out of his car, advanced toward the bench and began shooting at Lipschutz, according to Rosenberg. Lipschutz reportedly dove behind the bench — possibly saving his life — until the shooting stopped 20 or 30 seconds later. The perpetrator then got back in his car. 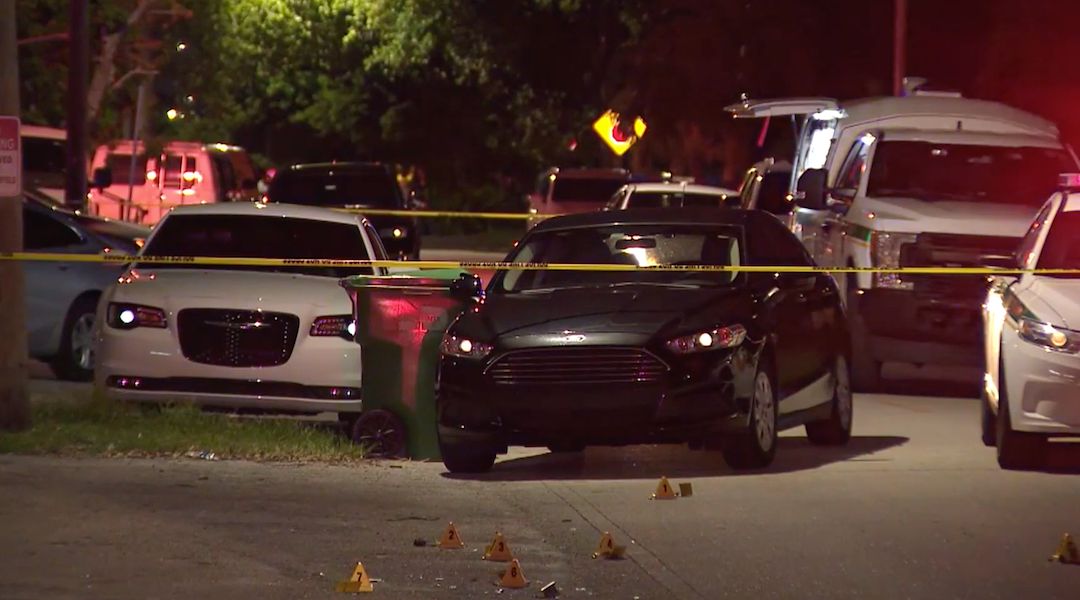 According to Rosenberg, the perpetrator circled the synagogue with his car more than once on Sunday.
Police have tried to find all possible security camera footage of the shooter. On Monday, a team of 10 to 15 detectives went house to house asking if people had tapes of the attack. And even though it has not officially been classified as a hate crime, Rosenberg said police are treating it like one: Police have stepped up patrols around all of the neighborhood’s synagogues, and have stationed a police officer outside the Young Israel whenever it is having services. Police have deployed a specially trained team to deal with the shooting’s aftermath.
Young Israel, an Orthodox synagogue with roughly 300 member families, already has security measures in place, including cameras, a double-locked door and an occasional armed security guard. But Salzman lamented that it apparently isn’t enough.
“We can’t be quiet anymore, because that’s not how you get protection, that’s not how you get people to listen,” she said. “People are scared: ‘Can I come to shul? Is it safe to come with my child?'”
She added, “Right now, there’s so much police around, it’s the safest place to be, probably.”

The wider North Miami Beach community, meanwhile, is uniting around the Young Israel, said the synagogue’s rabbi, David Lehrfield. On Monday, local law enforcement briefed all of the community’s rabbis and a group of lay leaders.
Although a Brooklyn rabbi was shot and killed in August 2014 just blocks away from the Young Israel synagogue, community members said it’s unclear whether that murder was a hate crime. Locals said they do not generally experience anti-Semitism.
“We do have a feeling of security and a feeling of confidence that everything will be OK and that this is a random occurrence that will never happen again,” Lehrfield said. “We are very united and very optimistic. We intend to maintain the strength and sanctity of our community.”
Nor do community members expect the attack to scare people away from the neighborhood. Ron Fisher, a Young Israel member who runs the synagogue hospitality team, said the area is still attractive for Orthodox families because of its synagogues, kosher restaurants and other institutions.
“There are too many draws for people to come here for one isolated event to deter people from coming here,” he said. “I would expect that it’s not going to influence people.”
another beach cope no longer feel comfortable north miami jews own shul shooting synagogue