I am so disgusted by this sick clown world, where killer clowns are treated as royalty, or more accurately, as kingmakers. Rabbi Shmuley Boteach is one such killer clown who is tied into power politics on both sides of the aisle, while also cultivating relationships with countless kosher celebrities. Here is just a small sampling of Boteach’s buddies.
Rabbi Boteach is also the uncle of Efraim Diveroli, the international arms dealer who was only 21 when he landed a deal to supply the Pentagon with ammunition, which was violated as Efraim’s company AEY Inc repackaged 42 year old unserviceable ammunition from China. This was detailed in the movie War Dogs, which was produced by the jewish US Secretary of the Treasury Steve Mnuchin. The whole Boteach clan is involved in selling weapons around the world so as to destabilize regions according to the plans for a jew world order.
Boteach is part of the Chabad mafia, which has been exposed as a major power player in international politics (aka organized crime). Chabad is well-known for approaching jews and having them put on tefillin, as the Torah states that jewish men should strap on the black cubes every weekday. Chabad seeks to bring non-practicing (or just less extreme) jews “closer to their faith.”
Apparently Chabad gangsters like rabbi Boteach are also seeking to educate and influence “up and comers” from the “goyim” about the jewish faith as well. This is apparently what he did with New Jersey Senator Cory Booker, who is currently running for president. From Tablet:

New Jersey Senator Cory Booker is fond of telling the story of his introduction to Judaism. An African-American Baptist, Booker attended Oxford University in the early 1990s as a Rhodes Scholar. There, he had a chance encounter with a young Chabad rabbi named Shmuley Boteach that sparked a lifelong interest in the Jewish faith. Booker would eventually become co-president of Boteach’s L’Chaim Society—its first non-Jewish leader—and would maintain a decades-long friendship with the rabbi and an immersion in Jewish study. As journalist Jeffrey Goldberg once quipped, “I’ve met most of the Senate’s other Jews, and I can say, with a high degree of certainty, that Booker knows more Torah than they do.” 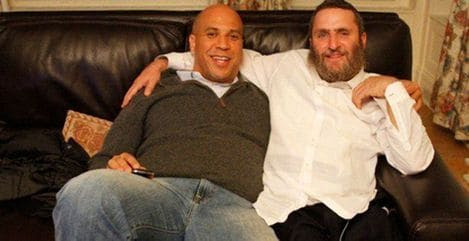 Now it is hard to accept Cory Booker as an “African American” as he is often described, since his skin color is only slightly darker than Boteach’s, and it could be well within the realm of possibility that he is actually a crypto jew. Why else would he be invited to Oxford’s Chabad House for a Purim party?

Now, there’s additional video evidence for Booker’s well-documented affection for Judaism. At sundown, the Jewish holiday of Purim commences, a day during which Jews celebrate their deliverance from a genocidal plot with feasting, dancing, and revelry. And while at Oxford, Booker celebrated right along with them. Footage from his time there captures him partying on Purim at the campus Chabad House, carrying Boteach—dressed as clown—on his back.

So if we accept the official narrative about Cory Booker being an “African American Baptist,” then is it not incredibly racist for the only “schwarze” (black goy) to be acting as a beast of burden for a jewish clown?
This also goes to show that Cory Booker’s rise within the political world was not organic, and definitely not an accident. He was selected by the Chabad grooming gang to enact their plans for worldwide domination, and ultimately the destruction of White Europeans.
Apparently Cory Booker and rabbi Boteach no longer speak to each other, because of Booker’s position on the Iran deal. I personally think it’s all a show, so Booker can appeal to his base. Even if he no longer carries around rabbi Boteach on his back, he is certainly being ridden by other kosher clowns.

- May 31, 2020
http://www.renegadetribune.com/jew-boy-caught-paying-off-and-directing-blm-rioters/
Is this one of the “White supremacists” inciting the violence who we’ve been hearing so much about? Or is it yet another Bolshevik jew?
Bitchute link
Read more