WASHINGTON —  When US President Donald Trump told four freshmen liberal congresswomen — all women of color — to “go back” to where they came from and leave the United States, he predictably sparked a firestorm and accusations that he was stoking racial tensions.
And after US Speaker of the House Nancy Pelosi defended the progressive “squad” as they’re often referred to — featuring Democratic lawmakers Alexandria Ocasio-Cortez of New York, Rashida Tlaib of Michigan, Ilhan Omar of Minnesota and Ayanna Pressley of Massachusetts — the president doubled down on his attacks, which the Anti-Defamation League and others recognized as racist.
In so doing, he injected an issue that appeared to have no relevance.
While the congresswomen have been much more critical of Israel than traditional Democrats, liberal US Jews said Trump’s insertion of Israel into the melee was a bald attempt to use the issue as a wedge to bolster opposition to the foursome.“So sad to see the Democrats sticking up for people who speak so badly of our Country and who, in addition, hate Israel with a true and unbridled passion,” Trump tweeted.
“He’s weaponizing support for Israel,” said Aaron Keyak, a veteran Democratic operative who runs Bluelight Strategies, a DC-based consulting firm. “Bringing in Israel on an issue that’s totally not related to Israel. That’s how you can tell he’s weaponizing it.” 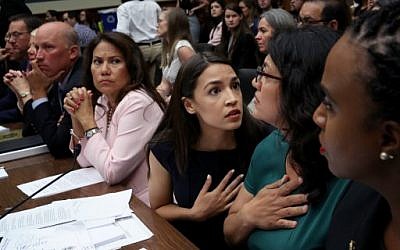 Rep. Alexandria Ocasio-Cortez (D-NY) (C) confers with U.S. Rep. Rashida Tlaib, (D-MI) (2nd R) and Rep. Ayanna S. Pressley (D-MA) (R) during a House Oversight and Reform Committee hearing July 12, 2019 in Washington, DC. (Win McNamee/Getty Images/AFP)
“And you can’t get away from the underlining racism of these tweets,” Keyak told The Times of Israel.
He called Trump’s statements “a continuation of the birther attacks” against former president Barack Obama. All four of the congresswomen are American citizens and only Omar was born abroad.
Amanda Berman, who heads the Zioness Movement, a progressive Zionist organization, said Trump’s comments could help fuel anti-Semitism that’s already on the rise in the United States.
“He doesn’t understand the fundamental challenges of the Jewish community in fighting anti-Semitism,” she told The Times of Israel. “People like to say that Jews are privileged white people and who can’t engage in intersectional battles or social justice spaces. He contributes so substantially to that dialogue, which is inherently anti-Semitic. And he is fueling it by connecting Israel to his own white supremacist tweets that attack congresspeople of color.”
Likewise, Hawaii Senator Brian Schatz, a Democrat, tweeted that Trump’s comments were “not helping Israel.”
“I have been pretty polite about this and so have other American Jews,” he wrote. “But you really have to leave us out of your racist talking points. You are not helping us, you are not helping society, you are not helping Israel. Your racism is your thing and we are not your shield.”

1,607 people are talking about this
Other Jewish groups, such as J Street, excoriated Trump’s tweets as xenophobic and bigoted, and said they were part of an attempt to stifle debate about American policy toward the Israeli-Palestinian conflict.
“We refuse to allow the real threat of anti-Semitism to be weaponized and exploited by those who themselves share a large part of the responsibility for the rise of white nationalist and anti-Semitic violence in this country,” the liberal Mideast advocacy organization said in a statement. “We refuse to allow false ‘anti-Israel’ charges to silence important debate over US foreign policy conflict and legitimate criticism of Israeli government policies.”
The Anti-Defamation League, which has been sharply critical of the congresswomen’s posture toward Israel, condemned the president on the grounds that his remarks were racist and risked damaging bipartisan support for the Jewish state.
“As Jews, we are all too familiar with this kind of divisive prejudice,” said Jonathan Greenblatt, the group’s CEO. “While ADL has publicly disagreed with these congresswomen on some issues, the president is echoing the racist talking points of white nationalists and cynically using the Jewish people and the state of Israel as a shield to double down on his remarks.”
“Politicizing the widespread, bipartisan support for Israel and throwing around accusations of anti-Semitism is damaging to the security of Israel and the Jewish community,” he added. “He should lead by example, stop politicizing these issues and stop smearing members of Congress.”


On the other side, the Republican Jewish Coalition backed attacks on the congresswomen, tweeting that South Carolina Senator Lindsey Graham was right when he said that they were “a bunch of a communists.”
- July 16, 2019
Email ThisBlogThis!Share to TwitterShare to FacebookShare to Pinterest
Labels: defend, israel, liberal, racist tweets, u.s. jews, weaponizing