At the end of June Facebook changed its rules in order to ban individuals and groups who bring weapons places for the purpose of intimidation, as well as people that encourage others to show up somewhere with weapons.
From Newsbusters:

Facebook released a report from its audit June 30, with several new policies about violent content. In the report, Facebook stated that it had “updated its violence and incitement policies to prohibit posts from people who intend to bring weapons anywhere to intimidate or harass others, or who encourage people to do the same.” In its old policy, Facebook wrote, “While we understand that people commonly express disdain or disagreement by threatening or calling for violence in non-serious ways, we remove language that incites or facilitates serious violence. We remove content, disable accounts, and work with law enforcement when we believe there is a genuine risk of physical harm or direct threats to public safety.”

Facebook also updated its rules to ban “statements of intent to commit violence; or Statements advocating violence.”
The new policy was obviously being selectively enforced, since pages belonging to the terrorist group Antifa still thrived on the social media giant.

At least 119 regional Antifa groups and pages remain untouched on Facebook after the company announced several new and updated policies, including one against violence. These groups have a collected 351,948 followers. Antifa groups around the United States have been linked to violence and doxxing, or a release of personal information. Some have threatened people whom they deem to be “racists” or “nazis.”

The Newsbusters article goes on to mention the following: 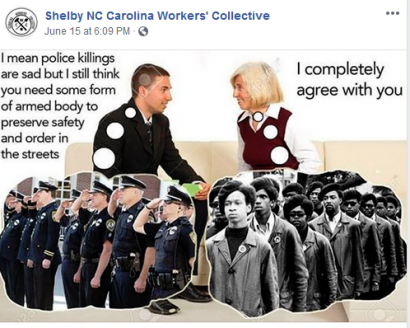 Any association of three or more people that is organized under a name, sign, or symbol and that has an ideology, statements, or physical actions that attack individuals based on characteristics, including race, religious affiliation, nationality, ethnicity, gender, sex, sexual orientation, serious disease or disability.

Something I found interesting is that Facebook’s definition of a terrorist group makes it clear that governmental organizations cannot be classified as terrorists, since otherwise Israel, the United States, Saudi Arabia, and all their buddies would clearly fall into this category. A terrorist group is:

Any non-governmental organization that engages in premeditated acts of violence against persons or property to intimidate a civilian population, government, or international organization in order to achieve a political, religious, or ideological aim

So it is perfectly kosher when a governmental organization engages in premeditated acts of violence in order to intimidate or achieve a political goal? However, these governments could still fall under the category of criminal organization, which includes any association of three or more people engaged in: “Homicide, Drug trafficking, Arms trafficking, Identity theft, Money laundering, Extortion or trafficking, Assault, Kidnapping, Sexual exploitation.” I could list specific examples from recent history that highlight just how criminal the US government in particular is, but I just encourage you to read more Tribune articles if you need to bring yourself up to speed.
Anyway, the point is that Facebook thinks it is fine if its users call for violence against people like us, who are peacefully engaged in trying to educate the world about the criminal cabal that is actually terrorizing the world.
After there was something of an uproar concerning the updated policies, Facebook quickly removed the clauses where it says you can issue death threats against people Facebook has decided to censor. The Facebook spokesperson told the Washington Examiner:

We don’t allow credible threats of violence against anyone. We do allow some speech that calls for certain forms of violence, such as calls for the death penalty for criminals or support for military action against terrorists. We have updated our Community Standards to be more clear about this.”

As of right now, it does not appear that Facebook has purged Antifa from its network, so it is obviously still selectively enforcing its rules against incitement to violence. As we know, inciting violence against so-called anti-semites, White nationalists, and “Nazis” is politically correct in our current world.
Regardless of what Facebook or the mainstream media considers acceptable, inciting violence and inciting riots are still illegal under US law. Good luck waiting for prosecutions to take place, though, considering we live under the tyranny of a Zionist Occupied Government (ZOG).
dangerous facebook high severity violence incite individuals organizations rules updates users