Renegade Editor’s Note: It was not until much later that “science” in the West finally came to the obvious conclusion that smoking causes cancer. This article uses the “N” word (Nazi), but the content is fascinating.
Adolf Hitler fights Lung Cancer. World’s first research linking smoking and lung cancer – conceived and paid for by Adolf Hitler
The Führer’s mother died from cancer. With profits from his best-selling book “Mein Kampf”, he donated 100 000 Marks to cancer research he personally commissioned at the University of Jena. Is there a link between cigarette smoking and cancer? Adolf Hitler thought so, and the research he commissioned conclusively proved it. There is a very strong link and smokers are very likely to get cancer – as shown by his research results at bottom right.
The research was conducted in 1941 at the “Scientific Institute for Research into the Hazards of Tobacco”, established at the Friedrich-Schiller University in Jena. This was the first such institute in the world.
With scientific proof to support his initiatives, Hitler made laws forbidding smoking in public places. He started a campaign to tell people how dangerous smoking is and tobacco use fell in Germany. This was the first official anti-smoking campaign in the world.
– Smoking was banned in the offices of the Air Force, postal services.
– Smoking was banned by uniformed police.
– Restaurants and cafes were prohibited from selling cigarettes to women.
– Tobacco coupons were denied to pregnant women.
– It was illegal for anyone under 18 to smoke in public.
– Advertisements for tobacco products were strictly regulated.
Adolf Hitler said: “Before going into retirement, I shall order that all the cigarette packets on sale in Europe should have on the label, in letters of fire, the slogan: ‘Danger, tobacco smoke kills; danger: Cancer.'”
During the war tobacco rations were distributed to German soldiers. Adolf Hitler ordered that it be given in a manner that would dissuade soldiers from smoking. Smokers were given six cigarettes per man per day, but non-smokers got chocolate or extra food. Women in the Wehrmacht were not allowed to smoke at all.
The phrase “passive smoking” was coined by Fritz Lickint, author of Tabak und Organismus (“Tobacco and the Organism”). He collaborated in this book with the Nazi Anti-Tobacco League.
Because of strong Nazi support for Science and medical research, most scientists, physicians and biologists became Nazi party members.
Germans were encouraged to take exercise, eat plenty of vegetables, drink mineral water instead of alcohol and stop smoking. To reduce breast cancer, women were taught self-examination. Nowhere else in the world had such a government sponsored health campaign existed up to that time.
When the Allies invaded Germany at the end of World War II, on seeing the terrible hunger and deprivations amongst the destitute public, they promptly imported 93,000 tons of tobacco to get Germans smoking again.
The Nazi scientist, Muller, published the above result of his research.
He is regarded as the father of tobacco epidemiology.
To understand the above chart, see that a very heavy smoker is 16.6 times more likely to get lung cancer than a non-smoker. 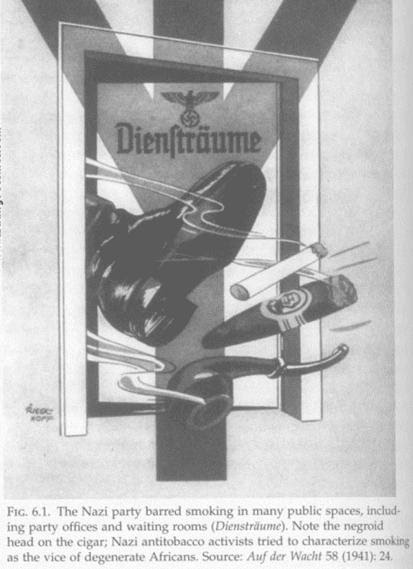