NEW YORK (JTA) — A lesbian advocacy organization in Washington, D.C., drew wide criticism last week for banning Pride flags with Jewish stars from its signature march.
Organizers of the DC Dyke March said the rainbow flags featuring a Star of David in the middle too closely resemble the Israeli flag and thus were not allowed, along with other flags representing “nations that have specific oppressive tendencies.”
It was the second Dyke March organization to issue such a ban. In 2017, three women carrying Jewish Pride flags were asked to leave a Dyke March in Chicago and told the event was “anti-Zionist” and “pro-Palestinian.”
Despite the two high-profile incidents, however, organizers of five Dyke Marches — in New York, Boston, Seattle, Portland and Buffalo — told the Jewish Telegraphic Agency that they do not have bans on Jewish Pride flags.

“Seeing what happened in D.C., that folks are not feeling welcome, it’s just not how we want our march to feel,” said Nate Shalev, a Jewish organizer of the New York City march, which is scheduled for June 29.
New York organizers are “not interested in creating a binary of Palestinian or Zionist,” added Alex Tereshonkova, another Jewish organizer of the New York march.
Despite the ban in D.C., marchers there carrying Jewish Pride flags were able to join the rally in the end, though a video from the march showed that a marshal initially demanded they remove the flag.
Dyke Marches in San Francisco and Iowa, as well as two in Canada, Halifax and Ottawa, did not respond to multiple requests for comment by JTA, though some of them did not appear to be hosting events this year. The Chicago Dyke March also did not respond to questions about its policy this year. 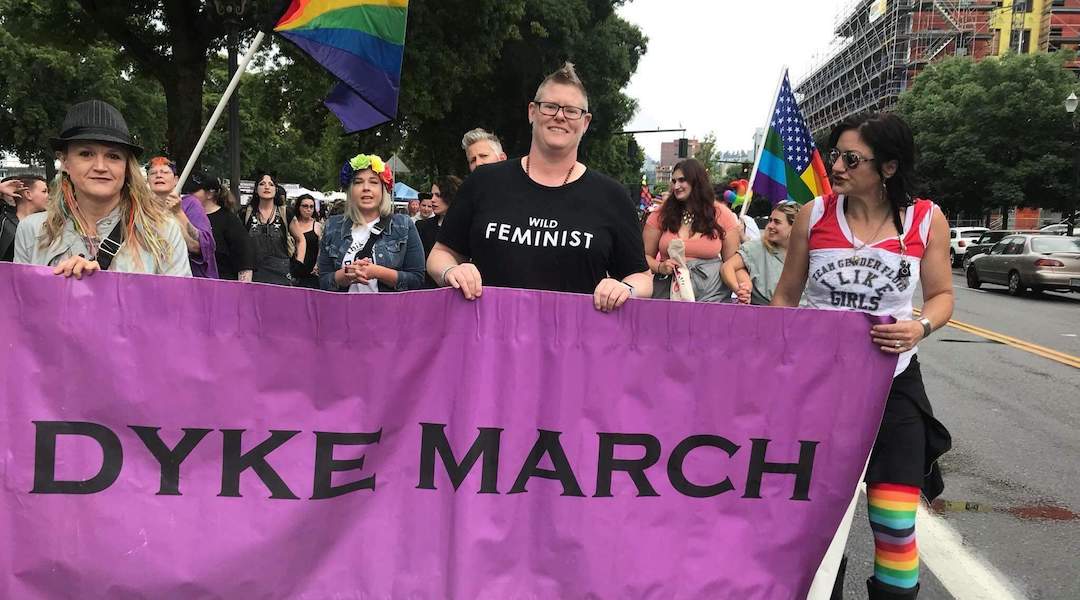 The controversy surrounding the Chicago and DC Dyke Marches, which are held and organized separately from the Gay Pride Parades and positioned as more politically radical, speaks to a larger conversation about anti-Semitism in progressive spaces. As anti-Zionism and support for the boycott Israel movement have grown on the far left, liberal Zionists say they feel less and less welcome in such spaces, and often feel singled out as Jews.
The most prominent example is the Women’s March, which initially received wide support from Jews on the left but whose national organizers were later accused of anti-Semitism. The accusations stemmed from organizer Tamika Mallory’s failure to disavow her relationship with Louis Farrakhan, the Nation of Islam leader who has repeatedly made anti-Semitic and homophobic comments.
Another organizer, Palestinian-American activist Linda Sarsour, also drew fire for describing ways in which she felt Zionism and feminism are not compatible. The Jewish online magazine Tablet reported that early Jewish organizers of the Women’s March were made to feel unwelcome and pushed out.

There is no central or national organization representing the Dyke March, and rallies around the country are planned independently and on different dates. Though the march, which first took place in Washington, D.C., in 1993, originates in the lesbian community, many rallies welcome all who identify with the word “dyke,” including bisexual, queer and transgender women, as well as gender nonconforming people.
The Portland Dyke March is “completely against the banning of the Israeli flag,” head organizer Belinda Carroll told JTA. The Oregon event is planned for Saturday.
“I get the sense of it to a degree in that they’re trying to make people more comfortable and less triggered within their own issues, so I understand that,” said Carroll, who is not Jewish. (Organizers of the DC Dyke March said they had banned the offending flags because “we need the march to be a space that is as welcoming to Palestinian Dykes as it is to Jewish Dykes.”)

“However,” Carroll added, “I think that it really erases Israeli people and Jewish people, and I think everyone deserves to speak and be known.”
There is no ban on flags at the Buffalo Dyke + March (the plus sign is intentional to welcome people with a range of identities), although the leadership has yet to discuss or make any policies on the issue, said organizer Karin Lowenthal, who is Jewish. The Buffalo march took place earlier this month.
But Lowenthal worries that her group could face outside pressure to ban Jewish Pride flags.
“I fear that we could end up with this kind of unnuanced, not thoughtful conflict here because of people’s lack of education and tendency to simplify these issues,” she said. “I am really concerned that we could end up with the same sort of hostilities.”
Carroll said she and other Portland Dyke March organizers had initially thought the 2017 incident in Chicago was “a one-off.”
“Now it ends up that it’s kind of a trend,” she said. “We want it to not be a trend, and we want everybody to be able to fly the flag that’s closest to their faith and their nationality.”
DC controversy despite dyke marches jewish pride flags welcome