The UK’s Prime Minister Theresa May (White Freemason, Zionist) is a Slave Of the Jews

Theresa May is a disgusting collaborator with internationalist Jewish Supremacist efforts. It is in this light that her support for the EU, her rogue unaccountable premiership and blocking of our national (racial) best interests through leaving the EU should be understood. Theresa May is a disgusting slave of International Jewry, a childless cucked slave whose only discernible ideology is obedience to Jewish Supremacism. This is the core of why she supports their European Union. Theresa May has been fanatically supported by the Jewish International media, ultimately it was that support that forced out all the other contenders for the Conservative Party leadership and paved her career into the Westminster establishment. Theresa May personally is a disgusting cuck to Jewish Internationalism worthy of absolute condemnation and requiring of equally international exposure. This article is in service of this truth with this short, quote filled and impactful expose.
Theresa May met with the Chief Rabbi of London on her 1st day in office, which was arranged from before she became the only candidate of the corruption-imbued Conservative party leadership election (in which all of the other candidates dropped out, leaving the Conservative party members with no pro-Leave candidate to vote for), This happened after the resignation of the prior Prime Minister, after he (David Cameron) and the Jewish establishment lost the EU referendum to our Leave vote victory. They needed a vicious manipulator like May who had the energy, malice and cucked slavery to Jewry to lie repeatedly to our English nation, something David Cameron did not have the energy nor credibility to do so effectively.
Theresa May supported the Remain campaign to keep the UK imprisoned within the European Union. She was on the side of the Jewish International establishment. The President of Israel gave a speech to the EU the week before the UK’s referendum on membership of the European Union where he praised the EU and showed clearly that the Israeli Jewish Supremacist establishment supports the destruction of Europe through the EU, which was created by and promoted by thousands of Jewish Subversives.
The Israeli Prime Minister said the EU faced a “complex test”: they were all polling Remain to win and for our nation to be permanently enslaved to the EU: Their own lies fooled them and we won, England and Wales voted in huge numbers to leave the EU. This defeat of the EU’s image of being ‘approved of’ (by anyone not in the Jewish Supremacist infested political establishment) was the greatest moment in our entire democratic history! Panic ensued and Jews were crying that morning; the photos of the Remain campaign office all in tears, various Jewish leftists posting tearful comments on social media it was as if they had imagined another imaginary Shoah or holocaust was now inevitable from their expressions!
It was glorious to watch, having campaigned for this victory myself, with thousands of leaflets, hundreds of miles of walking and hundreds of conversations. The establishment would like to push the narrative of hate fueling the Leave vote, but the opposite is true; it is our love for our nation. Their Semitic (and other non-white’s) hatred for our Germanic nation was the only hatred; Remain was fueled with a vicious, spiteful internationalist Jewish Supremacist hatred for us. And we beat them, Love for our nation won out. Semitic hatred and plans were overcome by ordinary folk voting and campaigning, and despite the demographic displacement we still won (75% of non-whites voted to Remain, according to LSE research).
So they have used Theresa May to block against our vote, to proclaim to be seeking an exit from the European Union whilst actually seeking to block us from leaving in a protracted (economic and political confidence damaging) manner that gives them enough time (they think) to change the narratives and shift a few % of votes. However, they are dead wrong; their panic-fuelled open treason has become transparent. It has now become about more than just a single vote. The Jewish Westminster regime’s democracy has been proven as meaningless, as it was always a facade, an excuse to rule illegitimately whilst suppressing our actual democratic views and interests. They made a huge mistake letting us decide our own future. They can’t take it back and the sabre tooth cat is out of the proverbial bag (of suppression and political control) and heading for their political throats as a now increasingly de-legitimized regime. 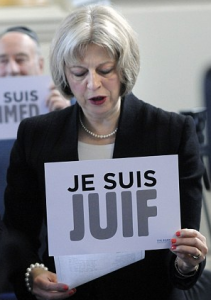 Theresa May, despite not being Jewish, is fully in servitude to Jewish Supremacist interests, concerns, agendas and maliciousness in her blocking of our vote to Leave the EU. Theresa May is the product of a cucked Christian family, whose mother’s name was Zaidee. Although Theresa May is not directly Jewish, her slightly hooked nose, which European noses are not naturally like, indicates she likely has some unrecorded % of Jewish genetics somewhere. Theresa May is undeniably a slave to Jewish interests. Theresa May, as Andrea Leadsom pointed out, has no children and thus has no interests in seeing our English nation propser or even continue. Thus Theresa May, on a political ideology and genetic interest basis, has no loyalty to our nation. Theresa May engages in routine and disgusting cucking to Jewish Supremacists.
Theresa May views her main mission in government as being a protector (or ‘Golem’) to the Jews and the Jewish internationalist agendas and degenerative agendas. Theresa May thinks Jewish Supremacists are the “national fabric” that all nations rely upon, but this is the inverse of the truth, as they undermine our nations. They have literally admitted this over and over again by their own words…

“We cherish the enormous contribution you make… Without its Jews, Britain would not be Britain.” -Theresa May

Yeah it would not have a single non-white here, it would be nice, safe, culturally and spiritually pure, prosperous and 100% North Western European racially.
At least she gets that right – multi-cultural, multi-racial ‘Britain’, would not exist if it were not for Jews. She is praised for saying this, but if we pointed out the truth in this statement in direct corroboration of the Barbara Spectre quotes we’d be called anti-semites.
It’s hilariously transparent, their sickening Semitic double standards. Theresa May is perversely trying to normalize this as something that indoctrinated, weakminded people are to view as good or ‘normal’. This is what Jewish Supremacists want: for everyone to bend the knee to them, so they can never be ‘exposed’, as everyone would already ‘know’ but yet do nothing about it in accordance with their hubris-filled, unobtainable ,yet fanatically sought after notion of chosenness versus other races that have seen through and overcome them time and time again.

Jews in Britain and Israel are over the moon with Theresa May becoming the British prime minister. The Israeli Ynet describes May as “Israel’s true friend.” The JC reports that May has worked closely with the Community Security Trust, a Jewish organisation that cares for the security of one ethnic group that believes itself to be chosen. …maybe she should attempt to stand up to the Lobby and serve the interests of her people. After all, she is going to be the British prime minister rather than merely queen of the Jews.” – Gilad Atzmon, 11th July 2016
Tomorrow this endeavour will be put to a complex test in the United Kingdom, while, day in day out, it stands the test of refugees and migration on a historic scale.” -Israeli President Rivlin at the EP Plenary on 22 June 2016 (1 day before the UK referendum on leaving the EU).[SOURCE] 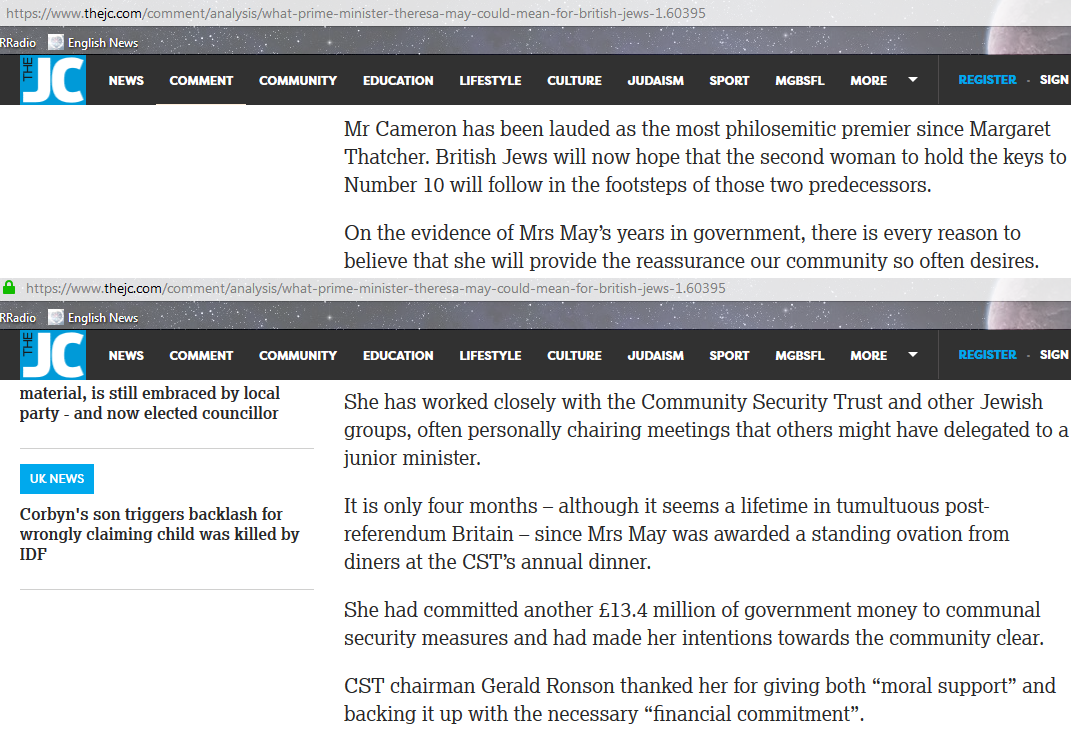 The below video contains sickening Philo-Semitism by Theresa May