I have known about Norman Lowell for a while now, having read Imperium Europa about 6 years ago. I like a lot of what the man has to say and consider some of eccentricities more endearing than off-putting, but I have not been paying much attention to what has been going on with him and Imperium Europa, his political party in Malta. I was pleasantly surprised to see that Imperium Europa is polling at 3rd place in Malta, having risen greatly from relative obscurity, even while Lowell is blasted for “holocaust denial” by the lying press.
From Lovin Malta:

Norman Lowell, the firebrand right-winger, Imperium Europa leader and MEP candidate who famously referred to himself as a “racialist, not a racist”, has explained his views on the Holocaust after comparing the World War Two concentration camp Auschwitz to the ‘Disneyland of Poland’.

Lovin Malta asked him to clarify his position on whether or not he denied that the Holocaust happened, and he said, “How can one deny something that never happened?”

The Holocaust never happened. Only some 70,000 Jews died in Auschwitz according to the Russian figures and backed by the Red Cross who had free access to the camps. These casualties died of typhus, dysentery and starvation since the allies had bombed all the rail-tracks leading to the camps – so the Germans just couldn’t feed them.”

What Lowell is saying is the truth of the matter, but Lovin Malta felt the need to “correct” Lowell with the mainstream lie:

The Holocaust refers to the systematic genocide committed by Nazi Germany under Adolf Hitler that murdered around six million European Jews between 1941 and 1945.
The Auschwitz concentration camp, which was built in conquered Poland, is considered an especially egregious example of the horrors of Nazi Germany, with over a million people exterminated within its prison walls through forced labour, starvation, infectious diseases, murder, or being forced into a gas chamber.

Once upon a time, the plaque outside Auschwitz stated that 4 million people were murdered there. This particular concentration camp was responsible for 2/3 of the ludicrous six million figure, but three decades ago the plaque was changed and 2.5 million less people were purported to have died there. 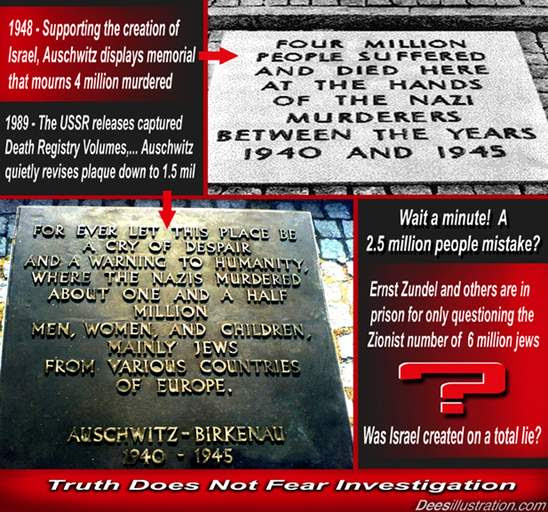 Instead of downgrading the 6 million to a still ridiculous 3.5 million, the jews and their minions insist that if you claim anything less than six million, you are a hate criminal who needs to be incarcerated for years and years, for your non-violent wrongthink position.
Lowell pointed out how the math regarding population statistics also does not add up:

Moreover, the Jewish population within the whole of Europe, including the unoccupied territories, stood at four million Jews, according to the Jewish Almanac in 1947. The Jewish population actually increased by 1947! How can a population that suffered six million dead increase in just two years? This whole hoax is the biggest lie since the Virgin Mary.”

One would have thought Lowell could not stoop any lower, but now he mocks Auschwitz Concentration Camp, calling it Poland’s Disneyland, and the holocaust a bunch of lies. Auschwitz remains a living pain to decent people. More than six million dead deserve better. Lest we become complacent thinking it cannot happen again. Lowell minced my words precisely because I wanted to send a clear message that our children need to be educated about where far right politics can lead mankind.”

What is most upsetting to the Holohoax-promoters of Malta is that many people there do not seem to care one bit about Lowell’s “denial” and support him regardless of (or perhaps even because of) his historical revisionism. Their small island has been flooded with Africans and Lowell’s Imperium Europa is the only political party actually trying to stand up for the Maltese people.

As of this week, Norman Lowell’s Imperium Europa is sitting as the third most popular political party, ahead of Partit Demokrtiku and Alternattiva Demokratika, in this month’s MEP elections.