WASHINGTON (JTA) — Two of the most powerful Republicans in the land, Senate Majority Leader Mitch McConnell and House Minority Leader Kevin McCarthy, are on the anti-Semitism case.
In a Washington Post op-ed published Tuesday, the two leaders describe a “rising tide of anti-Semitism in the world” and note the recent deadly synagogue shooting attacks in Pittsburgh and Poway, California, saying “that the frequency of anti-Semitic incidents in the United States is near a four-decade high.”
Their prescription is passage of a bill that would make it easier for states to ban business with entities that back the movement to boycott, divest and sanction Israel, or BDS.
It might seem a jarring segue considering that the greatest physical threat that American Jews have faced recently has been from white supremacists. But Republicans are seeing the focus on anti-Israel activity as good politics. The anti-BDS measures as not only popular with the pro-Israel community but a handy way to beat up on Democrats who are wary of the measures on free speech grounds.

Democrats are seizing on what they say is cognitive dissonance, a Republican eagerness to confront anti-Semitism, as long as one does not name its most dangerous purveyors, white nationalists.
Rep. Jamie Raskin, D-Md., the Jewish chairman of the Civil Rights and Civil Liberties subcommittee of the House Oversight Committee, convened a hearing Wednesday on the topic addressed to the Trump administration. The focus: Why is Trump rolling back Department of Homeland Security programs targeting white supremacists even as attacks are on the rise?
“The Trump administration is not correctly naming the problem and is not correctly addressing it either,” Raskin said. “This dilution and disorientation of the concept of terrorism has important resource and budget considerations.” 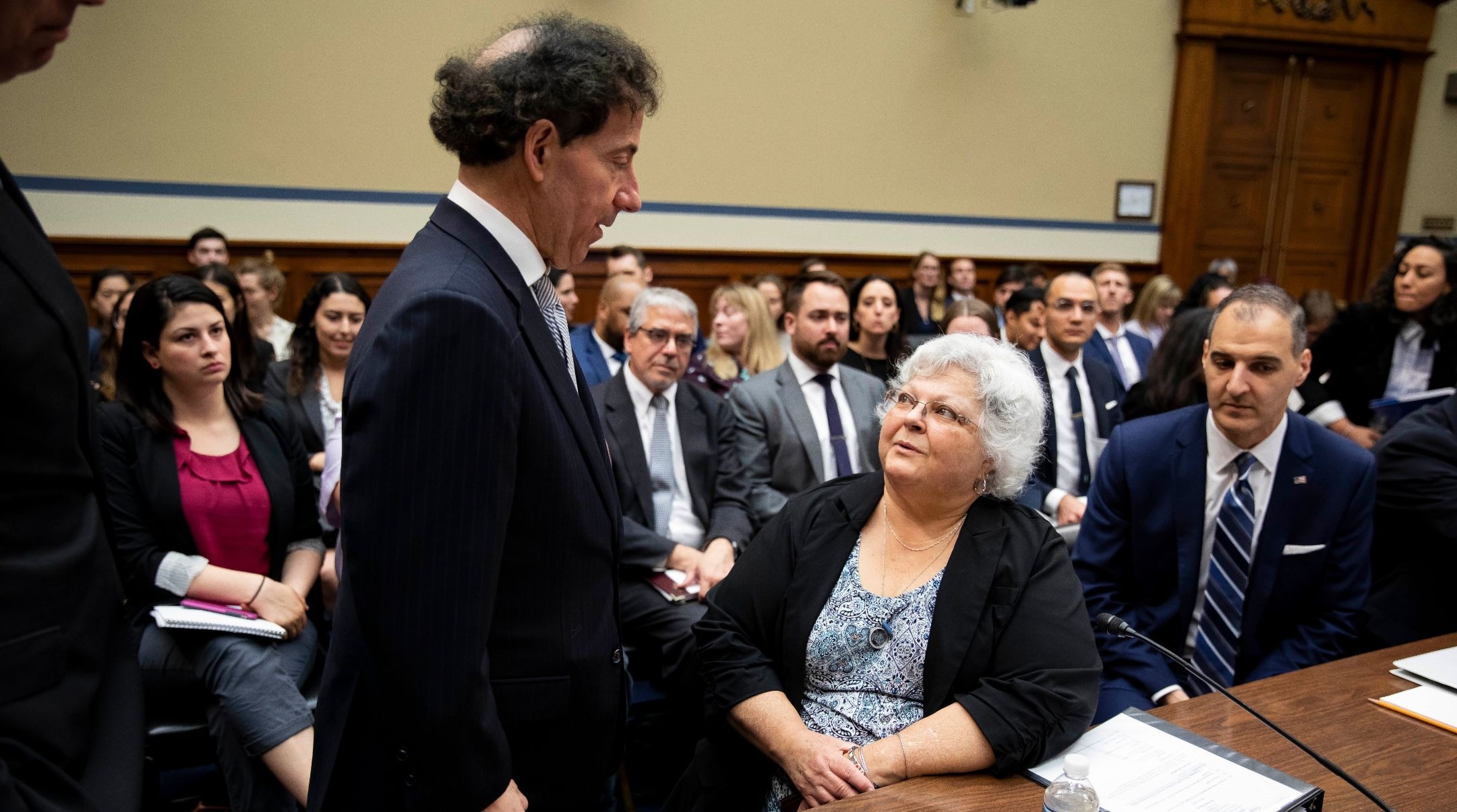 Susan Bro, mother of Charlottesville victim Heather Heyer, greets Rep. Jamie Raskin before the start of a hearing on confronting white supremacy at the U.S. Capitol in Washington, May 15, 2019. (Anna Moneymaker/Getty Images)

Linked to the Republican leaders’ line about the four-decade high in anti-Semitic incidents is an Anti-Defamation League report that blames most of the violence on white supremacists. Yet “white supremacist,” white nationalist” or even “extreme right” do not appear in the op-ed by the Kentucky senator and California representative.
That’s in line with parts of a pro-Israel community that wants to keep the focus on the anti-Israel activity that it says is indistinguishable from anti-Semitism. Israel sees BDS as a threat, and so does much of the organized American Jewish community.

Republicans are aggressively trying to attach the taint of anti-Semitism to Democrats, and have been assisted to a degree by a handful of Democrats on the party’s left who have been caught saying things that are at least insensitive to the realities of Jewish history and at worst invoke anti-Semitic slanders. The latest manifestation of Republicans instrumentalizing Israel criticism by Democrats into allegations of anti-Semitism was the distortion of an awkwardly expressed sentiment about the Holocaust by Rep. Rashida Tlaib, D-Mich.
In their op-ed, McConnell and McCarthy announced a bid to force the U.S. House of Representatives, where Democrats are in the majority, to vote on anti-BDS measures that many (not all) Democrats revile. Hardly any Democrats back BDS, but many fear that such anti-BDS bills inhibit free speech. Republicans insist these are spurious fears.
“Both of us are committed champions of the First Amendment and recognize that any state and local action would need to carefully balance individuals’ freedom of speech and expression with the public’s right not to be co-opted into bankrolling an anti-Semitic boycott,” the Republican leaders wrote.

(A proliferation of court decisions and the subsequent rewriting of some of the laws suggest that at least in their initial applications, the anti-BDS laws passed in about half the states are problematic.)
The bid to force a vote is just the latest GOP effort to embarrass Democrats on the BDS issue (and it appears to be working — House Majority Leader Steny Hoyer, D-Md., told The Hill that he hopes to advance anti-BDS legislation soon.) President Donald Trump, who joined in the Tlaib bashing, routinely calls Democrats “anti-Jewish” because of the real disagreements within the party on how to treat Israel.
Exploiting such rifts is fair game in politics, and the GOP targeting Democrats on BDS makes political sense. But some are asking why Republicans, chief among them Trump, are so reluctant to name white supremacists as a problem.
After a white supremacist killed 50 Muslims in Christchurch, New Zealand, in March, Trump said he did not think white supremacism was a big problem.
“I think it’s a small group of people who have very serious problems,” he said.
The Trump administration also baffled the civil rights community recently by refusing to sign on to the “Christchurch Call” to curb online extremism, following the deadly attack on mosques in New Zealand.
“It is incredibly discouraging that the U.S. government seems unwilling to even take part in these discussions and explore possibilities to counter this scourge,” ADL National Director Jonathan Greenblatt said.
At Raskin’s hearing, explanations about the Trump administration’s retreats from dealing with white nationalists were not immediately forthcoming; FBI and Homeland Security officials asked for a delay to compile their responses. Raskin will convene a hearing to hear them on June 4.

Wednesday’s witnesses included Susan Bro, the mother of Heather Heyer, who was run down and killed by a white supremacist during a neo-Nazi rally in Charlottesville, Virginia, in 2017; Michael German, a former FBI agent who infiltrated white supremacist groups; and George Selim, the senior vice president of programs at the ADL.
“Instead of scaling up to meet the threat, the government seems to be scaling down,” Selim said.
The only mildly dissident witness was Robby Soave, the associate editor of the libertarian magazine Reason, who argued that the seeming increase in attacks might be the result of better reporting.
Raskin’s hearing showed Democratic determination to keep the anti-Semitism ball in the GOP court. Reps. Jan Schakowsky, D-Ill., who is Jewish, and Ilhan Omar, D-Minn., a Muslim (and the target of Republicans for her own forays into anti-Semitic tropes and backing for BDS) joined in an op-ed in calling on the Trump administration to confront white supremacism.
And at a Jewish American Heritage Month event near the Capitol this week, Sen. Sherrod Brown, D-Ohio, said addressing anti-Semitism “means calling out the president of the United States when he engages in his racist behavior — even more when [Republicans] don’t stand up whether in Charlottesville, or in a church bombing, or a shooting in a temple.”

A clue as to why Republicans might resist naming the threat came in the opening remarks of Rep. Chip Roy of Texas, the ranking Republican on Raskin’s subcommittee. He said the problem of white nationalism was formidable, but also underscored Republican resentment at persistent Democratic and liberal attempts to identify the entire party with the malady. A person wearing a MAGA hat, he said, “should not be labeled a racist for doing so.”
A version of this post first appeared in The Tell, Ron Kampeas’ weekly newsletter on Jewish news from Washington. Subscribe to it here.
acknowledge antisemitism democrats far right GOP refuses