A group of white nationalists stormed a bookstore in Washington, D.C., to protest an event for a Jewish author's book on racial politics and how it’s impacting lower- and middle-class white Americans.
The group stormed the Politics and Prose bookstore on Saturday afternoon, interrupting a scheduled talk by the Jew Jonathan Metzl, a professor of sociology and psychiatry at Vanderbilt University who released his book “Dying of Whiteness: How the Politics of Racial Resentment Is Killing America’s Heartland” this spring.
Videos filmed by those in attendance showed the white men standing in a line before the audience chanting, “This land is our land.”
Catherine Wigginton, who tweeted a video of the brief chaos, said she was “impressed” with how Metzl handled the interruption. 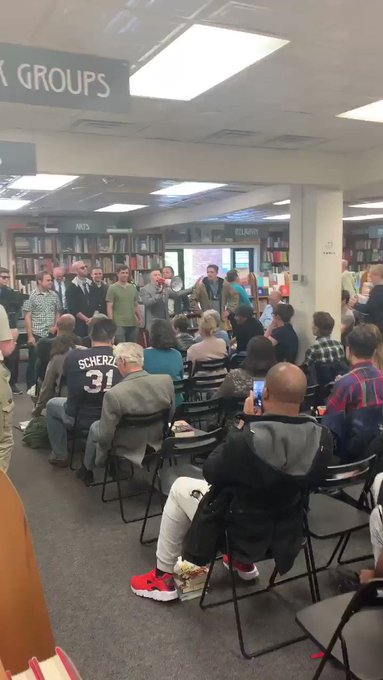 6 841 ember beszél erről
Twitter Ads-információk és Adatvédelem
“Does anyone want to process that before I get back to what I was saying,” she tweeted, recalling his reaction after the white nationalists left.
Metzl, who is also the director for Vanderbilt’s Center for Medicine, Health and Society, was speaking at the bookstore for an Independent Bookstore Day event.
Metzl told NBC Washington that before the protest broke out he was speaking to a man who had helped Metzl’s father and grandfather flee Austria before WW2.
“Not five minutes before, I had acknowledged him and said this is how great America can be when it is bold and generous,” Metzl recalled to NBC.
He told the Post that the incident was “very symbolic for me.”
The American Identity Movement did a good piece of activism recently.


The incident was reported in the mainstream media including in this NBC News report.
bookstore reading storm this land is our land washington white nationalists