The World Jewish Congress expressed its “disgust and outrage” following reports that an effigy made to look like a stereotypical Jew was hanged and burned in a Polish town as part of an Easter ritual.
(Times of Israel)
Robert Singer, CEO of the New York-based group, said in a statement that “Jews are deeply disturbed by this ghastly revival of medieval anti-Semitism that led to unimaginable violence and suffering.”
Residents, among them children, beat and burned the effigy in the southeastern town of Pruchnik on Good Friday. The figure represented Judas, the discipline of Christ who betrayed him according to the New Testament.
The effigy was given a brimmed hat and sidelocks, making it resemble an ultra-Orthodox Jew, along with a long nose, a trope used by Germany and by anti-Semites worldwide to introduce Jews. The words “Judas” and “traitor” were written on the doll’s chest. 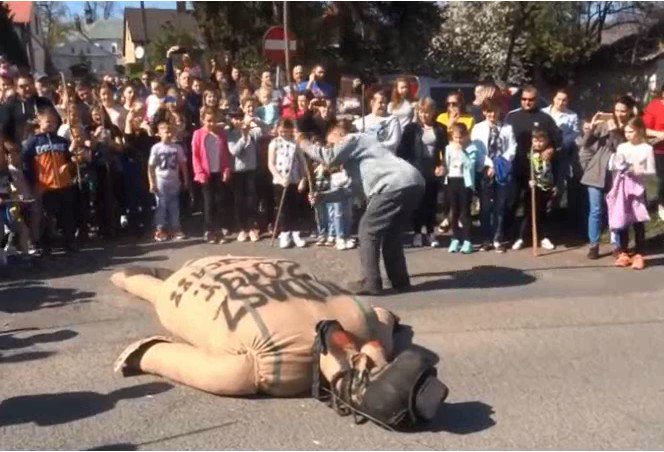 789 ember beszél erről
Twitter Ads-információk és Adatvédelem
On Friday morning, Pruchnik residents symbolically sentenced Judas to death, hanged the doll from a tall tree, and then dragged it through the streets with the public — including many children — beating it up with sticks. The ceremony concluded with the burning of the effigy.
Some liberal poles also expressed their disgust at the revival of the anti-Semitic ritual. Some posted photos online of the same ritual being carried out before World War II.
Poland, which was home to Europe’s largest Jewish community before the occupation by Germany (1939-1945), has seen a rise in anti-Semitic incidents in recent years.