Brexit Was About Our Racial and National Future

It is important to articulate this fact, as subversive political figures from Boris Johnson to Theresa May have claimed that our vote was to make a ‘Global Britain’ in terms of welcoming migrants from outside the EU or becoming nothing more than an internationalist trading hub. This does not correspond to the clear racially-defined nature of this vote and the understanding of what the EU has been doing and intending to do at its core, to: “undermine the homogeniety” of European Nations (otherwise known as the Kalergi Plan).
Our vote is a rejection of the mechanisms (the erosion of our sovereignty, our control over policies) and the reality of the worst effect of the EU, which was mass-migration. That has been the primary, undeniable factor in why we won the referendum with our vote to Leave the EU. Because Leaving the EU is a means to the end of stopping migration and is the 1st step to retaking our nation in its entirety and reversing this unauthorised migration against the will of the people. This fact, which many have sought to deny, cannot be denied by any sensible analysis of the below graph. The gaping holes around urban, migrant-occupied areas are made especially clear in the proportional population map relative to the Leave/Remain vote. 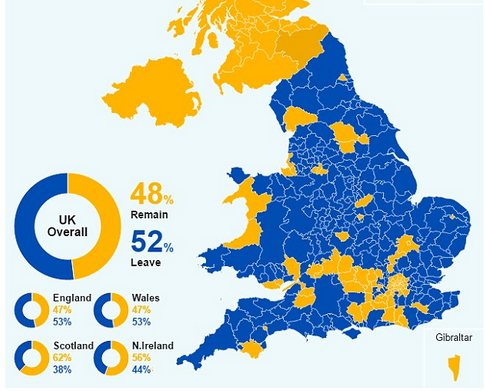 Subversive academics have tried to explain away our English People’s vote for freedom versus the European Union. The European Union, which in its origins is distinctly Jewish, in its ideological founders, its aims and in its modern, dysgenic promoters. Here are some examples of academic proportional graphs showing the vote in relation to the population size, as opposed to the above map which shows the country as it is with constituency boundaries defined. The Proportional chart above to the left shows wealth concentration. The Proportional chart above to the right shows the population concentration relative to vote (color). You will see that there is a correlation between population concentration and wealth (but only in London) but it is nowhere near the correlation trajectory you would need to see to say the vote was due to wealth. Additionally there is no correlation in areas outside of Londonistan. Just compare the size of london on the chart to the right with the one to the left.If wealth was the overriding factor you’d see a very close correlation. But it is not. Wealth is most certainly not the primary factor. They try to do this all the time, to explain things away with economics, when it is race that is at the core, which they admit in private and in their less publicised posts! These subversive academics are not interested in the truth, but only their subversive narratives.
There are many wealthy English individuals and families who voted and campaigned to Leave the European Union as well as poor areas that voted to Remain (inner city areas outside the Central Business Districts (CBDs)). Most of the financial and political elite did vote Remain, but still it is undeniable that wealth is not even a primary factor, with such small numbers of people compared to the overall population and other more significant factors.

However, knowing the racial composition of those areas on the map above, the most significant factor becomes clear: Race.

You cannot deny that all the areas (with the exception of Oxford and Cambridge, typical University population centres, etc: due to their high student population) that do not have high migrant populations voted to Leave. This is because in those areas there was a majority of English and related Northern European descended people who compose what we traditionally think of as ‘British’ – that oh so defiled term that is beyond salvaging. You notice the gaping hole where Londonistan resides in its putrid ethnic defilement, its ethnic displacement of our English nation who have sensibly moved out to the shires. These subversive academics haven’t published a chart showing race and the Leave vote, because it would make it so, so clear. Yet they complained post referendum of a “spike in hate crimes”, so they are fully aware that the Vote to leave was highly racialized. By the way, the spike in hate crimes was due largely to the paranoia of non-white immigrants and eastern European migrants reporting things that they ordinarily would not have due to their racialization in full knowledge of what our vote to reject the EU entails.

These subversive academics on their blogs have been talking about the racial nature of the Leave Vote and the rise of Englishness as the root of this. The chart linked at the top proves this beyond dispute. Almost 3 quarters of non-whites (who they are nowadays calling BME/BAME people) voted to Remain. Think about what that entails. 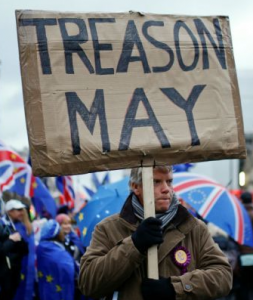 The 3 core principles of the EU are free movement of People, Goods and Capital, which are also the 3 core principles of Marxist economics. Our vote to Leave the EU was a rejection of this, it was not for a ‘global Britain’ – it was for an English England here in England, and so too the vote was similarly large in Wales, which has a predominantly closely related ancient population according to genetic studies. 1 million Scottish people voted to Leave the EU (only 38% but it shows there is substantial hope there). I recently produced a timeline of the betrayal of our vote to Leave, exposing the 4 year saga of our effort to Leave being betrayed by Treason May.
We English folk are starting to fly our Dragon Banner again and we will reclaim our nation and bring all of Europe along with us, we are the first over the top in this battle, this honour is ours but it is not yet won; let’s make sure it happens. The political establishment needs to know we are not willing to let them override the will of 17.4million of us here in England.
brexit future national racial