Declaring that the church “isn’t afraid of history,” Pope Francis said Monday he has decided to open up the Vatican archives on World War II-era pope Pius XII, who has been criticized by Jews for staying silent on the Holocaust.
Francis told officials and personnel of the Vatican Secret Archives that the archive would be open to researchers starting March 2, 2020.
Pius was elected pontiff on March 2, 1939, six months before World War II erupted in Europe. Pius died on October 9, 1958, at the Vatican summer residence at Castel Gandolfo, near Rome.
Vatican archivists had already started preparing the documentation for consultation in 2006, at the behest of Francis’s German-born predecessor, Benedict XVI.The Vatican usually waits 70 years after the end of a pontificate to open up the relevant archives. But the Holy See has been under pressure to make the Pius XII documentation available sooner and while Holocaust survivors are still alive. 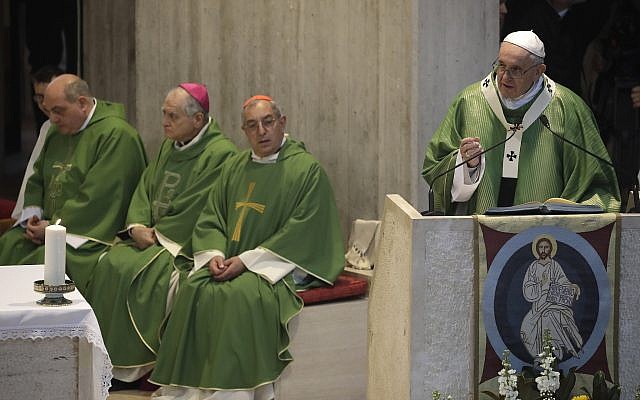 Pope Francis speaks during a Mass in the St. Crispino parish church, in the Labaro neighborhood, Rome, Sunday, March 3, 2019. (AP Photo/Alessandra Tarantino)
Pius has been accused by historians and Jewish groups of failing to speak out against the Holocaust, failing to commit the Church to saving Jews amid the genocide, and encouraging the conversion of Jews to Catholicism during the period.
The Vatican has defended him, saying he used behind-the-scenes diplomacy to try to save lives. Francis indicated he, too, embraced that interpretation.
Pius’s actions will be scrutinized as part of efforts underway to decide if he should be declared a saint. Francis indicated that the church was confident that the papacy would withstand the findings by historians studying the archives, saying Pius was “criticized, one can say, with some prejudice and exaggeration.”
“The church isn’t afraid of history, on the contrary, it loves it, and would like to love it even more, like it loves God,” Francis told staff at the archive.
“Thus, with the same trust of my predecessors, I open, and entrust to researchers, this patrimony of documentation.” 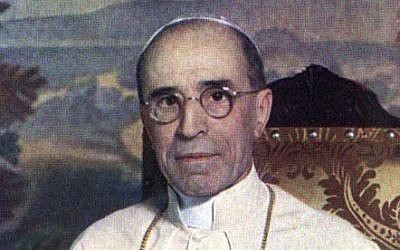 Pope Pius XII. (Wikipedia commons/Maximus0970/File)
Francis expressed certainty that historical research would properly evaluate Pius’s legacy “with appropriate criticism.”
He said the Pius papacy included “moments of grave difficulties, tormented decisions of human and Christian prudence, that to some could appear as reticence.” Instead, he said they could be seen as attempts “to keep lit, in the darkest and cruelest periods, the flame of humanitarian initiatives, of hidden but active diplomacy” aimed at possibly “opening hearts.”
One Jewish group calling for the archives’ release, the American Jewish Committee, said it comes after “more than 30 years” of advocacy.
“It is particularly important that experts from the leading Holocaust memorial institutes in Israel and the US objectively evaluate as best as possible the historical record of that most terrible of times, to acknowledge both the failures as well as the valiant efforts made during the period of the Shoah,” AJC’s Rabbi David Rosen was quoted by Reuters as saying.
In Israel, the decision was met with praise by the Foreign Ministry
“We are pleased by the decision and hope it will enable free access to all relevant archives,” ministry spokesman Emmanuel Nahshon said in a statement.
Israel’s Yad Vashem Holocaust memorial and museum welcomed the Vatican’s decision.
“For years, Yad Vashem has called for the opening of these archives, which will enable objective and open research as well as comprehensive discourse on issues related to the conduct of the Vatican in particular, and the Catholic Church in general, during the Holocaust,” the memorial said in a statement. “Yad Vashem expects that researchers will be granted full access to all documents stored in the archives.”
Jewish Agency Chairman Isaac Herzog also praised the move, saying it was a “brave and important step.”
He recalled that his grandfather, former chief rabbi Yitzhak Halevi Herzog, asked Pius during the Holocaust to “send me my people” but did not receive a response and later held a tense meeting with the pope after World War II.
accused holocaust open archives pope silence vatican WW2