Some people still continue to insist that this shooting actually happened, even though there are many “smoking gun” pieces of evidence that have been presented. I refuse to allow for this shooting to be seen as anything other than the complete hoax that it was. It was not a false flag; it was fake!
Let’s start with when the “gunman” first enters the mosque. He blasts some people in the hallway, then goes into the main room, starts shooting to the right, and then turns his head, but not his gun, to the other corner. Here is what we see. 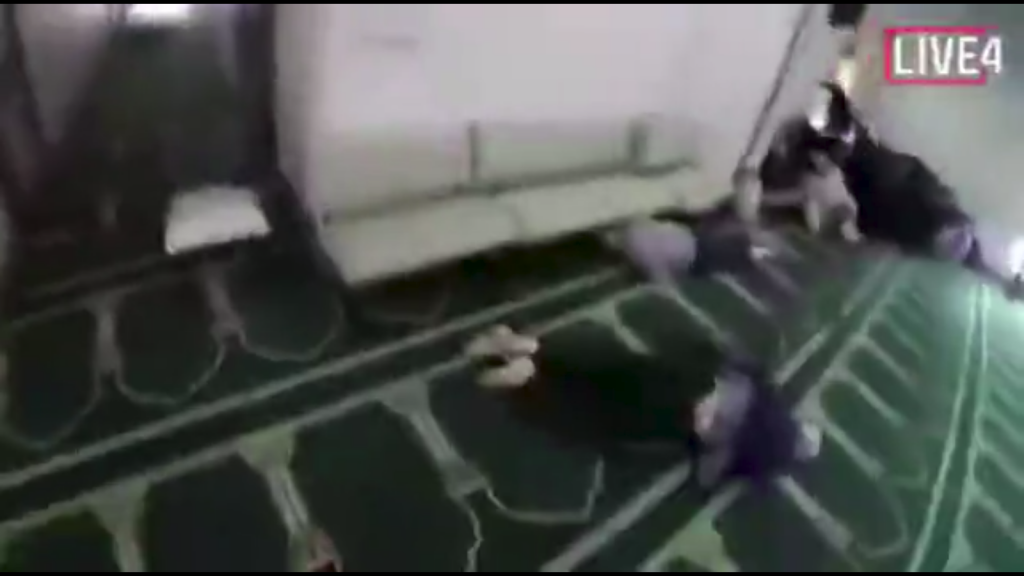 The dark blob in the corner, which we are to assume is a pile of bodies, has not been shot yet! It looks like a bunch of dark coats or something thrown together with a naked dummy sprawled out in front of it. This happens at 7:00 into the video. Go check for yourself if you think that any of these “people” could have been hit by bullets at this point. Also note the guy who is lying partially under the bench, as he plays the part of a key witness.
The “gunman” leaves the main room, reloads back in the hall, and then fires some shots in this general direction. You have to wonder why none of these “people” would have fled into one of the other rooms or out the window. They just lay there, waiting to be shot. 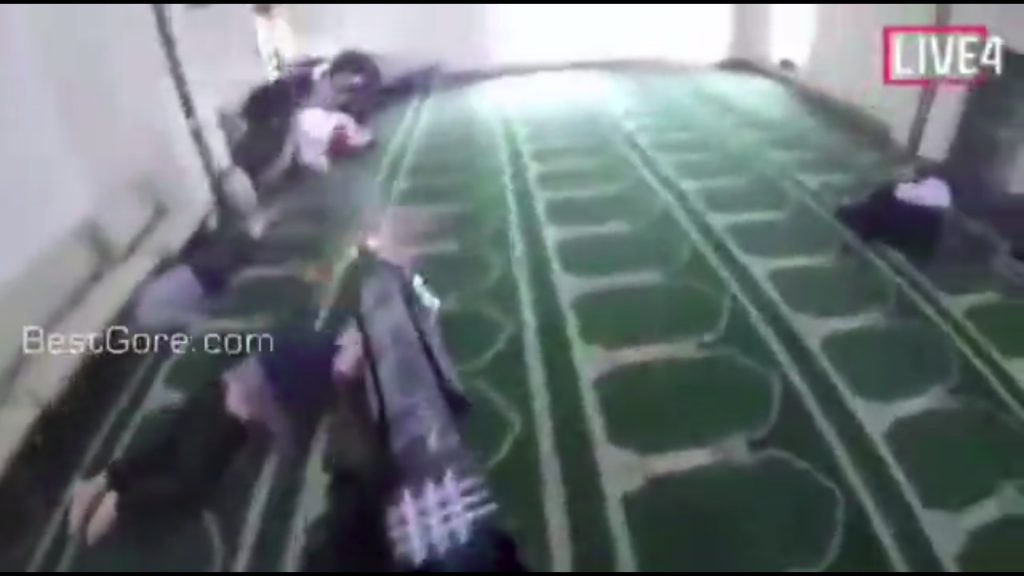 The “gunman” then leaves the building and comes back in to finish the job. Here is what we see in this same corner now. You will notice in this photo that the pile of darkness has now spread out a bit and transformed into what looks like actual bodies. What happened while the “gunman” went back to his car?
The guy under the bench, who did not get hit with any bullets (according to his own testimony!), did not get up and run out of the building in the meantime, but he did adjust his position. Here he is giving his testimony, telling us how he played possum to survive.
Now let’s turn to the other corner of the room. Here is what it looks like when the “gunman” first enters the building and starts shooting. 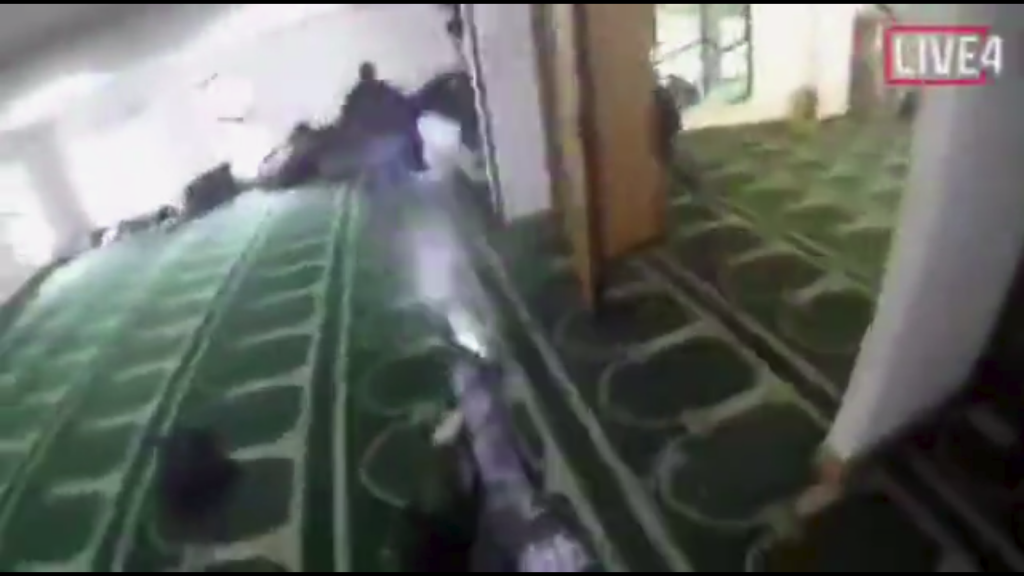 A couple people do drop down after the initial shots were fired and we are left looking at another blob. 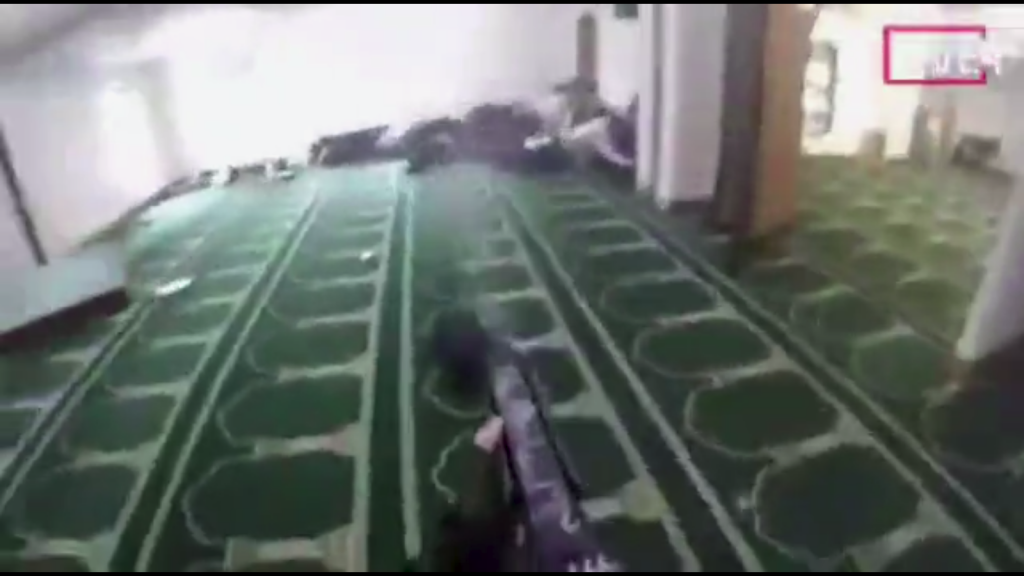 None of these “people” tried fleeing into the adjoining room, out any windows, or anything. They just waited to be shot while in a pig pile. Again, let’s take a look at what happens after the “gunman” leaves and then comes back in to give us a closer look and finish the job. 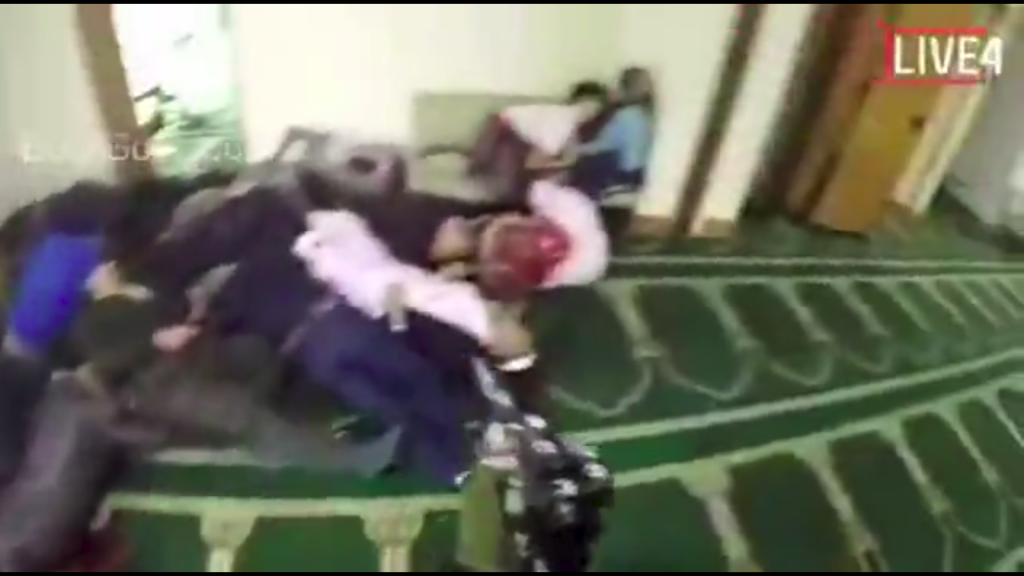 Only now, after the “gunman” has left the building for some time, are we able to see a close-up of face-down “bodies”. None of them are groaning or moving in any way, so the “gunman” must have been very accurate with his first round of shooting; he did not even need to come back in for the kill shots, because these “bodies” are not alive! You can see the open door that apparently no one even tried to run through, which would have been a natural reaction.
Here’s what I think happened. The “gunman” went in the first time firing blanks, as there were a few people running around and then playing dead. The “gunman” then left, at which time all real people were removed or replaced from the scene. When the “gunman” came back he fired actual rounds into the dummies at close range to give the whole scene more believability.
Sorry guys, but if you cannot see through this by now, you probably belong somewhere else. You can check out the Daily Stormer, where they want you to believe this was completely real and that the shooter is a great hero.
bodies mosque shooting pile proves total hoax