Some of the most well-known banks in the world are also the biggest money launderers. The recent Troika Laundromat affair added another $8 billion to the trillions financial institutions wash every year. Over $2 trillion is laundered annually by criminals who utilize various ways to hide money in banks, which are often complicit or at least willing to turn a blind eye. The following is a look at money laundering schemes used by criminal enterprises that use the world’s so-called ‘regulated’ banks as their main laundromat system.

Financial incumbents and politicians love to invade normal people’s everyday activities and they’d love to know how our funds are being spent right down to the last penny. At the same time, the banking system that they regulate is used to wash trillions each and every year using schemes like shell companies, bogus supply chain invoices, smurfing, and ‘mirror’ trades to hide funds that stem from illegal acts. In the last decade, few notable bankers or financiers have been jailed for financial crimes and money laundering save for Bernie Madoff. Many believe Madoff was only incarcerated because he stole from the banking cartel and shed light on their shady activities. 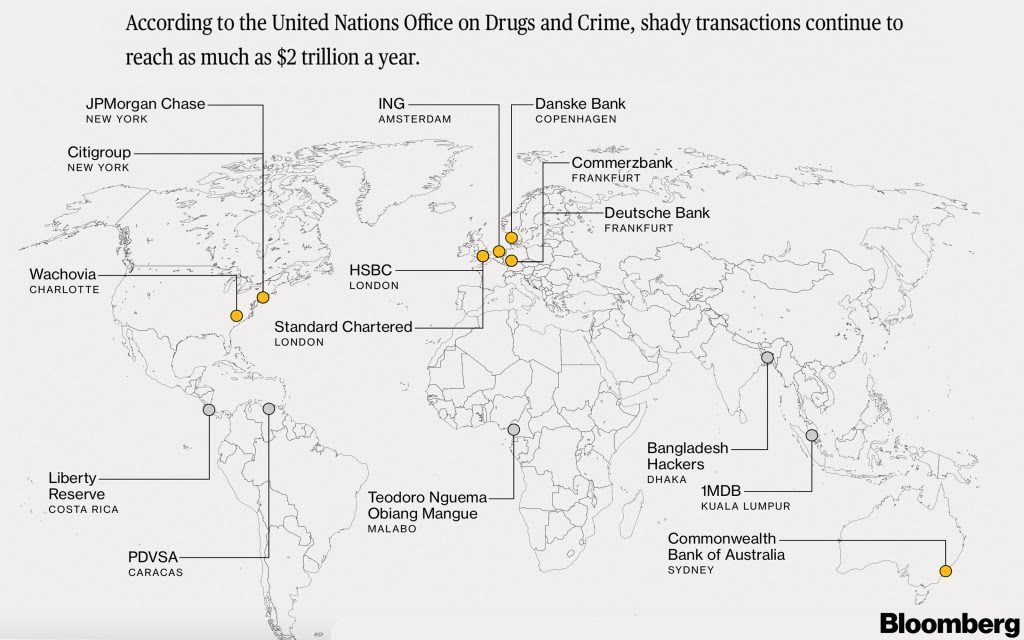 Since the last financial crisis, dozens of the world’s financial institutions have been caught laundering money and slapped with petty fines. Just recently, the Troika Laundromat scandal revealed that banks like Citigroup, Deutsche Bank, and Raiffeisen helped criminals wash $8.8 billion in a seven-year period. Illicit funds are moved and obfuscated from the public eye using the traditional banking system in a variety of ingenious ways.
Mirror Trading
Mirror trading is a financial strategy that is legal in certain jurisdictions. The mirroring method allows two identical trades to be executed, but the selected strategy of the two combined trades cancels each other out. However, funds are still moved from one location to the next using the scheme. As one Quora commenter explains:

A client opens up a trading account with Deutsche Bank in Moscow. The client deposits let’s say the equivalent of $10,000 in rubles in his account and asks the bank to buy that amount of blue chip shares on the Moscow stock exchange. The client has previously instructed the bank that the same shares are sold on the London stock exchange for GBP; both trades are executed within fractions of a second of each other. Voila. Clean as a whistle.

Back in 2017, Deutsche Bank paid more than $670 million in penalties for participating in mirror trades that stemmed from illegal activities in Russia. Money laundering scandals have proliferated at Deutsche Bank and the institution has paid more than $9 billion in fines since 2008. Many other well-known financial institutions have been caught assisting mirror trading offenses like Bank of America, J.P. Morgan, and Danske Bank Estonia.
Smurfing
Another popular move by banks is a method of laundering money known as ‘structuring’ or ‘smurfing.’ This involves conducting a large number of small transactions through a regulated bank, usually in a specific pattern to avoid triggering anti-money laundering alarms. Lots of banks located around the world have been caught smurfing or allowing customers to smurf. For instance, in 2017 the Commonwealth Bank Australia was accused of 53,700 structuring-related instances by Australia’s financial watchdogs. In 2015 the Supreme Court in Vancouver charged the Canadian Imperial Bank of Commerce for assisting such transactions and there are countless other financial institutions that are simply dubbed “smurf banks.”
Shell Companies
When people want to move shady money, lots of times they set up a fake business in order to hide the illegal proceeds. On some occasions, there are businesses that actually have operations like selling goods and services to obfuscate the illicit funds. But often, individuals set up ‘shell’ companies, which are basically incorporated or limited liability firms only on paper with no real operation inside them. 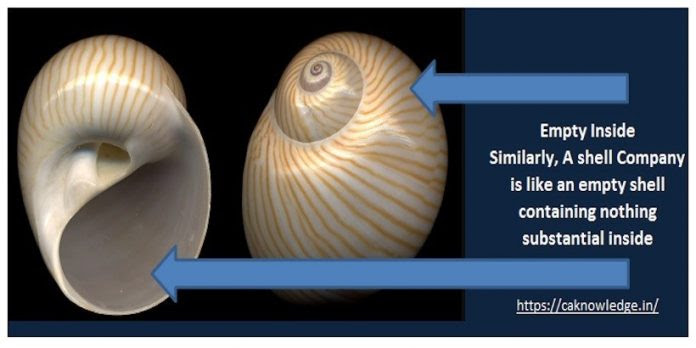 According to the group of journalists who unveiled the Troika Laundromat scandal, roughly 75 shell firms were created to help facilitate the process. In the spring of 2017, it was also revealed that about 21 shell companies were involved in a money-laundering scheme that took place between 2010 and 2014 that involved washing $21 billion in illicit funds. That particular escapade involved the use of the world’s top 50 banks including Credit Suisse, Deutsche Bank, Citibank, HSBC, Bank of China, and Royal Bank of Scotland.
Legitimate and Illegal Business Mixing
Just like the shell company example above, many banks have assisted people in mixing ‘dirty money’ with legitimate business practices. There are all types of sanctioned businesses people use to mix illegal funds with an authorized entity and one of the biggest schemes uses real estate. Many well-known financial incumbents have been caught red-handed assisting with the mixing of real estate sales and illegal proceeds. 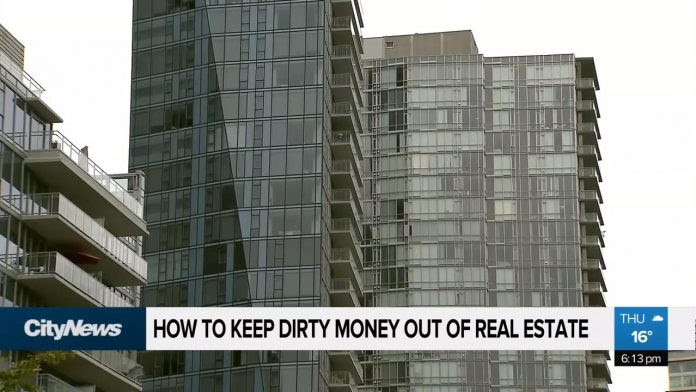 Selling properties and the real estate market, in general, is less scrutinized and in 2018 Denmark’s largest bank was accused of mixing clean and dirty money through the sale of properties. Another way criminals and politicians use banks to launder money is through the use of casinos and legal gambling. Back in 2014, the Department of Justice’s (DoJ) “Operation Choke Point” subpoenaed 50 banks in a casino money laundering ring in Las Vegas. The DoJ explained that banks like Wells Fargo, J.P. Morgan Chase & Co, and Bank of America were among the financial institutions involved.

While the Banks Wash Trillions and Get Slapped With Paltry Fines, Law Enforcement Focuses on Petty Cash and Bitcoin Sales

Financial regulators and law enforcement agencies around the world seem obsessed with busting normal people for moving small amounts of funds. Police and three-letter agencies dedicate a lot of energy toward ordinary citizens who move bitcoin or petty cash, but allow bankers to wash trillions without jail. Last year Rustem Kazazi, a U.S. citizen, had his life savings stolen ($58,100) from law enforcement and the TSA and Border Patrol at Cleveland Hopkins International Airport never charged him with a crime. In May 2017, entrepreneur Sal Mansy of Detroit, Michigan was charged by the DoJ and the District of Maine for selling bitcoins in an unlicensed manner. In fact, many Localbitcoins sellers have been prosecuted in the U.S. for being an illegal money transmitter and hit with money laundering charges. 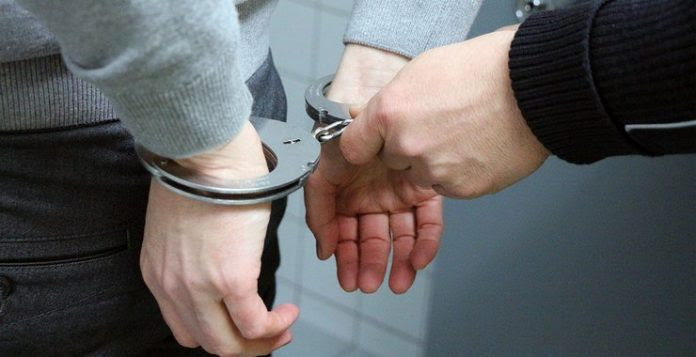 Unfortunately, the world’s bureaucracy continues to focus on banning cash and claiming cryptocurrency’s main form of use is money laundering. In reality, the central banks’ fiat money with currencies like the U.S. dollar and Japanese yen are the main vehicles for hiding shady funds. The status quo’s banking institutions are the main facilitators of these crimes and the magnitude of money they hide eclipses the entire cryptocurrency market cap by a long shot.
This article was sourced from Bitcoin.com
2 trillion dollars a year banks help launder leading the world