White Idiot Roger Stone desperately claims ‘crosshairs’ photo of judge is not threatening: ‘It is open to interpretation’

Trump confidante Roger Stone on Monday defended his decision to post an ominous photo of U.S. District Judge Amy Berman Jackson, who is overseeing his prosecution in special counsel Robert Mueller’s Russia investigation.
In a post on Instagram, Stone shared a photo of Jackson. Pictured beside her head was what appeared to be a crosshairs symbol.
View image on Twitter 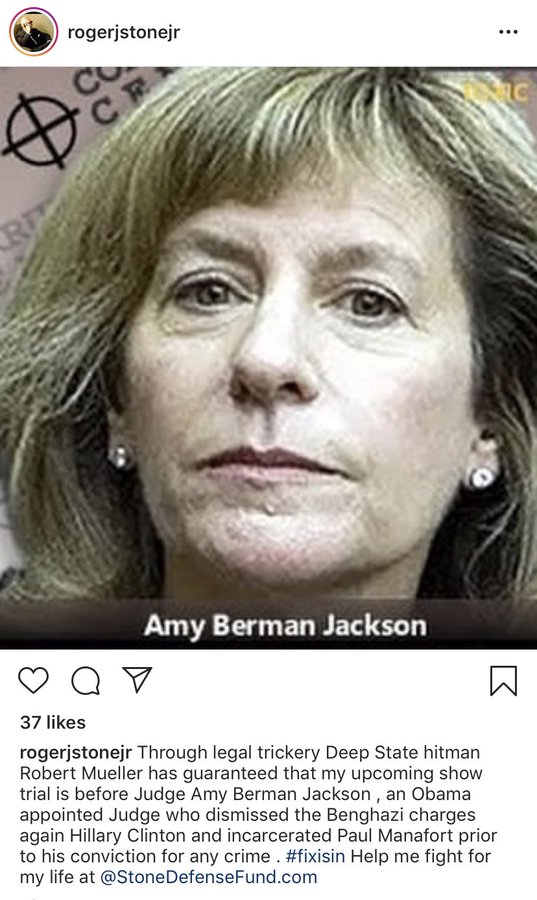 Jon Swaine ✔@jonswaine
Roger Stone now directly attacking the federal judge presiding over his case and posting a pic of her head beside crosshairs
8,376
1:12 PM - Feb 18, 2019

9,053 people are talking about this
Twitter Ads info and privacy
Stone eventually took down the post, and told the New York Daily News that he had not seen the crosshairs symbol beside Jackson’s head.
He later told CBS News reporter Kathryn Watson that the photo was not intended to threaten the judge, and that he did not violate a gag order in the case.
“I do not believe that I have violated any order of the court,” Stone insisted, “and that this sentiments for [sic] within my first amendment rights.”
“Any interference that this in someway threatens the judge is false,” he added. “Because it is open to interpretation I’m going to take it down.”
View image on Twitter

Kathryn Watson ✔@kathrynw5
Roger Stone texts me this in response to my inquiry about his Instagram post of Judge Amy Berman Jackson that featured crosshairs in the background:
1,720
2:29 PM - Feb 18, 2019