Senate Majority Leader Mitch McConnell (R-KY) said Thursday that members might be voting to pass a funding measure to keep the government open, but he expects President Donald Trump to declare a national emergency.
Trump has been making the threat for over a month and Sen. Lindsey Graham (R-SC) warned this move by Trump was likely.
Speaker Nancy Pelosi (D-CA) said that she would not fund Trump’s 2,000-mile concrete border wall, but would be willing to fund extensive border security measures and fund 55 miles of a fence. Trump said he was “not happy” about the agreement.
Conservative influencers like Ann Coulter, Lou Dobbs and Sean Hannity are all opposed to the deal because it doesn’t fully fund the wall the president pitched to the American people. That said, the president also said the wall would be funded by Mexico, not the American taxpayer.
According to the New York Times, Trump spent hours calling the right-wing advisors at Fox to beg them not to criticize the bipartisan deal.
“Nobody got everything they wanted,” said House Majority Leader Steny Hoyer (D-MD) in an MSNBC interview. He noted there are more pressing issues in the country than the border. He said, specifically, Director of National Security Dan Coats didn’t even name it as a top priority among his international threats.
According to a Pew poll, unauthorized immigration and refugee claims have actually fallen to historically low levels, despite the president’s claim of a “crisis.”
Sen. John Cornyn (R-TX) warned the president against it in an interview with Politico earlier this month.
“The president’s going to get sued and it won’t succeed in accomplishing his goal … [Speaker Nancy] Pelosi will introduce a resolution of disapproval that will pass the House and come over here and divide Republicans,” he said. “It strikes me as not a great strategy.”
Lawsuits are almost certainly en route. The president has said that he thinks the courts will uphold his decision that this is a national emergency. Even if the courts strike it down, Trump will be able to tell his supporters that he did whatever he could to get the wall.
If Pelosi takes the route Cornyn suggests, Republicans will be put in an awkward position, particularly those running for reelection in 2020. If they vote against Trump, they could end up with a primary challenger supported by the president. If they vote against it, they will probably alienate moderate and independent voters in the general election.
“He’s threatening to declare a national security state of emergency and unilaterally deploy troops with Pentagon funding to build the wall,” wrote Heather “Digby” Parton. “This is a shocking idea, but it shouldn’t be too much of a surprise. After all, Trump invoked a rarely used national security provision in trade law to unilaterally slap tariffs on steel and aluminum.
When asked if she was filing a lawsuit, she said she hasn’t yet, but she “may.” When speaking to reporters Thursday, Pelosi cited the separation of powers outlined in Article I of the U.S. Constitution that gives to Congress. She also gave a hint of a warning to Senate Republicans about this precedent that could give a Democratic president the ability to declare his or her own national emergencies at will.
“Want to talk about a national emergency, let’s talk about today, the one-year anniversary of another manifestation of the epidemic of gun violence in America,” she continued. “That’s a national emergency. Declare that an emergency, Mr. President, I wish you would. But a Democratic president can do that. So the precedent the president is setting here is something that should be met with great unease and dismay by Republicans and we respond accordingly when we review our options.”
Watch McConnell below: 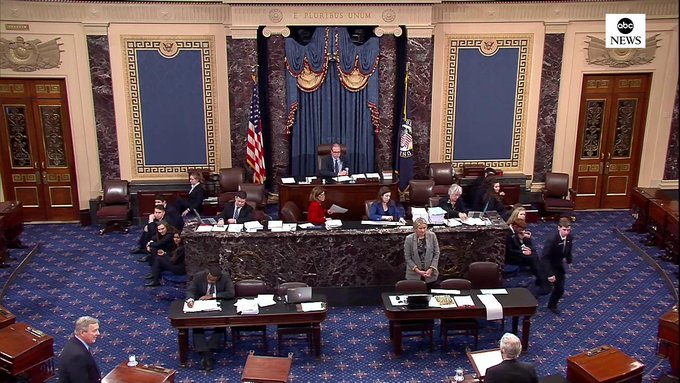 - January 14, 2019
https://www.jta.org/2019/01/11/politics/5-jewish-things-to-know-about-kamala-harris?utm_source=JTA%20Maropost&utm_campaign=JTA&utm_medium=email&mpweb=1161-8285-19708
WASHINGTON (JTA) — Kamala Harris, the junior senator from California, is reportedly set to announce her bid for the Democratic presidential nod. Harris, 54, is a progressive on most issues who draws some ire from the left for her tough-on-crime posture when she was California’s attorney general. She pleased Democratic hearts, meanwhile, with her tough treatment of President Donald Trump’s second Supreme Court nominee, Brett Kavanaugh, during his Senate confirmation last year. The daughter of a mother who immigrated from India and a father who immigrated from Jamaica, Harris has some Jewish nuggets in her history.
She smashed a glass at her wedding She met her Jewish husband, Douglas Emhoff, on a blind date in San Francisco, arranged by friends. They married in 2014 — Harris’ sister Maya officiated — and smashed…
Read more

- June 09, 2020
https://dailyarchives.org/index.php/reports/3188-miss-hitler-pageant-entrant-and-her-partner-jailed-for-belonging-to-national-socialist-group
A former Miss Hitler pageant entrant and her partner have been jailed in the UK for belonging to the patriotic group National Action. (CNN) Tuesday's sentencing comes after Alice Cutter, 24, and her partner Mark Jones, 25, were convicted of membership of a "terrorist group" at a trial in March, alongside Garry Jack, 24, and Connor Scothern, 19, West Midlands Police said in a statement. National Action became the first nationalist group to be banned under Britain's terror laws in December 2016. It is a criminal offense in the UK to be a member of the organization, which has been described by the country's Home Office as "virulently racist, anti-Semitic and homophobic. According to police, the four became members of the NS group and met regularly to share their ideology and attend demonstrations. When the organization was…
Read more