‘Time for a Plan B’: New report says Trump may have botched his ‘national emergency’ — a big chunk of his wall money has already been spent

President Donald Trump now plans to build his border wall under the guise of a “national emergency.” The declaration, announced last Friday, will theoretically empower the president to divert $3.6 billion from military construction projects, $2.5 billion from federal counternarcotics programs, and $600 billion from the Treasury Department’s asset forfeiture fund to start constructing a barrier at the southern border, on top of the $1.35 billion that was allocated for border construction in the compromise bill passed by Congress to avert another shutdown.
There’s a problem, though: Trump probably can’t spend all that money. That’s because, according to Congressional Quarterly writer John Donnelly, more than a third of that money has already been spent!
View image on Twitter 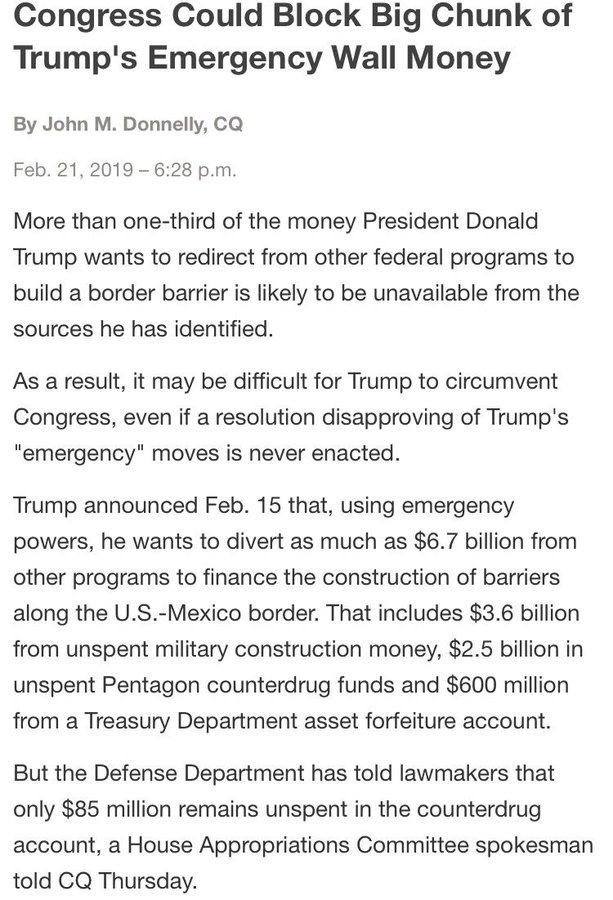 John M. Donnelly ✔@johnmdonnelly
BREAKING: More than a third of the federal

@realDonaldTrump wants to redirect to build a #BorderWall is not available. It’s been spent. Congress—including Dems—would have to approve making new

2,669 people are talking about this
Twitter Ads info and privacy
That means that, right from the start, Trump is working with billions fewer than he had planned for.
And that assumes he will be allowed to spend it at all. On Thursday, House Democrats released a resolution to block Trump’s declaration under the National Emergencies Act, and Senate Democrats have their own version in the works. If either of these passes, the other chamber is required to take it up, and it is not clear whether Republicans have yet whipped the votes necessary to affirm the president. Meanwhile, 16 states have banded together in a lawsuit to block the emergency declaration in federal court.
The upshot of this is that the only money Trump is absolutely guaranteed to have for construction at the border is the $1.35 billion he received from Congress, which theoretically would pay for just 55 miles of fencing. And even there, Democrats put heavy restrictions on how Trump can use that money: only existing designs, no construction in five sensitive areas including the National Butterfly Center, and the Department of Homeland Security must consult with local governments before any new barriers can be built.