The following article is taken from Addendum S of The Noble Protagonist’s 1,100 page E-book, “The Battle to preserve Western Civilization (European Folk Soul vs. Jewish Supremacy). This text was originally derived from sections of the article, “Straight Outta Compton, Did The CIA Infiltrate Rap Music?”, posted on Newspunch.com.
Free E-Book available at: http://www.battleforthewest.com/
For more info on International Jewry and its influence over Gangsta Rap music, check out Kyle Hunt’s video, “White Genocide, Anti-White Rap Music & Prison Profits”, linked here: http://www.battleforthewest.com/white-genocide-anti-white-rap-music-prison-profits/
1986 had been the Year of Crack. Newsweek called crack a “national scandal”. In October 1986, the LA Times carried a story about Chief Darrell Gates and the Los Angeles Police Department (LAPD) “quietly disbanding” its thirty-two-member anti-crack force in South Central Los Angeles. Reverend Charles Mims, a South Central minister said, “It seems illogical to move this task force from what most everybody grants is the most active rock cocaine area on earth.” By a conservative estimate, crack cocaine was at least a $10 million a month industry in Compton & South Central that was deliberately allowed to happen.
The first to popularize “Gangsta” Rap was group, N.W.A., which came onto the scene in 1986. Their music was perfectly suited to stigmatize & demonize Black youth of the inner city as virtual savages. Gangsta Rap has it all; inhumane unmitigated hatred & violence, criminality, inherited evil & wickedness, demonic possession, spiritual warfare and threats against public order & peace.

The evil in my blood is possessed. So I creep low from the back slow and puts lead in that niXXa’s flesh. Ain’t no hope, every niXXa wants to be the nine milla on the trigga. The black niXXa killa!” -Eazy-E (N.W.A.) 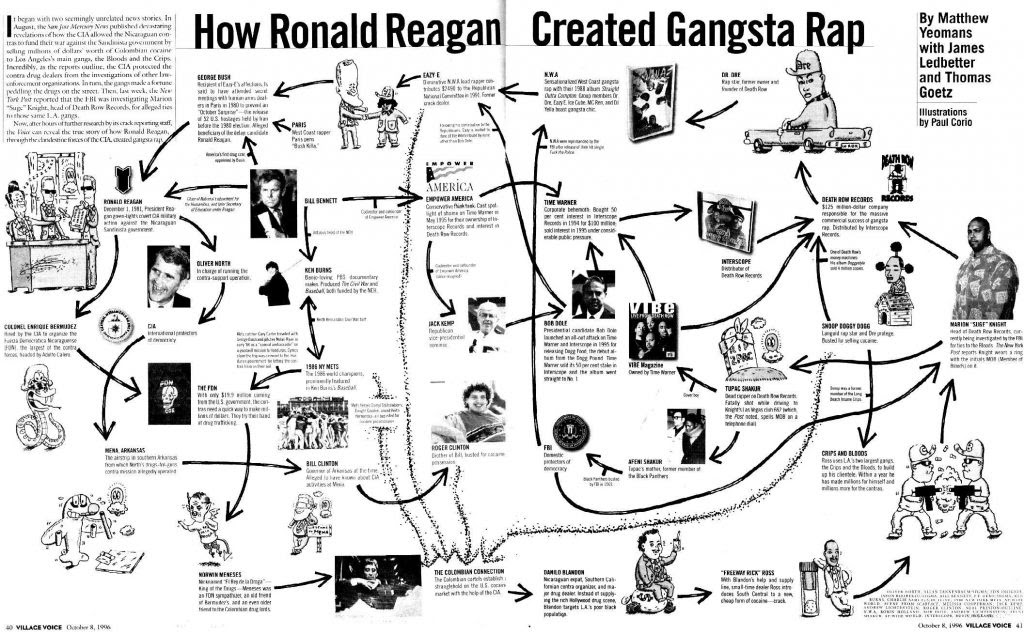 In 1981, President Ronald Reagan authorized CIA covert military action against the democratically elected Sandinista government of Nicaragua. The CIA hired Nicaraguan Colonel, Enrique Bermudez, to mobilize an illegal insurgency. Bermudez founded the Fuerza Democratica Nicaraguense (FDN). The FDN was the largest, the most well-armed and best-trained of the Contras. To help fund the insurgency, the Contras turned to trafficking Colombian Cocaine in the United States with the collaboration of the National Security Council (NSC) and the CIA.
In August 1995, the San Jose Mercury News published Gary Webb’s devastating revelations of how the CIA allowed the Nicaraguan Contras to fund their insurgency war against the Sandinista government by selling millions of dollars worth of Columbian cocaine, which primarily targeted inner-city Blacks. Their collaborators within the inner-city were the Crips & Bloods of Compton & South Central Los Angeles.
The CIA shielded Contra cocaine gang suppliers like Nicaraguan Oscar Delano Blandon from investigation for drug trafficking. Blandon was a co-founder of the FND. As result of their bargain with the Crips & Bloods, they made millions, not only for themselves and Contra’s unlawful insurgency war in Nicaragua, but for the CIA and & Israeli Mossad.
The men behind N.W.A.’s record company, Ruthless Records, were Eazy-E & Jerry Heller (Jew) and Michael Klein (Jew). Heller was the co-founder of N.W.A., and CEO of Ruthless Records. The Jewish Defense League (JDL) was on the payroll at Ruthless Records. It is interesting that Heller & Klein called in the JDL, instead of the police, when they claimed to be under threat from Suge Knight, of Death Row Records, and the Piru Bloods (gang) when Dr. Dre (N.W.A.) wanted to leave Ruthless Records.
The JDL was founded by Rabbis Meir Kahane & Joseph Churba in the mid-1960s. The JDL is a notorious CIA cutout and a U.S. domestic arm of Israeli intelligence services, the Mossad.
Michael Harari, a longtime top agent of Israeli foreign intelligence, the Mossad, was a security adviser to Panamanian Defense Forces General Manuel Noriega. As the Mossad station chief for Central & South America in the late-1970s and into the 1980s, until the U.S. invasion of Panama, after which he returned to Israel, Harari coordinated the Mossad’s gun-running & drug-trafficking operations in South America. Michael Harari was in charge of “Operation Watchtower, the program of drugs to LA gangs, in exchange for money, which went towards guns for Nicaragua.
Los Angeles was a major site of the CIA-Contra connection to crack cocaine in the 1980s. Both Eazy-E & Suge Knight were involved in gang-related crack cocaine rings at that time. Crack cocaine, which was deliberately infiltrated into the South Central & Compton community, created millionaires, like “Freeway” Ricky Donnell Ross.
In 1994, the connection between Los Angeles, Iran Contra and crack cocaine gangs began to break. Nicaraguan Oscar Danilo Blandon, the key Contra cocaine supplier of “Freeway Ricky Ross” and other distribution networks, related to Ruthless & Death Row, turned into a U.S. Drug Enforcement Agency (DEA) informer. Blandon exposed Ross’s crack cocaine connection & networks in LA.
In the aftermath of Blandon’s informing, the CIA & Mossad, and most of the non-Black players behind the scenes of the crack cocaine crisis, like Heller & Klein and the JDL walked, profiting handsomely from complicity & conspiracy in crack cocaine trafficking.
Oscar Danilo Blandon supplied around 5,000 kilograms of cocaine & guns to the Crips & Bloods gang networks causing death & destruction across the United States. Blandon & FDN made so much cash from drug trafficking that they had to stash $250 to $300 million by the truck loads in different locations across the country because it couldn’t be moved out of country. Blandon walked away from federal drug trafficking (kingpin) charges, setting up “Freeway” Rick Ross as a unfortunate patsy & Black bogeyman for the benefit of International Jewry.
Gangsta Rap is destructive! Gangsta Rap was, and still is, a ploy by International Jewry to convince Black People to murder each other. It is controlled propaganda (agitprop) to dehumanize Black people in the media. In return commercial Hip-Hop music becomes degenerate and breaks down the moral fiber of American society and the Western civilization. The Prison Industrial Complex gets rich and racial animosity grows more intense each summer. Say “No” to drugs & Gangsta Rap!
Note: Just as International Jewry has financed both the radical pro-Black, anti-White, cultural movements of the late-1960s and then “Blaxploitation” degenerate era of the early-1970s, it has done the same in the 1980’s. Def Jam records in New York, run by Russell Simmons and two Jews, Rick Ruben (Music Producer) & Lyor Cohen, and its distributor, the Jewish-controlled Universal Records, popularized & commercialized a radical pro-Black, anti-White, rap group, known as Public Enemy, who promoted the Masonic teachings of the Nation of Islam. A few years later, the destructive Gangster Rap era began with the Jewish-financing of N.W.A. in Los Angeles. Rap now became a global phenomenon and multi-billion dollar Jewish industry.
Note: For info on the “Untold relationship between Jews & Blacks”, refer to Addendum R, in the back of The Noble Protagonist’s free E-book.  For info on “Using Hip-Hop to counter Jewish Power”, refer to Addendum G.  Linked here: http://www.battleforthewest.com/
CIA gangsta rap mossad