Showing posts from February, 2019
Show all

https://dailyarchives.org/index.php/events/2271-national-socialists-filmed-marching-with-torches-at-hitler-s-nuremberg-rally-arena?utm_source=D5&utm_campaign=a5e2b22242-WR-News+Campaing+1st&utm_medium=email&utm_term=0_70e342152e-a5e2b22242-48298879 Members of a National Socialist group face criminal charges in the zionist occupied Germany after staging a torch-wielding march through parts of Nuremberg used by Adolf Hitler to stage rallies in the 1930s. ( Independent ) Saturday's procession, which included those affiliated to the patriotic National Democratic Party (NPD) and Wodan's Erben Germania, began at a hostel for refugees in the Bavarian city. Police asked the gathering to disband but the group, dressed in black, later re-assembled and marched towards Nuremberg's former NSDAP rally grounds holding lit torches. Members of the group posed on the Zeppelinfeld tribune, an arena which was once adorned by a large swastika that provided seating for
Post a Comment
Read more

- February 28, 2019
https://www.rawstory.com/2019/02/new-economic-stats-blow-up-trumps-promises-of-long-term-economic-growth-as-tax-cuts-flop-cnbc-anchor/ CNBC editor at large John Harwood told MSNBC on Thursday that the new Congressional Budget Office report blows up Trump’s promises of up to 6% economic growth, and despite his tax cuts, worker take home pay hasn’t increased. “The president and his economics team promised tax cuts and deregulation would lift America’s gross domestic product, or GDP as most people call it, above 3%, and keep it there,” said host Stephanie Ruhle as she introduced her guest. “The new numbers indicate that the economy slowed less than expected, that is good, but we are already seeing signs of slowing in the first quarter of 2019 especially in manufacturing.” “This has been a long standing Republican theme,” Harwood said, reminding viewers that the GOP promised better economic growth than under Obama. “What we’ve seen today from these numbers is that Trump
Post a Comment
Read more

Trump biographer says people will be ‘shocked’ by the president’s finances: ‘He has the lifestyle of a billionaire’ — but no wealth

- February 28, 2019
https://www.alternet.org/2019/02/trump-biographer-says-people-shocked-by-the-presidents-finances-he-has-the-lifestyle-of-a-billionaire-but-no-wealth/ https://youtu.be/dcV2LsIRFEI During his February 27 testimony before the House Oversight Committee, President Donald Trump’s former personal attorney, Michael Cohen, observed, “It was my experience that Mr. Trump inflated his total assets when it served his purposes.” And when journalist/author David Cay Johnston appeared on CNN the morning after Cohen’s testimony, he explained why the attorney’s statement on Trump’s finances was quite accurate—and why Trump isn’t as wealthy as he would have people believe. The 70-year-old Johnston (author of the 2018 book “It’s Even Worse Than You Think: What the Trump Administration Is Doing to America” and 2016’s “The Making of Donald Trump”) has been writing about Trump’s finances for decades, and he told CNN’s Alisyn Camerota that exaggerating his net worth is nothing new for The Donald.
Post a Comment
Read more

- February 28, 2019
https://www.alternet.org/2019/02/trump-should-be-worried-that-gop-allies-botched-the-michael-cohen-hearing-former-federal-prosecutor/ Former federal prosecutor Ken White thinks President Donald Trump should be very concerned about his House Republican allies and their completely ineffectual attempts to hurt the credibility of former “fixer” Michael Cohen. Writing in  The Atlantic , White argues that both Republicans and Democrats missed major opportunities during Wednesday’s explosive Cohen testimony, but he says the ineptitude of GOP lawmakers was on a different level. “House Republicans needed a trial lawyer—or even a moderately bright junior-high mock-trial participant—to tell them how to do anything,” he said. “They provided Cohen with one slow pitch up the middle after another, letting him repeat the cooperating witness’s go-to explanation like a mantra: I did these bad things so often and so long because that’s what it took to work for your guy. I have seldom seen
Post a Comment
Read more

- February 28, 2019
https://www.rawstory.com/2019/02/trump-chief-staff-kept-paper-trail-president-ordered-grant-kushner-top-secret-clearance-report/ President Donald  Trump ordered his chief of staff to grant his son-in-law Jared Kushner top-secret security clearance  last year in spite of intelligence officials’ warnings. The  New York Times  reported that the decision in May 2018 concerned then-Chief of Staff John Kelly so much, he “wrote a contemporaneous internal memo about how he had been ‘ordered’ to give Mr. Kushner the top-secret clearance.” The report noted that then-White House counsel Don McGahn also wrote a memo about security concerns regarding Kushner — including those raised by the CIA. The memo also included a recommendation McGahn received that the president’s son-in-law not be granted the clearance. Trump claimed in a January interview with the  Times  that he had no role in Kushner’s clearance.
Post a Comment
Read more

- February 28, 2019
Deborah Tavares told us about the fires that were going to take out large parts of California before they did, now she is warning about imminent flooding. Trust her or not, you should probably listen. http://www.renegadetribune.com/deborah-tavares-floods-are-planned-climate-control-and-weather-weapon-disasters/ https://youtu.be/Dx5gb63Kgc8
Post a Comment
Read more

- February 28, 2019
http://www.renegadetribune.com/unhrc-israel-intentionally-shot-children-medics-in-gaza-protests/ Renegade Editor’s Note : Of course the (((UN))) as a whole will never move against Israel in a serious way. ( MEMO ) Israel deliberately targeted children and journalists during peaceful protests in Gaza, putting them in breach of international law, the United Nations Human Rights Council (UNHRC) said in a  report  today. The UNHRC found that footage from the scene, eye witness accounts and medical records have shown  that Israeli soldiers opened fire on medical staff and journalists covering the  “Great March of Return” . Two  journalists  and two  medical workers  were killed by live ammunition, and 39 of each were injured between 30 March and 31 December 2018, despite their protected status under international law. They also found that women and  disabled people  were targeted by Israeli soldiers. READ:  Palestinian child was 150 metres from Gaza fence when killed by Israe
Post a Comment
Read more

Government Research Confirms Measles Outbreaks Are Transmitted By The Vaccinated 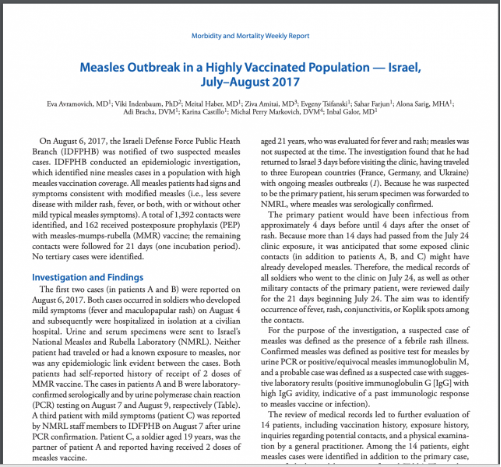 http://www.renegadetribune.com/government-research-confirms-measles-outbreaks-are-transmitted-by-the-vaccinated/ By   Sayer Ji One of the fundamental errors in thinking about measles vaccine effectiveness is that receipt of measles-mumps-rubella (MMR) vaccine equates to bona fide immunity against measles virus. Indeed, it is  commonly claimed  by health organizations like the CDC that receiving two doses of the MMR vaccine is “97 percent effective in preventing measles,” despite a voluminous body of contradictory  evidence from epidemiology and clinical experience . This erroneous thinking has led the public, media and government alike to attribute the origin of measles outbreaks,  such as the one reported at Disney in 2015  ( and which lead to the passing of SB277 that year, stripping vaccine exemptions for all but medical reasons in California ) , to the non-vaccinated,  even though 18% of the measles cases occurred in those who had been vaccinated against it  — hardly the v
Post a Comment
Read more

- February 27, 2019
https://www.jta.org/quick-reads/noting-fathers-holocaust-survival-michael-cohen-calls-trump-a-racist-and-conman WASHINGTON ( JTA ) — Prepared testimony by Michael Cohen, Donald Trump’s former fixer, says the president is a con man and a racist, and again cites his father’s survival of the Holocaust to explain why he turned on his one-time mentor and employer. “My father survived the Holocaust thanks to the compassion and selfless acts of others,” Cohen says in a statement posted midnight and set to be delivered Wednesday in dramatic testimony to the U.S. House of Representatives. “He was helped by many who put themselves in harm’s way to do what they knew was right.” “Mom and Dad … I am sorry that I let you down,” the testimony says. Cohen, Trump’s longtime lawyer, has pleaded guilty to fraud and violating campaign finance laws when he paid off Trump’s alleged mistresses to keep silent and to lying to Congress about how long into the presidential campaign Trump was working o
Post a Comment
Read more
More posts