Vandals broke into a synagogue in the Jerusalem neighborhood of Kiryat Yovel overnight Monday and damaged the prayer house, throwing Torah scrolls and other Jewish artifacts onto the floor.
“We arrived this morning for prayer and we saw the synagogue completely upside-down,” worshiper Yisrael Levy told the Ynet news site. “The burglars tried to break into the ark and when they did not succeed, they cut into it and threw all the Torah scrolls on the floor,” he said, referring to the ornate cabinet where the scrolls are kept.
Levy, who serves as a lay leader for the Siach Yisrael French-speaking community, said there was no friction between worshipers and people outside the community, adding that there are no security cameras located nearby.
Police said in a statement that a forensic team was immediately sent to the scene and an investigation into the incident has been opened. They later announced the formation of special task force to investigate the attack.Many members of the community are French immigrants to Israel, Hadashot TV news reported, saying they had left France to escape anti-Semitism and felt they were now experiencing it in Israel. 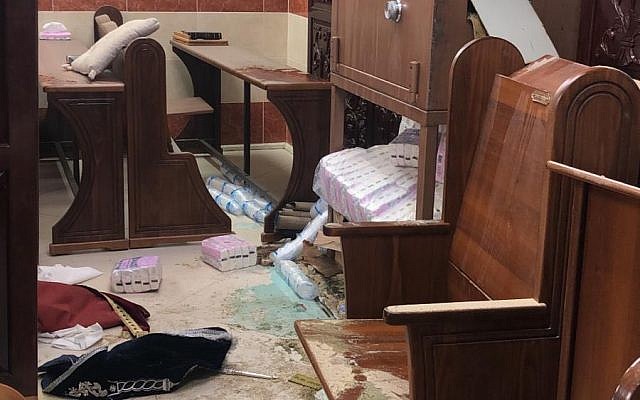 A Jerusalem synagogue where vandals reportedly broke in, January 29, 2019 (Police Spokesperson’s Unit)
Prime Minister Benjamin Netanyahu issued a statement saying he was “shocked” by the attack, adding that he hoped the perpetrators would soon be caught and brought to justice.
Interior minister and head of the ultra-Orthodox Shas party Aryeh Deri said the attack was an “outrageous anti-Semitic pogrom at a synagogue here in the Land of Israel.”
He added, “There is no Jewish heart that is not afraid of such scenes.”
President Reuven Rivlin tweeted from his personal account that the images from the synagogue were “hard and painful.”
View image on Twitter 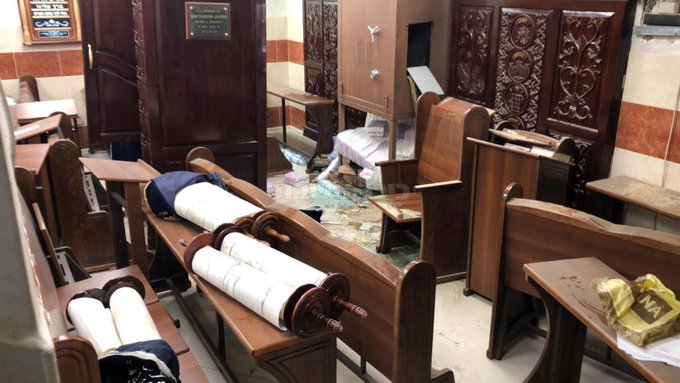 39 people are talking about this
Twitter Ads info and privacy
Jerusalem Mayor Moshe Lion condemned the attack as “a grave event reminiscent of dark periods of the Jewish people,” and said he was confident police would find the perpetrators.
Dan Illouz, who sits on the Jerusalem municipal council, wrote in a Facebook post that the attack was particularly sad as many members of the Siach Yisrael community had left France to escape persecution. He said that the city must come together and “fight the hatred of those who try to divide us with more love and better relations among the different sectors in the city.” 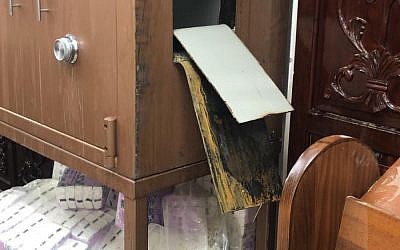 Synagogue vandalized in Jerusalem, January 29, 2019 (Police Spokesperson’s Unit)
The chairman of the National Union party, Bezalel Smotrich, also commented on the attack, saying: “These are difficult scenes that are reminiscent of dark days in the history of our people.”
The incident comes just days after vandals burned Jewish prayer books and graffitied the phrase “Hail Satan” in an attack on a Netanya synagogue. A pentagram was also discovered sprayed onto a wall.
Police are investigating Saturday’s incident at the Orthodox place of worship on McDonald Street, popular among English-speaking residents of the coastal city. 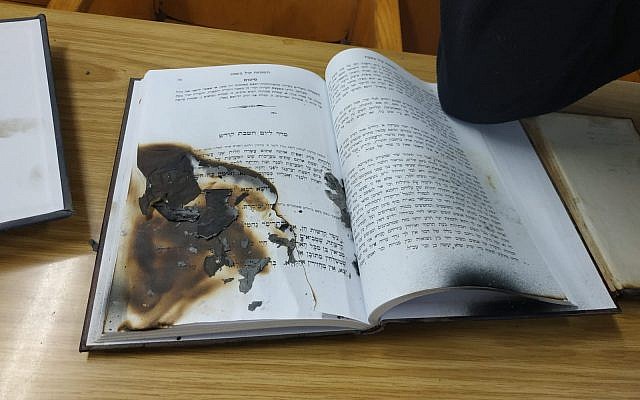