U of Georgia TA: ‘Some White People May Have To Die…”

(Campus Reform) A University of Georgia (UGA) teaching assistant wrote Wednesday on Facebook that “some white people may have to die for black communities to be made whole in this struggle to advance to freedom.”
“Killing some white people isn’t genocide; it’s killing some white people,” the UGA TA explained in a Medium post.
“We had to kill some white people to get out of slavery. Maybe if we’d killed more during the 20th century we still wouldn’t talk about racialized voter disenfranchisement and housing, education, and employment discrimination. This should not be controversial.” 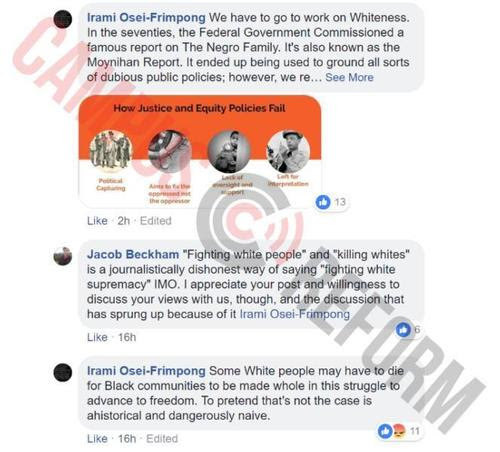 Osei-Frimpong’s Wednesday comment, seemingly inspired by Curry, is far from the first racially-charged remark made by the scholar.
“Fighting white people is a skill,” the UGA TA tweeted on Jan. 12, adding that it is why he supports integrated schools.
“You have to get used to fighting White people. It takes practice.”
He then quoted American clinical psychologist Bobby Wright, saying, “Blacks kill Blacks because they have never been trained to kill Whites.” Last semester, at a Young Democrats meeting, Frimpong compared Southern whites in America to “sociopaths” and “autistic kids.” Later on, in November, he called for Democrats to “wage war on the white electorate” and wrote that white “institutions” that “make crappy white people” such as churches, schools, and families must be “dismantled.” Facebook subsequently gave Osei-Frimpong a temporary suspension.
Despite the TA’s history with controversial racial rhetoric, UGA has chosen not to take any action.
Regarding his latest comments, a spokesperson at UGA’s Equal Opportunities Office said in an email obtained by Campus Reform that Osei-Frimpong’s views expressed his “personal opinion,” in his “personal capacity,” on a private platform.
The spokesperson also asked the recipient of the email to contact their office if any information was discovered that showed Osei-Frimpong made “discriminatory or harassing comments” in his capacity as a member of the UGA community.
Some of Osei-Frimpong’s UGA colleagues have gone as far to defend his previous comments about white Americans. UGA Associate Professor of Brain and Behavioral Science Dr. Janet Frick once tweeted that the TA’s comments were not hate speech, but rather “hurt your feelings speech.”
Campus Reform reached out to Osei-Frimpong for further comment but did not receive a response in time for publication.
This article originally appeared on Campus Reform.
have to die some white people TA university of georgia