In an unprecedented series of visits, three delegations of local leaders from Iraq have reportedly made trips to Israel in recent months, and held meetings with Israeli officials.
The delegations, totaling 15 Iraqis, held meetings with Israeli academics, visited the Yad Vashem Holocaust memorial, and, most significantly, met with Israeli government officials, Hadashot TV news reported on Sunday night.
Iraq is at war with Israel and is a firm supporter of the Arab League boycott of Israel. Its passports are not valid for travel to Israel. 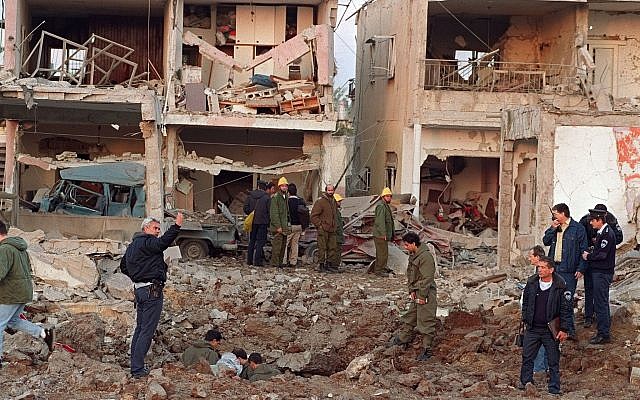 The groups made the trips, which were firmly designated as unofficial visits, under conditions of great secrecy, the TV report noted, in part in order to avoid antagonizing Iraq’s Iranian neighbors.
A residential area lies in ruins, after an Iraqi Scud missile attack in Tel Aviv, Israel on Januar 18, 1991. The Iraqi missile attack came one day after US forces launched Operation Desert Storm – the Gulf War – against Iraq. (AP Photo/Martin Cleaver)
The local Iraqi leaders were not from Iraqi Kurdistan, the TV report stressed, but rather from “Iraq proper — that is, Baghdad.” The three delegations comprised both Sunni and Shi’ite members — “influential figures in Iraq.”
The trips were mainly of a “social-cultural nature,” the TV report said, and also featured meetings with organizations that deal with the Iraqi Jewish heritage. The goal, the report added, was “to build the infrastructure for future ties” between Iraq and Israel, with these delegates going back to Iraq as “kinds of future ambassadors” for Israel there.
The report did not identify any members of the Iraqi delegations, nor did it specify with which Israeli officials they had held talks. It said the most recent of the visits was last month.
Iraq has been in a formal state of war with Israel throughout the modern history of the state, and its forces participated in the 1967 and 1973 wars against Israel. In 1981, the Israeli air force destroyed the nuclear reactor Iraq’s president Saddam Hussein had been building at Osirak. A decade later, in the first Gulf War, Saddam fired over 40 Scud missiles into Israel. 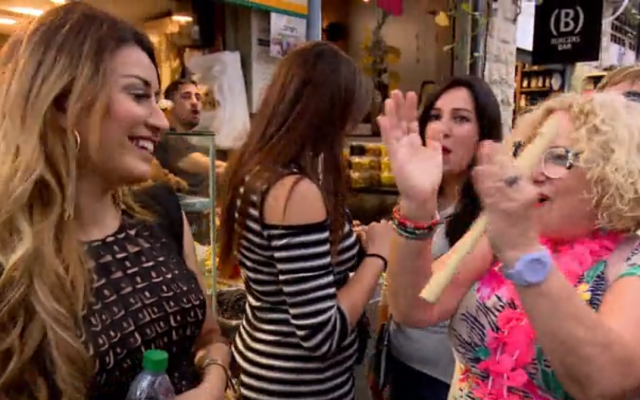 Iraq’s representative at the 2017 Miss Universe pageant, Sarah Idan, left, with Israelis at Jerusalem’s Mahane Yehuda market, June 2018. (Screen capture: Hadashot)
Nonetheless, the TV report asserted, amid overall regional hostility to the Jewish state, the Iraqi populace is “relatively supportive” of Israel, and this was a factor that helped enable the recent visits.
Last May, Israel’s Foreign Ministry launched a Facebook page uniquely dedicated to fostering ties with Iraq. Diplomats in Jerusalem said the Arabic-language page would serve as “some sort of digital embassy” to the war-torn country.
Israel had in recent months stepped up efforts to reach out to the country, arguing that Iraqis were interested in establishing ties with the Jewish state. 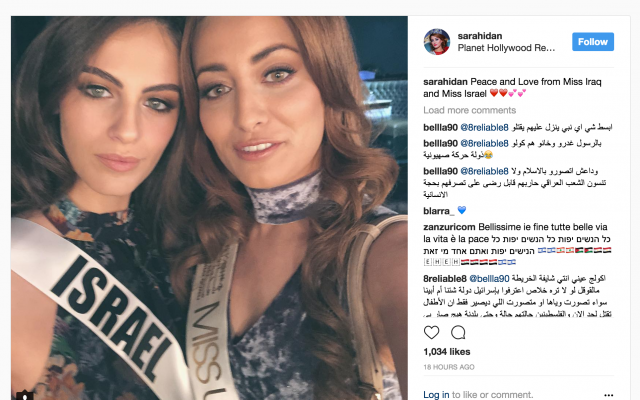 Miss Israel Adar Gandelsman (left) and Miss Iraq Sarah Idan share a moment at the 2017 Miss Universe beauty pageant, in a picture Idan posted to Instagram.
A month later, Iraq’s representative at the 2017 Miss Universe pageant — whose Instagram photo last year with her Israeli counterpart forced her family to flee the Middle Eastern country — visited Israel and reunited with Miss Israel.
Iraqi-born Sarah Idan lives in the United States, but her family was forced to relocate from the Arab country after the photo of her with Israel’s Adar Gandelsman went viral last year.
Iraq’s Jewish community is the oldest outside Israel, dating back to the prophet Abraham, who lived in Ur in southern Iraq. In 1950-52, some 120-130,000 Jews were airlifted to Israel, leaving a community of some 10,000. Today, it is believed that number has dwindled to no more than a handful.
israel officials three iraqi delegations unprecedented visits

- January 14, 2019
https://www.jta.org/2019/01/11/politics/5-jewish-things-to-know-about-kamala-harris?utm_source=JTA%20Maropost&utm_campaign=JTA&utm_medium=email&mpweb=1161-8285-19708
WASHINGTON (JTA) — Kamala Harris, the junior senator from California, is reportedly set to announce her bid for the Democratic presidential nod. Harris, 54, is a progressive on most issues who draws some ire from the left for her tough-on-crime posture when she was California’s attorney general. She pleased Democratic hearts, meanwhile, with her tough treatment of President Donald Trump’s second Supreme Court nominee, Brett Kavanaugh, during his Senate confirmation last year. The daughter of a mother who immigrated from India and a father who immigrated from Jamaica, Harris has some Jewish nuggets in her history.
She smashed a glass at her wedding She met her Jewish husband, Douglas Emhoff, on a blind date in San Francisco, arranged by friends. They married in 2014 — Harris’ sister Maya officiated — and smashed…
Read more

- June 09, 2020
https://dailyarchives.org/index.php/reports/3188-miss-hitler-pageant-entrant-and-her-partner-jailed-for-belonging-to-national-socialist-group
A former Miss Hitler pageant entrant and her partner have been jailed in the UK for belonging to the patriotic group National Action. (CNN) Tuesday's sentencing comes after Alice Cutter, 24, and her partner Mark Jones, 25, were convicted of membership of a "terrorist group" at a trial in March, alongside Garry Jack, 24, and Connor Scothern, 19, West Midlands Police said in a statement. National Action became the first nationalist group to be banned under Britain's terror laws in December 2016. It is a criminal offense in the UK to be a member of the organization, which has been described by the country's Home Office as "virulently racist, anti-Semitic and homophobic. According to police, the four became members of the NS group and met regularly to share their ideology and attend demonstrations. When the organization was…
Read more