Israel’s Iron Dome missile defense system intercepted a projectile launched from Syria after Damascus accused Jerusalem of carrying out a rare daytime attack on the south of the country on Sunday.

Pictures from Israel’s popular Mount Hermon ski resort, which was full of tourists enjoying the snow-filled hill, showed two trails from Iron Dome missiles while screams from children were heard in a video from the scene.
The interception came shortly after the Syrian regime accused Israel of carrying out airstrikes in the south of the country, triggering air defenses that intercepted several of them.“A military source said that our air defenses had successfully engaged an Israeli aerial attack targeting the southern region and prevented it from achieving any of its objectives,” read a report by the official Syrian news agency SANA.Al-Manar, Hezbollah’s media network, reported the attack near Damascus but gave no further details. Syrian regime supporters said that a total of nine Israeli missiles were intercepted by regime air defenses. Russia's Ministry of Defense, according to RIA news agency, said four Israeli jets fired seven missiles at the international airport, causing no injuries to Syrian nationals.The Syrian regime used the Buk and Pantisr systems to intercept the missiles, according to Sputnik, the Russian news agency. 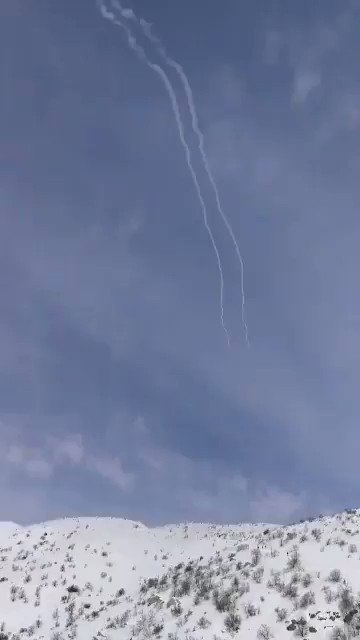 77 people are talking about this
The Syrian air defenses were alerted on Sunday afternoon as a Mahan Air flight from Tehran to Damascus was about to make its approach to Damascus. At 1:30 p.m. the flight turned around and headed away from the city. A Syrian L-76 cargo lifter from Tehran was also en route to Damascus on Sunday morning. These kinds of flights have been seen as suspicious over the last year amid allegations that Iran delivers weapons to Syria and Hezbollah using different airlines as cover.
There was no comment on the strikes by Israel, which rarely comments on alleged Israel Air Force operations on the northern front, but Israeli officials have repeatedly voiced concerns over Iran’s presence in Syria and the smuggling of sophisticated weaponry to Hezbollah in Lebanon from Tehran via Syria, stressing that both are red-lines for the Jewish State.With the presence of Iranian and Hezbollah forces, Israel’s northern front has become the IDF’s number one priority with former IDF Chief of Staff Lt.-Gen. (res.) Gadi Eisenkot admitting that Israel has carried out hundreds of strikes against Iranian targets in Syria.Israel “operated under a certain threshold until two-and-a-half years ago,” when he got “unanimous consent” from the government to change the rules of the game and dropped some 2,000 missiles against Iranian and Hezbollah targets in 2018 alone, he said.Prime Minister Benjamin Netanyahu said last week that Israel conducted airstrikes on Iranian weapons near Damascus airport on January 13 and Russia warned Israel against further strikes near the airport. Syria is therefore on high alert for any potential airstrikes.Nevertheless, daytime strikes by Israel against targets in the war-torn country are extremely rare with the IAF operating during the night.Earlier on Sunday SANA reported that a bomb exploded near a highway at the southern edge of Syria's capital Damascus. According to the report, an attacker was arrested and no one was injured.
daytime attack golan heights israel rare report strikes syria