Attorneys for Paul Manafort incorrectly redacted portions of their latest filings, leaving the secrets that had been redacted open to discovery by anyone with a computer mouse.
As noticed by Mike Scarcella of Law.com, the redacted portions of the new filings in Manafort’s case can be accessed by copying and pasting the portions that are blacked out. 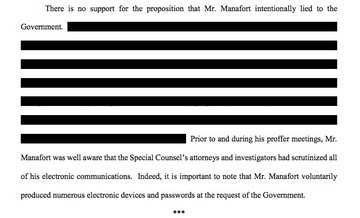 858 people are talking about this
Twitter Ads info and privacy
One of the redacted portions includes details about Manafort meeting with Russian intelligence operative Konstantin Kilimnik in Madrid.
Another concerns President Donald Trump.


“The first alleged misstatement identified in the Special Counsel’s submission (regarding a text exchange on May 26, 2018) related to a text message from a third-party asking permission to use Mr. Manafort’s name as an introduction in the event the third-party met the President,” the redacted portion reads. “This does not constitute outreach by Mr. Manafort to the President.”
bungle exposing lawyers new legal filing new secrets paul manafort redactions

Democrats and Republicans Agree: It's Time to Throw White Nationalists in Gulags

- March 11, 2020
https://dailyarchives.org/index.php/reports/3064-democrats-and-republicans-agree-it-s-time-to-throw-white-nationalists-in-gulags
Yesterday, the FBI made a big show of arresting multiple alleged members of a "white supremacist" group they have designated as a national security threat equivalent to ISIS. (National Justice) Federal prosecutors have charged black metal fan Cameron Denton, the Nazi Al-Baghdadi, with telling the police to send SWAT teams after a journalist and a politician as a childish prank. Four other cohorts in "AtomWaffen," mostly young Chan trolls, were also taken into custody in the multi-state terror raid over mailing the Israeli lobbyists at the Anti-Defamation League edgy fliers that say "Our Patience Has Its Limits." House Representative Karen Bass has complained loudly about the FBI's lack of transparency regarding arrest statistics related to "white supremacist terrorism." Her implication is that the career girls, left…
Read more