Renegade Editor’s Note: If Bashar Al-Assad is a real leader, why would he allow Bibi’s buddy Putin to “protect” his country militarily, when Bibi is ordering the illegal bombing of Syria and Russian defenses do nothing to stop it? Don’t give me that 4D chess BS.
(MEMO)
Israeli Prime Minister Benjamin Netanyahu told Russian President Vladimir Putin that Israel will continue working against “Iranian military repositioning in Syria”.
Netanyahu’s comments were made in a phone call between the two leaders, Anadolu Agency reported, with Netanyahu’s office also sending a written statement about the issue to its Russian counterpart.
The statement – a copy of which reached Anadolu – said that both leaders discussed the latest developments in Syria, while “Netanyahu agreed with [Putin] to continue cooperation between the armies of the two countries [in Syria]”.
“Israel insists on continuing its efforts aimed at undermining the Iranian military’s repositioning in Syria,” Netanyahu said, according to the statement.
Over the past few years, Israel has struck scores of Iranian targets in Syria, despite its official policy of non-involvement in the Syrian Civil War which has been ongoing since 2011.
This article originally appeared on Middle East Monitor. 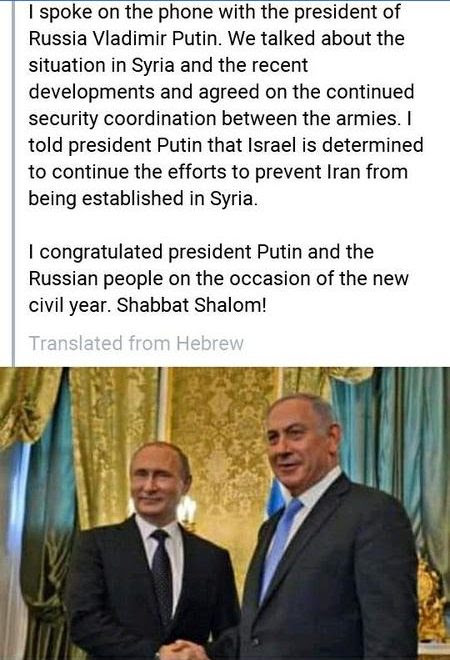