Venezuelan opposition leader Juan Guaido thanked Prime Minister Benjamin Netanyahu late Sunday for recognizing his government earlier that day, while linking his political struggle with the end of the Holocaust.
“Seventy-four years ago, the Auschwitz concentration camp was liberated, and today, just as our country is also fighting for its freedom, we thank the Prime Minister of Israel Benjamin Netanyahu for the recognition and the support,” Guaido tweeted.
A few hours earlier, Netanyahu had issued a statement declaring Israel’s recognition as Guaido as interim president of the Latin American country.
Sunday was International Holocaust Remembrance Day, which annually commemorates the liberation of Auschwitz on January 27, 1945, by Soviet troops.“Israel joins the United States, Canada, most of the countries of Latin America and countries in Europe in recognizing the new leadership in Venezuela,” his statement read.
Last week, the administration of US President Donald Trump reportedly asked Israel to publicly back Washington’s attempt to force the resignation of Venezuelan President Nicolas Maduro and throw support behind Guaido, who has declared himself interim president of the South American country.
Jerusalem was said to have been stalling on an announcement amid concerns the Maduro regime could respond with measures that could imperil members of the Venezuelan Jewish community. 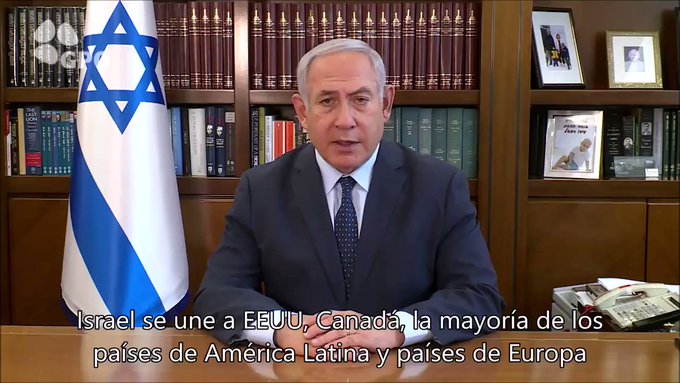 15.7K people are talking about this
Over the weekend, Israeli officials told Channel 13 news that State Department officials had made the request to diplomats at the embassy in Washington DC on Thursday, and that other US allies who have yet to declare their support for either side have also been asked to issue statements in support of Guaido.
Sunday’s announcement by Netanyahu earned immediate praise from US Ambassador to Israel David Friedman, who hailed the Jewish state for “standing with the people of Venezuela and the forces of freedom and democracy.”
Trump’s special envoy for international negotiations, Jason Greenblatt, applauded Jerusalem for its “courageous stand in solidarity with the Venezuelan people.”

Jason D. Greenblatt ✔@jdgreenblatt45
Israel takes a courageous stand in solidarity with the Venezuelan people!
Benjamin Netanyahu ✔@netanyahu
Israel joins the United States, Canada, most of the countries of Latin America and countries in Europe in recognizing the new leadership in Venezuela.
1,051
10:40 AM - Jan 27, 2019
Twitter Ads info and privacy

124 people are talking about this
While Venezuela once had one of the largest Jewish communities in the region, numbering some 25,000 in 1999, only about 6,000 Jews are believed to remain in the country, with many of the rest having fled to Israel, Canada, the US and elsewhere.
Maduro and his predecessor Hugo Chavez, who broke off ties with Israel in 2009, have both been strident critics of Israel, and some Jewish community leaders have expressed fears of the government stoking anti-Semitism.
The US has been pushing for the international community to back Maduro’s ouster. 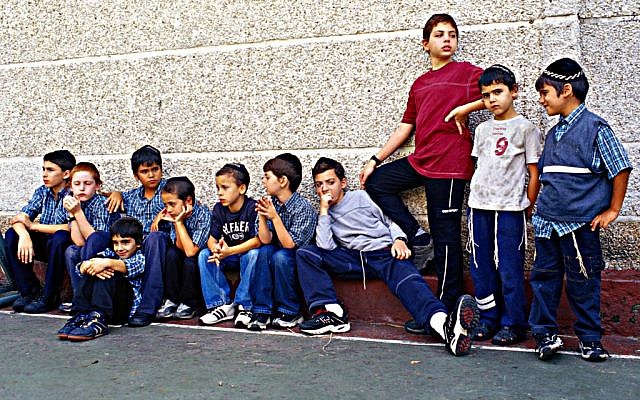 Jewish kids outside a Caracas school in 2005 (Photo credit: Serge Attal/Flash90)
At the United Nations on Saturday, US Secretary of State Mike Pompeo urged all nations to end Venezuela’s “nightmare” and support Guaido.
“Now is the time for every other national to pick a side,” Pompeo told the Security Council. “No more delays, no more games. Either you stand with the forces of freedom, or you’re in league with Maduro and his mayhem.”
France and Britain on Saturday joined Spain and Germany in turning up the pressure on Maduro, saying they would follow the US and others in recognizing Guaido unless Venezuela called new presidential elections within eight days.
On Thursday, high-ranking Palestine Liberation Organization official Ahmad Majdalani lashed out at the Trump administration for its support of Guaido, saying it was “an extension of the Trump administration’s policy of denying the will of peoples.” 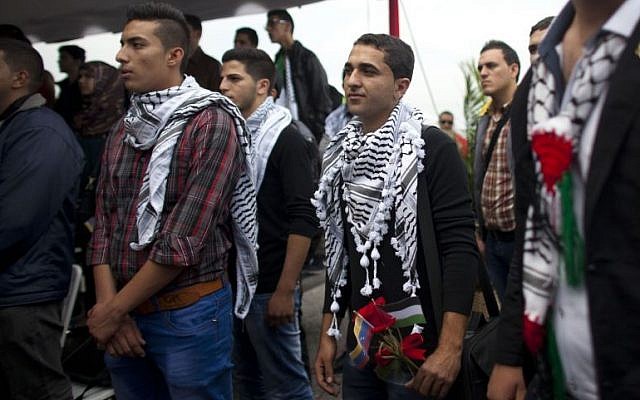 In this Nov. 6, 2014 file photo, Palestinian students attend a welcome ceremony at the Simon Bolivar airport in Maiquetia, Venezuela. The Palestinian students were greeted like celebrities upon arrival in Caracas. President Nicolas Maduro played up their symbolic importance during an address broadcast across the country. (AP Photo/Ariana Cubillos, File)
The US said last week it would use the “full weight” of US economic and diplomatic power to push for the restoration of Venezuela’s democracy and backed Guaido when he declared himself interim president last Wednesday in a defiant speech before masses of anti-government demonstrators who took to the streets to demand Maduro’s resignation.
The council meeting came a day after Guaido vowed to remain on the streets until his country has a transitional government, while Maduro dug in and accused his opponents of orchestrating a coup.
“They can cut a flower, but they will never keep spring from coming,” Guaido told supporters Friday, alluding to a phrase from the Chilean poet Pablo Neruda.
In a press conferences, Guaido urged his followers to stage another mass protest next week, while Maduro pushed his call for dialogue.
Each man appeared ready to defend his claim to the presidency no matter the cost, with Guaido telling supporters that if he is arrested they should “stay the course” and peacefully protest. 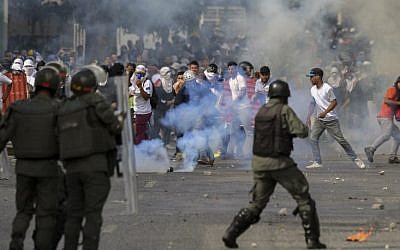 Opposition demonstrators clash with security forces during a protest against the government of President Nicolas Maduro on the anniversary of the 1958 uprising that overthrew the military dictatorship, in Caracas, Venezuela, on January 23, 2019. (Yuri Cortez/AFP)
But the standoff could set the scene for more violence and has plunged troubled Venezuela into a new chapter of political turmoil that rights groups say has already left more than two dozen dead as thousands take to the street demanding Maduro step down.
Guaido took a symbolic oath of office Wednesday proclaiming himself the nation’s constitutional leader on grounds that Maduro’s re-election last year was fraudulent — an allegation supported by the US, the European Union and many other nations.


Guaido’s move is the most direct challenge to Maduro’s rule despite years of protests at home and international efforts to isolate the regime amid a growing humanitarian crisis fueled by falling oil prices and government mismanagement.
Auschwitz invoking israel liberation president recognition venezuelan welcomes