- January 12, 2019
The far-right Alternative for Germany faces a new challenge from a breakaway faction after a once-prominent member confirmed Friday that he has quit to found a rival party.
Andre Poggenburg told German news agency dpa that he believes his new movement stands a chance of entering state parliament in regional elections later this year.
The new party, named Awakening of German Patriots, features a blue cornflower in its logo.

View image on TwitterIn neighboring Austria, the flower has historically been associated with the anti-Semitic Schoenerer Movement and was used as a secret symbol by Nazi sympathizers until the Alpine nation was annexed by Adolf Hitler’s Germany in 1938. The far-right Austrian Freedom Party has occasionally revived the symbol, while insisting that the flower is free of Nazi associations.

's other Tweets
Twitter Ads info and privacy
Poggenburg led Alternative for Germany (AfD) to its strongest state election performance yet when the party won almost a quarter of the vote in Saxony-Anhalt in 2016. 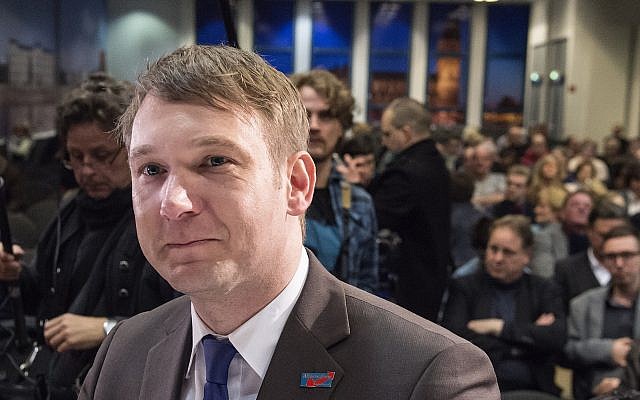 In this Friday, March 11, 2016, file photo, Andre Poggenburg, former regional party leader of Alternative fuer Deutschland (AfD) in the German state Saxony-Anhalt, arrives prior an election campaign rally of his party in Magdeburg, Germany (AP Photo/Jens Meyer)
The 43-year-old resigned as regional party leader last year after labeling Turks as “camel drivers” and immigrants with dual nationality a “homeless mob we no longer want to have.”
In an interview with daily Die Welt, Poggenburg said AfD had made a noticeable “shift to the left” lately for fear of being placed under observation by Germany’s domestic intelligence agency.
Awakening of German Patriots is the fourth breakaway movement to emerge from Alternative for Germany since its founding in 2013.
In 2015, AfD founder Bernd Lucke quit after losing an internal power struggle. His Liberal-Conservative Reformers have one seat in the European Parliament — held by Lucke.
AfD co-leader Frauke Petry quit the party just after Germany’s national election in September 2017. She now leads the Blue Party, with two seats in the national parliament.