Cannabis Oil Was Used To Treat Epilepsy 176 Years Ago

Cannabinoids have been found to have antioxidant properties, unrelated to NMDA receptor antagonism. This new found property makes cannabinoids useful in the treatment and prophylaxis of a wide variety of oxidation associated diseases such as ischemic, age-related, inflammatory and autoimmune diseases. The cannabinoids are found to have particular application as neuroprotectants, for example in limiting neurological damage following ischemic issues such as strokes and trauma, or in the treatment of neurodegenerative diseases such as Alzheimer’s disease, Parkinson’s disease and HIV dementia. Non-psychoactive cannabinoids such as cannabidiol are particularly advantageous to use because they avoid toxicity that is encountered with psychoactive cannabinoids at high doses useful in the method of the present invention. A particular disclosed class of cannabinoids useful as neuroprotective antioxidants is formula (I) wherein the R group is independently selected from the group consisting of H, CH3, and COCH3. (Source)

The statement above comes from a patent owned by the United States government, which was assigned decades ago. Since then, countless amounts of studies have shown how the active constituents within cannabis, like cannabidiol for example,  completely obliterate cancer cells in the lab in vitro. As illustrated above, it has a wide variety of health applications, which begs the question when it comes to various diseases, why have we not seen any clinical trials? There are so many published studies warranting clinical trials when it comes to using cannabis to treat cancer, among several other diseases.
When the development of a drug shows even a quarter of the potential that cannabis has over the years, it seems that funding for clinical trials becomes instant. But when it comes to cannabis, which has obviously shown huge potential, we’ve seen nothing. I am more so referring to clinical trials with regards to cancer. Just imagine if we funded studies using natural remedies with the same amount of money we invest into pharmaceuticals. Would certain cancers be cured? Again, we don’t know, because the resources haven’t been adequately dished out, and if it did turn out that cannabis could obliterate multiple cancers in vivo (full living biological organisms), it would be against corporate interests.
However, this will likely change now that medical marijuana is being legalized across the world, the most recent example being Canada. This has brought up multiple concerns from citizens, as Big Pharma is now taking over the medical cannabis industry. How it’s grown, what pesticides are being put on it, and whether or not it’s genetically modified is still unknown. The truth is, pharmaceutical marijuana will not at all compare to marijuana that’s grown naturally in nature. If one were to study the medicinal properties comparing the two, I bet there would be a significant difference.
Big pharma is taking over the medical marijuana industry. Legalization in Canada and various US states was largely done in order to profit these big corporations who don’t really seem to care about our health at all. The main reason why cannabis has been illegal for so long is that powerful corporate interests have had a huge hand in keeping cannabis off the market. Cannabis can eliminate the need for many prescription drugs, for example, and these alone kill approximately 100,000 people a year, and that’s in the United States alone.

Children and people with epilepsy have had a very hard time accessing medical marijuana to treat their condition. Again, this is largely because the use of it threatens corporate interests. This became even more evident a couple years ago when 12 year old Alexis Bortell sued Attorney General Jeff Sessions and The Drug Enforcement Administration (DEA). She needed access to clean, pure, natural cannabis for the treatment of her illnesses and medical conditions. The family had no choice but to relocate from Texas to Colorado and uproot their entire lives just to treat her severe epilepsy.
The crazy thing about cannabis and epilepsy is the fact that it works, and that’s something that has been known for a number of years. Sure, it might take a lot of time to find the right strand, make it into oil, and get the dosage amounts exactly right, but that’s only because parents and doctors who are actively engaged in using this as medicine don’t have the resources to figure this out in an efficient way.
Cannabis and its ability to treat epilepsy has been known for a long time, probably much longer than we are aware of. Prior to Rockefeller creating medical education, it was probably used a lot. Rockefeller and other ‘philanthropists’ played a large role in shutting down all medical schools before they began funding and building their own medical education and treatment methods. During this process, an enormous amount of knowledge was lost, and the treatment methods that were most profitable became mainstream.
The first detailed modern description of cannabis as an anti-seizure medication was published in 1843 by W.B. O’Shaughnessy, a physician in the Bengal Army and Late Professor of Chemistry and Materia Medica at the Medical College of Calcutta. A perfect example of what I just referred to above with regards to medical education.

After testing the behavioural effects of various preparations of Cannabis indica in healthy fish, dogs, swines, vultures, crows, horses, deers, monkeys, goats, sheep, cows, and military assistants, he investigated the potential value of extracts of the plant in patients with different disorders, and reported remarkable anti-seizure effects in a 40-days-old baby girl with recurrent convulsive seizures. These observations were taken up by other physicians, including Sir William Gowers, who described the effectiveness of Cannabis Indica against seizures resistant to bromides. (source)

In the twentieth century the use of cannabis declined somewhat because cultivation of the plant was made illegal in many countries.
Below is a graph of  the number of articles retrieved in PubMed by using the search terms ‘cannabis and epilepsy’, grouped by year of publication. 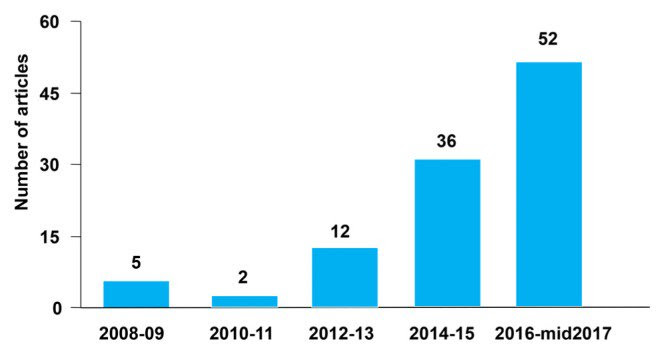 One of Many Real World Examples

Alex Repetski, father of three year old daughter, Gwenevere, has spent a long time reading through studies and medical journals and researching CBD and its healing properties to help her with the tonic, myoclonic, and clinical seizures she was having — sometimes up to 50 a day. She was diagnosed with epilepsy and, as her EEGs revealed, was experiencing constant subclinical seizure activity throughout the day. It may not have looked like she was having a seizure from the outside, but at the brain level there were neurons firing constantly, and such activity can produce significant brain damage.
Gwenevere had a team of doctors that were trying an array of treatment methods to reduce the number of seizures she was having each day. At one point she was on 9 different medications. They kept hoping each subsequent medication would work, but nothing did. That’s when Alex decided to look into cannabis oil. “At that point, we really didn’t have anything to lose,” he said, as he recalled the struggle of trying to help his daughter achieve a better quality of life.
After acquiring the cannabis and reducing it down to its oil form, Alex proceeded with many rounds of trial and error, trying to find just the right dosage for Gwenevere. After five days, they noticed no seizures. Then another week went by, and then a month, and then two months of no seizures. Two Januaries ago, she went in for her 17th EEG after being on cannabis oil for 5 weeks.
This EEG was strikingly different from her previous ones. It seemed the cannabis oil had helped straighten out her brainwaves, working at the subclinical level. This was a huge moment for the Repetski family.

Corporations have amassed so much power that plants and natural substances with unbelievable healing properties are being made illegal. Furthermore, many doctors are brainwashed to believe that this is still a controversial topic. And with legalization comes the takeover of this medicine by big pharmaceutical companies. If you want to know about the healing properties of cannabis, you don’t have to look far. It’s also important to acknowledge that theses benefits typically do not include smoking the plant, since that completely changes its chemical composition.
It’s very hard to find pure, healthy, and properly grown cannabis today. It requires a lot of research and a lot of work to find, which is in large part due to government regulations and big pharma. Anything that threatens corporate interests, no matter how helpful it can be for humanity, is often hidden from us or made illegal.
This article originally appeared on Collective Evolution.
176 years ago cannabis oil epilepsy used to treat