Israel is preparing for an historic visit by Mali’s Prime Minister Soumeylou Boubeye Maiga, officials said on Monday, a day after Prime Minister Benjamin Netanyahu cemented the reestablishment of diplomatic relations with Chad during the first visit of an Israeli premier to the Muslim-majority country.
Maiga will visit Israel “in the coming weeks,” and Netanyahu hopes the trip will take place before the April 9 elections, according to reports by Channel 13 and the Kan public broadcaster.
The Foreign Ministry declined to comment.
Maiga’s visit could mark a similar process to that with Chad, which re-established ties that with Israel on Sunday during Netanyahu’s single-day visit to the country, weeks after Chad’s President Idriss Déby had visited Israel. Chad severed ties with Israel in 1972, due to pressure from Libyan strongman Muammar Gaddafi.The West African country, whose population is also majority Muslim, severed ties with Israel in 1973, following the Yom Kippur War. Last year, Netanyahu met with the Malian president on the sidelines of a summit in Liberia. At the end of the meeting, Netanyahu’s office released a statement saying the countries agreed to “warm” their relations.
Appearing alongside Déby at the N’Djamena presidential palace, Netanyahu called the move “a breakthrough into the heart of the Muslim world.” 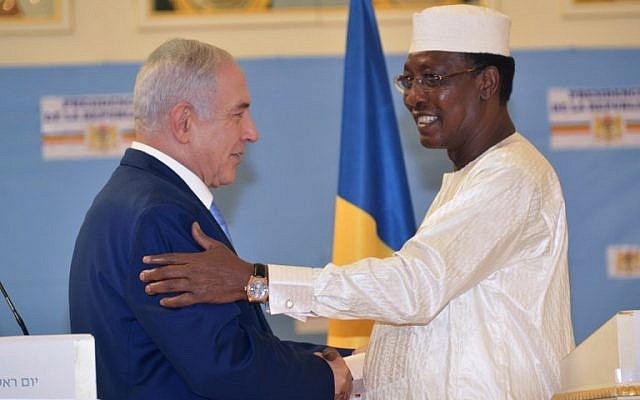 Chadian President Idriss Deby Itno (R) shakes hands with Prime Minister Benjamin Netanyahu during a meeting at the presidential palace in N’Djamena on January 20, 2019. (BRAHIM ADJI / AFP)
Netanyahu portrayed the visit as the result of his hard-won diplomatic efforts, referring to his three visits to Africa over the last couple years and his surprise trip to Oman in October. The visit to Oman, a major diplomatic victory for Netanyahu, was an apparent sign of Israeli progress in improving ties with Gulf countries.
On Sunday, in Chad, he also indicated that additional Muslim countries in Africa would soon warm up to Israel. “There will be more major news. There will be more countries,” he said, without elaborating.
In an unprecedented move, Sudan on Sunday allowed Netanyahu’s plane to cross through the air space it controls on his way back to Israel from Chad. The prime minister’s plane jetted over South Sudan, whose skies are under the control of the civil aviation authorities in Khartoum.
Israel’s diplomatic push in Africa is aimed mainly at widening Israel’s circle of relations, boosting trade, and improving its international status, and is also driven in part by a desire to ease air travel to Latin America. Flying in the airspace of traditionally hostile African countries would allow airlines to offer faster, more direct flights between Israel and the continent.
Flying directly from Israel to Brazil over Africa would shave some four hours off the average journey, which currently takes at least 17 hours, and requires a stopover in either Europe or North America. 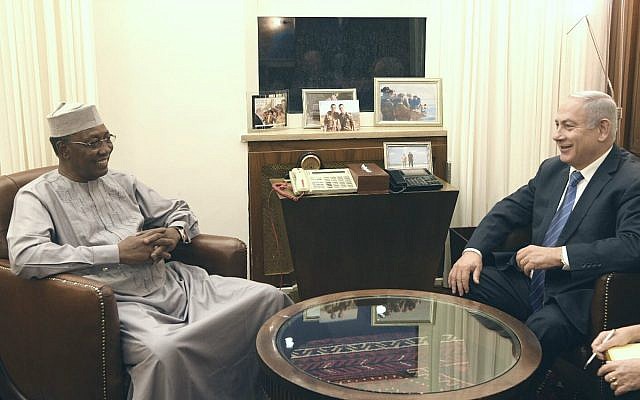 Prime Minister Benjamin Netanyahu (R) meets with President Idriss Deby of Chad at the Prime Minister’s Office in Jerusalem, November 25, 2018. (GPO)
In stark contrast to the talk of warming ties with Mali, hours after Netanyahu’s joint appearance with Déby, al-Qaeda gunmen, angered by Chad resuming ties with Israel, killed 10 Chadian peacekeepers and injured at least 25 others in an attack on a UN camp in northern Mali. Al-Qaeda in the Islamic Maghreb (AQIM) claimed responsibility for the attack, saying it was “in reaction” to the visit to Netanyahu, according to the Mauritanian Al-Akhbar news agency, which regularly receives statements from this jihadist group.
Netanyahu has traveled three times to Africa in the last two years, visiting Kenya, Rwanda, Ethiopia, Uganda, and Liberia. He regularly vows to expand ties with all countries on the continent, including those that do not have diplomatic relations with Israel.
In July 2016, the Republic of Guinea, a small, overwhelmingly Muslim country in West Africa, renewed diplomatic relations with Israel, after it had cut ties with the Jewish state in 1967.
chad coming weeks israel mali prime minister restored set to host ties