The International Paralympic Committee (IPC) announced Sunday that it was stripping Malaysia of the right to host a Paralympic swimming championship due to its ban on Israeli athletes, saying it was “disappointed” with Kuala Lumpur’s position.
“Politics and sport are never a good mix,” said IPC President Andrew Parsons in a statement after the body’s governing board made the decision in London. “We are disappointed that Israeli athletes would not have been allowed to compete in Malaysia.”
Earlier this month, Israel’s Foreign Ministry denounced Malaysia for banning the Israelis from the summer’s World Para Swimming Championships on the island of Borneo, calling the move “shameful” and saying that if the athletes aren’t allowed in, a new host should be found. 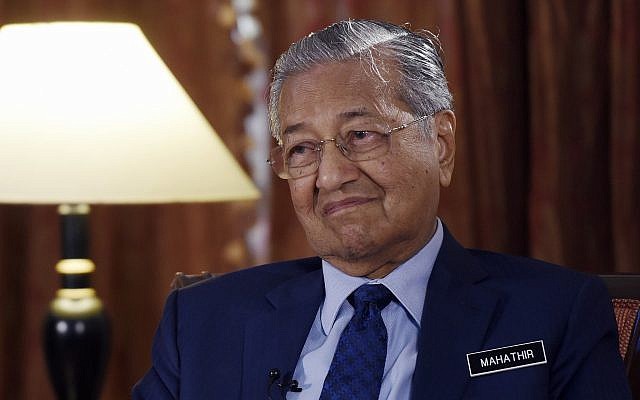 Malaysia’s Prime Minister Mahathir Mohamad said that the Israeli swimmers would not be let into the country, and his foreign minister, Saifuddin Abdullah, said the predominantly Muslim country “will not host any more events involving Israel or its representatives.”
Malaysia’s Prime Minister Mahathir Mohamad in an interview with The Associated Press in Putrajaya, Malaysia, August 13, 2018. (AP Photo/Yam G-Jun)
The IPC said in its Sunday statement that in 2017, when it signed the contract with Malaysia, the government had provided assurances that all athletes would be able to participate without discrimination. But a regime change that saw Mahathir rise again to power meant those assurances were withdrawn.
“All World Championships must be open to all eligible athletes and nations to compete safely and free from discrimination,” said Parsons. “When a host country excludes athletes from a particular nation, for political reasons, then we have absolutely no alternative but to look for a new Championships host.
“The Paralympic Movement has, and always will be, motivated by a desire to drive inclusion, not exclusion. Regardless of the countries involved in this matter, the IPC would take the same decision again if it was to face a similar situation involving different countries,” he added.
Foreign Ministry spokesperson Emmanuel Nahshon praised the decision, tweeting that “this is a victory of values over hatred and bigotry, a strong statement in favor of freedom and equality. Thank you @Paralympics for your brave decision!!!”
Malaysia’s Youth and Sports Minister Syed Saddiq Syed Abdul Rahman reacted by saying that if hosting an international sports event was more important than the country’s support for the Palestinian cause, “(it) means Malaysia has truly loss its moral compass.”
“Malaysia stands firm with our decision on the ground of humanity and compassion for the Palestinian plight. We will not compromise,” the minister added.
A week ago, Mahathir argued that it was his country’s “right” to deny entry to Israeli nationals and that it was “unfair to label him as anti-Semitic” for his previous anti-Semitic remarks. Speaking before Oxford University’s prestigious debating chamber, the Oxford Union, Mohamad said that “a country has the right to keep its borders closed to certain people, that’s why borders are there.”
Mahathir, now 93 and in his second stint as prime minister, has in the past attracted criticism for his verbal attacks on Jews, including calling them “hook-nosed.” 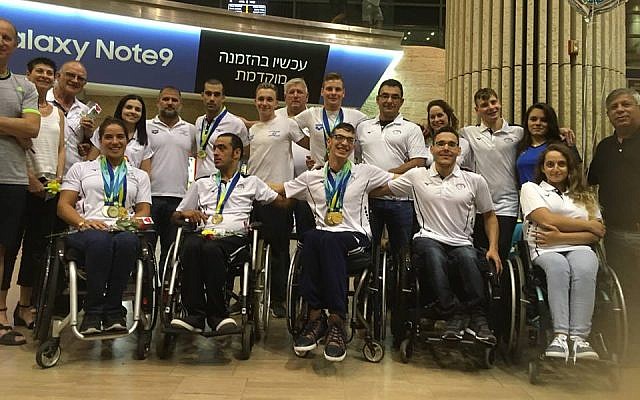 The Israeli national Paralympic team on its return from the 2018 European championships. (Israel Paralympic Association photo, Facebook)
The previous government allowed a high-level Israeli delegation to attend a UN conference in Kuala Lumpur in 2018, sparking public anger.
The IPC is now looking for a new host for the championship, and is seeking to hold it on the same dates as originally scheduled — July 29-August 4 — or as close as possible to those dates so as not to disrupt the athletes’ training schedules. The deadline for expressions of interest is February 11.
“The IPC Athletes’ Council has received a great deal of correspondence from athletes around the world on this situation,” said Chelsey Gotell, chairperson of the IPC Athletes’ Council.
“Not only does this decision stress the importance of keeping sport and politics separate, but it also reinforces the IPC’s commitment to our fundamental moral and ethical principles that encompass inclusivity of all eligible Para athletes and nations to compete at IPC sanctioned events.”
Israeli athletes are regularly banned from competing at international sporting events in Arab and Muslim countries, or forced to compete without displaying their national symbols. A number of incidents have led to reprimands from international governing bodies and promises to reform.
Malaysia has stopped Israeli athletes from competing in a sporting event before. Two Israeli windsurfers had to pull out of a competition on the island of Langkawi after they were refused visas in 2015.
Malaysia also refused to host a conference for world soccer’s governing body FIFA in 2017 as an Israeli delegation was due to attend.
banning blocked hosting israelis malaysia paralympics swimming meet