Renegade Editor’s Note: I know Zero Hedge is not to be trusted, but I don’t have the time or inclination to re-write this piece. The point is that Trump is taking back his Christmas present to the Americans who want to see their boys and girls come home. Was it really Lindsey who convinced the president or was it Trump’s Israeli handlers?

(ZHE) — President Trump is “reconsidering” his strategy to pull US forces out of Syria following an “eye-opening trip to Iraq” the day after Christmas, Bloomberg reports.
Sen. Lindsey Graham (R-SC) who sits on the Senate Armed Forces Committee – a harsh critic of Trump’s announced pullout, said earlier Sunday that he would try to change Trump’s mind during a private lunch since the Islamic state isn’t quite defeated in the region as the President had previously stated.
“I feel better about Syria than I felt before I had lunch,” said Graham after he left the White House. “I think the president is taking this really seriously, and the trip to Iraq was well timed.” Trump has apparently devised a strategy with his generals in the field that “makes sense” according to the Senator. 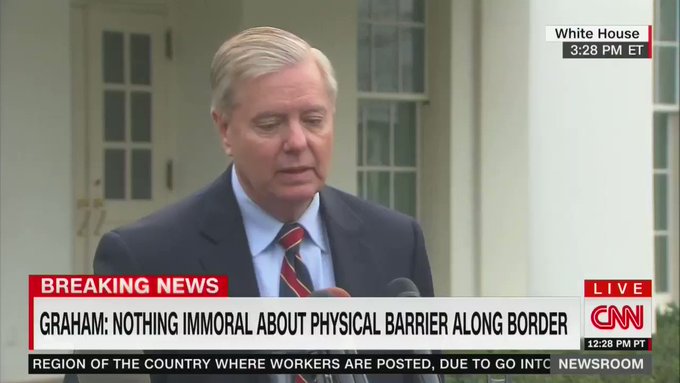 Lindsey Graham said it was a successful lunch and the discussion he had with Trump made him "feel much better" about the decision to pull troops out of Syria >> https://washex.am/2QUD3lf

On Sunday morning, Graham told CNN‘s “State of the Union” that Trump had spoken with General Joseph Dunford, chairman of the Joint Chiefs of Staff.
“I got a call from General Dunford,” said Graham. “The president is reconsidering how we do this.”

The White House didn’t immediately respond to a request for comment on whether Trump is considering reversing the decision, announced by tweet earlier this month, to pull U.S. troops from Syria. That move, which came against the advice of the president’s top national security advisers, triggered the resignation of Defense Secretary Jim Mattis.
Trump has already has backed away from the notion of an immediate withdrawal, saying a week ago that the pullout of U.S. troops from the area would be “slow & highly coordinated.” –Bloomberg

Sort of like how Trump’s “immediate” and full declassification of the Justice Department’s Russiagate documents turned into a “slow & highly coordinated” handoff to the DOJ Inspector General.
When asked whether President Trump would be to blame if ISIS became more powerful after US troops leave Syria, Graham responded that the blame belongs to former President Barack Obama due to his decision to withdraw from Iraq in 2011.
“Everything we’re dealing with today falls on Obama’s watch. He’s the one who withdrew from Iraq,” said Graham.
“But he did it because there was a Status of Forces Agreement in Iraq, right?” shot back CNN host Dana Bash.
“Listen. No, that’s a bunch of bullshit. Pardon my French. That’s a complete lie. That’s a complete, absolute lie,” said Graham, to which Bash asked “That didn’t happen?”
“ISIS came about as a result of our withdrawal from Iraq. The caliphate was established in Syria because Obama sat on the sidelines and watched the place be dismembered,” said Graham, adding of Trump: “He was dealt a bad hand by Obama and he needs to play it better than he’s playing it. Keeping the troops in Iraq is great.”