Iranian infrastructure and strategic networks have come under attack in the last few days by a computer virus similar to Stuxnet but “more violent, more advanced and more sophisticated,” and Israeli officials are refusing to discuss what role, if any, they may have had in the operation, an Israeli TV report said Wednesday.
The report came hours after Israel said its Mossad intelligence agency had thwarted an Iranian murder plot in Denmark, and two days after Iran acknowledged that President Hassan Rouhani’s mobile phone had been bugged. It also follows a string of Israeli intelligence coups against Iran, including the extraction from Tehran in January by the Mossad of the contents of a vast archive documenting Iran’s nuclear weapons program, and the detailing by Prime Minister Benjamin Netanyahu at the UN in September of other alleged Iranian nuclear and missile assets inside Iran, in Syria and in Lebanon.
“Remember Stuxnet, the virus that penetrated the computers of the Iranian nuclear industry?” the report on Israel’s Hadashot news asked. Iran “has admitted in the past few days that it is again facing a similar attack, from a more violent, more advanced and more sophisticated virus than before, that has hit infrastructure and strategic networks.”
On Sunday, Gholamreza Jalali, the head of Iran’s civil defense agency, said Tehran had neutralized a new version of Stuxnet, Reuters reported.“Recently we discovered a new generation of Stuxnet which consisted of several parts … and was trying to enter our systems,” Jalali said.The Iranians, the TV report went on, are “not admitting, of course, how much damage has been caused.”
The Stuxnet virus was uncovered some eight years ago, and was widely reported to have been developed together by US and Israeli intelligence. It penetrated Iran’s rogue nuclear program, taking control and sabotaging parts of its enrichment processes by speeding up its centrifuges. 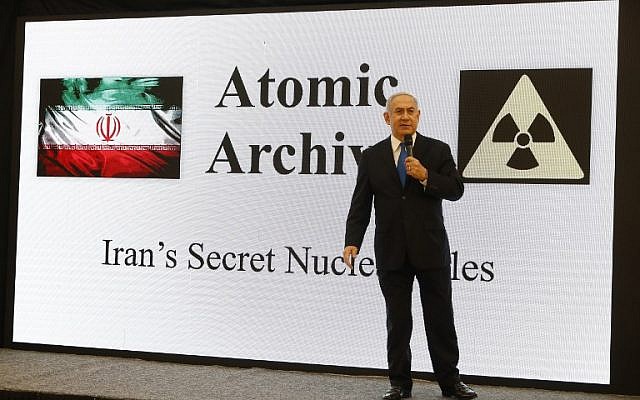 Prime Minister Benjamin Netanyahu delivers a speech on an archive brought out of Iran by the Mossad that documents Iran’s nuclear program, at the Defense Ministry in Tel Aviv on April 30, 2018. (AFP/Jack Guez)
Netanyahu is adamant that the Iranian regime remains determined to attain a nuclear weapons arsenal, and has bitterly opposed the P5+1 powers’ 2015 deal with Iran. US President Donald Trump, with whom Netanyahu is closely allied, withdrew from the accord in May. 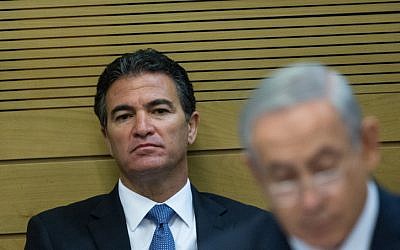 Yossi Cohen, the head of the Mossad, is seen in a committee meeting at the Israeli parliament on December 8, 2015. (Yonatan Sindel/Flash90)
Referring to Stuxnet, Wednesday’s TV report noted that “in the past, the US and Israel have been alleged to have worked together on operations.” Trying to establish whether Israel had any role in the latest cyberattack, the TV report said: “We’ve tried to clarify here. They’re refusing to comment.”
The TV report noted that “behind the scenes lately, the Mossad,” under its director Yossi Cohen, has been “fighting a real shadow war.”
Without attributing responsibility to the Mossad, the report mentioned the tapping of Rouhani’s phone, noting that the Iranians “had to switch it for an encrypted model because they understand that someone has been listening to him for days and weeks.” 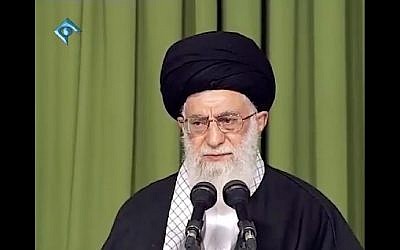 Ayatollah Ali Khamenei. (Screen capture: Khamenei.ir)
On Sunday, Iran’s Supreme Leader Ayatollah Ali Khamenei urged intensified efforts to counter enemy “infiltration,” Reuters said.
In a speech to officials in charge of cyber defense, Khamenei said: “In the face of the enemy’s complex practices, our civil defense should… confront infiltration through scientific, accurate, and up-to-date… action,” the report said, quoting Iranian state TV.
Read: Mutually assured cyber destruction?
Earlier Wednesday, Israeli officials said the Mossad provided its Danish counterpart with information concerning an alleged plot by Tehran to assassinate three Iranian opposition figures living in the Scandinavian country. According to the officials, the Mossad gave Denmark information about a plot to kill three Iranians suspected of belonging to the anti-regime Arab Struggle Movement for the Liberation of Ahvaz.
The intelligence reportedly provided by the Mossad prompted the arrest of a Norwegian national of Iranian origin earlier this month. Denmark on Tuesday recalled its ambassador to Iran over the incident.
“What Iran hides, Israel will find,” Netanyahu declared in his September UN speech.
computer virus iran israel silent stuxnet TV report violent