Dave Chappelle Urges White Idiots Americans to Take Responsibility For Trump: He Get 'Too Much Credit'

This week, comedian Dave Chappelle sat for an interview on CNN at the Royal Albert Hall in London alongside Jon Stewart to discuss his thoughts on the Trump presidency, nearly two years since his election.
One of his key points: we should not blame Trump, or Russia, or anything else for the deep-seated racism that — at the end of the day — drove many people to vote the way they did.
"Even when they say that Russia influenced the election, it's kind of like, is Russia making us racist? Is that who's doing it?" said Chappelle. "Oh OK, oh my God, thank goodness — I thought it was us."
"If they killed the country that way then we're the murder weapon," Chappelle added. Trump, he said, gets "too much credit" for the hate in American politics. "He's not making the wave, he's surfing it."
Watch below: 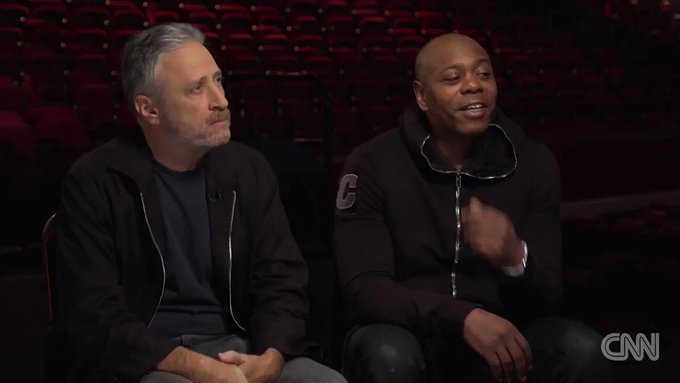 Twitter Ads info and privacy
Chappelle's words might be a bitter pill for many Americans to swallow, but he is correct. While the Russian attacks on the U.S. election were a horrific and large-scale crime, the operation would not have been nearly so effective had their not been a racial rift for them to exploit. Russian propaganda memes that bombarded U.S. social media were full of heinous, racially-charged rhetoric about immigrants, crime, and police brutality because they knew Americans were divided over those issues already.
And the seeds of this division long predate Trump. The fact that the right responded to the historic election of President Barack Obama with vitriolic racism about his birthplace and religion, and was in turn able to use that racism to propel themselves to victory in 2010 and 2014, was a sobering indictment of national wounds that go back to the enslavement of Black Africans and have never healed.
With the midterm elections just one week away, it remains to be seen whether Trump's words will energize his supporters to the polls in all the right places, the way they managed to in 2016.And today, Trump would have no use for his racially coded appeals to the voting public, from panic about migrant caravans to his promise to strip the 14th Amendment's citizenship protections, if that rhetoric did not work on a notable segment of the population.
dave chapelle donald trump take responsibility too much credit urges