Girls with anorexia make me think of flowers that are wilting and dying because they’re planted in denatured soil. The whole eating disorder phenomenon, in my view, has been part of girls’ and women’s theatre in the war on white people. The millions of ghosted souls locked in food addictions can be seen as victims of an orchestrated transition over these last decades, from what was a high-trust, relatively flourishing European society, to a fully judaic (denatured) one.
It’s generally conceded that eating disorders in what have been traditionally white countries are a (((media))) generated event, starting with the ‘80s diet craze, skeletal models and photoshopping. However, are we also looking at yet another multi-faceted semitic mind virus?
Like with every social crisis, jewish narrative fixers have been johnny-on-the-spot, to pin blame on mean mothers, the patriarchy, anything but the malevolently orchestrated death spiral of European culture, and its creeping replacement with a judaic one.
Even though it’s joked about in movies and TV shows as that chick disease, eating disorders are the mental illness with the highest mortality rate, with one death every hour in America. With anorexia, one in five dies of suicide, which gives away that it’s got something to do with a loss of will to live in this increasingly toxic, degenerate and undigestible culture.
White women are the primary victims, of what I’ve come to suspect has been an intentionally set off diet culture mega-trend delivered with an MK Ultra-style double-bind. It involves the simultaneous rise of an exploitative diet and beauty market, toxic and addictive food, and the psychic driving of social engineering toward the aggressive deconstruction of any lingering remnants of Aryan identity.
Here are five signs we’re looking at what Zio-communist author Kim Chernin calls interestingly “obsessive entrapment,” and one that has so many women, as she puts it, “genociding themselves.”

We are targeted with subliminal advertisements, combined with scientifically-engineered sensory experiences to lure us into consuming, being consumers and even being consumed ourselves. This is paired with a wearying solar year of media thinspiration from new year’s resolutions to preparing for bikini season.
This seems to me to be one of those crazy-making double binds, which is a payload of conflicting messages that makes it hard to respond and sets the trap. MK Ultra-linked mind control figure Gregory Bateson coined the term and it’s interesting to look at the conditions of the Trap, so we can see the way out.
From Bateson’s Wiki page, we learn that the victim of a double bind is bombarded with contradictory demands or emotional messages that are received in different ways (images, gestures, actions). There seems no way that metacommunication is possible — in other words, you can’t see outside the options presented to you. There’s no escape from the messages, as with TVs everywhere these days. The other factor is that it’s implied that the victim will lose something by not going along with it, like not be popular or loved.
We can break free of this double-bind by being able to step outside of this intentionally schizophrenic scene. Many eating disorder specialists talk about the importance of being culturally aware, but they seem clueless about the true scale of social engineering.

The Patriarchy Did This to You

White women’s eternal frenemy have not let this engineered crisis go to waste, and the top authors on this topic are chosenites, with titles like Susie Orbach’s Fat is a Feminist Issue. In the most ethnocentric self-help book I’ve ever read, The Hungry Self, jewess Kim Chernin melds Aryan and semitic timelines, when she repeatedly writes of women being denigrated for thousands and thousands of years.
Fellow (((white))) woman Chernin picks up where Betty Friedan left off, projecting all that weaponized discontent that women supposedly have with their biological instincts, motherhood and home life onto all women. Sorry, I can’t relate to most of these stories – my mother was not a zaftig immigrant from a Russian shtetl and organizer for the Communist Party who I couldn’t overthrow in the ladies version of the Freudian Oedipal drama.
It’s freeing to realize that semitic christianity has been a dark age divergence from the true Aryan path reaching back millennia. And that our history is filled with stories of female heroines and wise women living in sync with nature and with men.

An Australian eating disorder specialist and former anorectic writes of her mum calling her a Belsen horror. Another author feels she has to pay tribute to Viktor Frankl’s Auschwitz memoir, as a way of making sense of suffering. 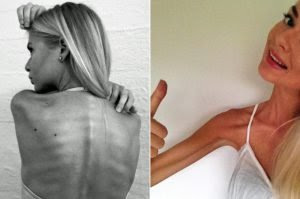 Likely not intentional, these specialists are steeped in the trauma-based programming of the Holohoax, and this has added to the guilt a lot of anorectics already feel. Chernin is quick to jewsplain that of course, the lives of these privileged women and the suffering of the chosenites in the camps cannot be compared.
To remind the reader of the jews’ unique suffering, she writes in The Hungry Self, “Although anorectic women refuse to acknowledge the extent of the physical depletion they have taken upon themselves, it is surely of interest that they have afflicted themselves with the most tragic and dramatic imagery for human devastation our culture knows.”
This narrative has somehow been slipped subtly and not-so-subtly into a lot of literature to do with all kinds of suffering. It’s as if to say, you don’t know real suffering goyim, unless you’ve been shoahed like we have.

Degeneracy and Sexualization of the Young

The documentary Emma Wants to Live tells the story of a young Dutch girl (see image at top) who filmed her own slow death from anorexia at 18. I noted that Emma’s favorite show was Gossip Girl, a kind of Sex and the City for teens, where they do drugs and have one-nighters in high school. I can’t bring myself to watch a show like this, but I see that one character suffered from bulimia, shown in an episode with the cutesy title, Blair Waldorf Must Pie.
A University of Washington student ‘kiharank,’ closer to Emma’s age writes of Gossip Girl, “The female protagonists are constantly put in the same situation over and over again. Unable to handle their well of emotions, they rely on food as a crutch and resort to catfights and public humiliation when all else fails.”
And to think, I used to watch half-pint’s antics on Little House on the Prairie after school.
My take is that the intensity of youth has nowhere to go, with no real rites of passage except for what’s shown on TV. Food becomes a drug, a way to self-soothe, a way to deal with not knowing how to act, or who to be, in a degenerate world.

Finally, there’s death as a fashion statement, with not only corpse-like models, but also models posing in ways to appear like corpses. There’s a romanticization of death, with vampire movies and dystopian visions with a cultural message of ‘no future.’
The other way this spells death is when girls lose their curves and their cycles, and with it, their ability to continue life by giving birth. This fits with the depopulation agenda, and with the establishment’s all-in strategy to implement white genocide.

Coming Back to Life 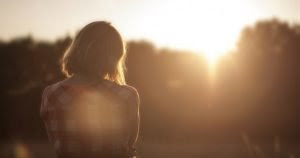 We can see how an eating disorder or obsessive entrapment keeps someone in the state of envy (related with the lower chakras to the knees) and brings many literally to their knees. As a teenager, I was told by a school counselor that I would never recover from my eating disorder, but I did it slowly by finding healthy pathways in this sick and dying culture.
Getting back to the flower analogy, we need soul nourishment, which is often the main hunger, instead of the empty calories of trash culture. And stepping out of the vampire’s lair and into the sun again.
These are some of my impressions of a complex and enigmatic spectrum of disorders, and I’m interested to hear your thoughts.
Sources:
How Eating Disorders Became a White Women Problem, by (((Allison Yarrow))), Huffington Post
Eating Disorder Statistics – US
Kim Chernin, The Hungry Self
Michelle Sparks, Illuminating Anorexia
Anita Johnston, Eating in the Light of the Moon
eating disorders thoughts white genocide