Renegade Editor’s Note: This is a contentious theory, with some people even asserting that the Aryans are the true Neanderthals, and that Neanderthals have been given a bad reputation because of this. It does seem entirely likely that jews do descend from a different species or at least subspecies than the rest of us.
We in the Jew-wise truth movement tend to recognize Jews by certain defining physical and mental traits: hooked noses, beady eyes, gravely voices, socio pathology, paranoia, the hoarding of resources, and a hatred for non-Jews. But what if these traits were the result, not the cause, of their fundamental difference from us?
It’s said that the truth is often stranger than fiction. Believe it or not, modern Ashkenazi Jews and several other groups – the ‘Asiatic hordes’ of Turk-Mongols which followed the Russian WW2 shock troops to butcher and rape Europeans, as well as many Georgians, of which Stalin was an example – are all descendants of Neanderthals. I believe the Khazars were as well. Which, of course, makes the whole ‘Khazar Theory’ a moot point. Whether they converted or not, they were still of Semitic/Neanderthal stock.
Regarding the Ashkenazim, they are the true Caucasians – the descendants of Neanderthals who survived the ice age in the Caucasus Mountains, then later spread into eastern Europe. The Ashkenazim turned pale from living through the ice age, bundled in furs – reinforced later as they mixed with Europeans. The other major Neanderthal lineage was Asiatic, originally concentrated in modern day Mongolia. I believe the Neanderthals were primarily blood type B. Blood type researcher Dr. Peter D’Adamo states that blood type B originated with nomadic, shepherding peoples. The people of ancient Mongolia and the Middle East are prime examples of nomadic shepherds. Eastern Europe has a much higher than average amount of blood type B to this day. 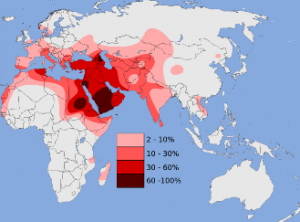 The Jewish/Neanderthal group is best defined, however, by the mitochondrial DNA haplotype group J. Scientists don’t dare call this a Neanderthal DNA type, but it is. The following image shows its distribution which supports this information perfectly.
I believe the Ashkenazim are a separate Neanderthal lineage primarily because of their higher average IQ. The source of this higher IQ is a common ancestry with another lineage possessing extremely large skulls. These skulls have been found in modern times in Peru – they are called ‘Paracus Skulls’. There are two types of elongated skulls: one non-human, with 25% greater brain capacity, and the natives who practiced skull flattening in an attempt to emulate them. According to Brien Foerster, the world’s leading researcher on elongated skulls, recent DNA testing shows that the non-human type originally came from the Caucasus Mountains – the same place the Ashkenazim originated from. The elongated skull lineage was undoubtedly the priestly class. This trend persisted for some time as all ancient headdresses, including that of the pope today, are elongated and could easily have hidden such heads.
In any case though, Jews all are share common ancestry which is far different than Whites. The very term ‘Caucasian’ is a misnomer intended to confuse. Whites are descended from Celtic or Aryan stock. Aryan – the blond-haired stock which according to mythology descended from the ‘gods’ – original blood type O neg; And Celtic – the red-haired stock, which archaeological evidence proves are descended from giants – original blood type A neg. The ancient Egyptians were an example of this lineage. After being multi-culturalized by the Hyksos (Hebrews), they left Egypt and settled in Ireland. This is why the Jews hate the Irish so much – they are descendants of the ancient Egyptians.
The fact that these ethnic groups are Neanderthal technically makes them non-human. Being pathologically evil as they are, they love to reverse meanings. According to the Talmud, only Jews are human; non-Jews are lower than animals. What’s more, Orthodox Judaism teaches that this difference extends to the very soul. Chabad Rabbi Yitzchak Ginsburgh stated “Gentile souls are of a completely different and inferior order. They are totally evil, with no redeeming qualities whatsoever…”. Chabad Rabbi Mendel Schneerson further stated “A non-Jewish soul comes from three satanic spheres, while the Jewish soul stems from holiness”. This explains the Jews’ complete lack of empathy toward mankind. History shows that Jews have been the cause of at least 90% of the suffering on this planet throughout recorded history. We are literally witnessing an inter-species war of survival between Neanderthal and Homo Sapiens.
This information also explains many apparent contradictions in history. One example is the discrepancy in the U.S. Constitution: It states “All men are endowed by their Creator with certain Inalienable rights”; yet at the time of its writing, only white property owners were included in its benefits, while all minorities were excluded. Why? Because ‘men’ refers only to Jews. ‘White property owners’, as a group, were the elite of their day – then, just as today, society’s elite consisted almost entirely of Jews and their Gentile puppets. Over the next few decades, the more average white citizen began to share in the Constitution’s provisions. But once the Jews had firmly established their power base, average whites were excluded from sovereignty and true freedom through the passage of the 14th amendment. And once again only the elites benefited, which is where we are today.
Other articles and posts on this subject, with pictures and supporting information:
-https://en.wikipedia.org/wiki/Haplogroup_J_(mtDNA)
-https://www.johndenugent.com/neanderthals-and-semites/
-https://cintayati.wordpress.com/2014/06/09/they-are-not-like-us/
-https://lookism.net/Thread-Jews-are-inbred-Neanderthals
-https://forum.davidicke.com/showthread.php?t=198293&page=3
For further reading on the racial aspects of this article, I would recommend:
-Chosen People from the Caucasus by Michael Bradley
-The Children of Ra by Arthur Kemp
-Brien Foerster’s 7-part video series ‘DNA Results Of The Paracas Elongated Skulls Of Peru’, available on Youtube
jews modern day neanderthals