The United States Was Always A Police State......

- January 18, 2021
https://www.youtube.com/watch?v=hqvOcr0uu9o&list=WL&index=2 https://www.youtube.com/watch?v=FoP9ufM3bjw&list=WL&index=4&t=66s As the nation remains in the grip of a self created hysteria a mere 2 days before the inauguration of Joe Biden as the 46 th president of the United States, I hate to be the bearer of more bad news. It is sad that it took the loss of human life on January 6 th , 2021 from the Capitol Hill riots for most Americans to see what I have been saying about their country for the past 12 years. The nation is nothing more than a police state that works in tandem with Elitist Jews and “White” Freemasons to silence and prevent the truth from reaching the rest of the world about how terrible life here is for the vast majority of the American people. Social media in the United States, or what people call “cancel culture”, is nothing but a ploy to control the masses. If one is even halfway intelligent and can discern that whenever you make politica
Post a Comment
Read more

Hitler Made Us Holy Again

https://dailyarchives.org/index.php/archives/2774-hitler-made-us-holy-again In his Table Talk, Adolf Hitler accepts as a matter of course that the figure commonly known as Jesus Christ was an actual historical person. He describes him as the leader of a popular revolt against the Jews of his time. by Martin Kerr Savitri Devi, one of the best known and most eloquent of Hitler’s post–war disciples, felt otherwise. In her essay, Saul of Tarsus, she writes that based on her own extensive research, she believed that Jesus (whose name would have been Yeshua bin–Yusef al–Nazarini or something similar in his native Semitic tongue of Aramaic) was merely a fictional character from Christian mythology; that is, he was not an historical person. It matters little to us today whether or not Yeshua was real, or whether he was as imaginary as Bilbo Baggins and Huckleberry Finn. But, of course, it does matter to the Christians, who have built up an elaborate if perverse theology based on his putative
Post a Comment
Read more

- January 18, 2021
http://www.renegadetribune.com/53-jewish-groups-lobby-biden-to-adopt-israel-centric-definition-of-antisemitism/   Renegade Editor’s Note : The Progressive Israel Network is obviously a controlled opposition organization, which only disagrees with the Conference of Presidents of Major Jewish Organizations on how best to support Israel and fight “anti-semitism.” By Alison Weir Jewish Insider  reports today: “ Jewish groups lobby Biden on IHRA’s working definition of antisemitism .” The IHRA definition is a non-traditional definition promoted by Israel partisans in which many negative factual statements about Israel are considered “antisemitic.” The definition is based on a formulation proposed by an Israeli official in  2004  that has been promoted world wide. The  letter , sent to President-elect Joe Biden by the Conference of Presidents of Major Jewish Organizations on January 12th, calls on “all federal departments and agencies” to use the definition. The letter is signed by Conferenc
Post a Comment
Read more

- January 18, 2021
http://www.renegadetribune.com/nazi-botched-gassings-and-the-self-assisted-holocaust-hoax/   By  Friedrich Paul Berg ‘Nazi’ Botched Gassings? A new book,  Gruesome Spectacles  by Austin Sarat, is gaining some attention, partly because of the recent botched execution by lethal injection in Oklahoma. Were there ever any “botched” mass gassings of jews in “Nazi” Germany? If not, why not? Given the complexity and record of botched gassings in the US where at most two people were gassed at one time and where great care is taken to do everything properly (even “painlessly”), there should have been many more botched gassings in NS Germany. But, there is at best only the sketchiest mention of anything like that. The Gerstein diesel gassing tale would be one such story—but the botching was not due to any problems with the gas not killing the intended victims within the expected execution period but only to the problem of getting the diesel engine to start. Was cyanide really any better? From th
Post a Comment
Read more

'I don't know what treason is’: Trump rioter (white idiot) arrested after incriminating herself on Instagram

- January 18, 2021
https://www.rawstory.com/gracyn-dawn-courtright/?utm_source=&utm_medium=email&utm_campaign=6381 University of Kentucky student from West Virginia who was caught in video inside the Capitol on Jan. 6 is now facing multiple charges, WCHS reports. Gracyn Dawn Courtright is charged with knowingly entering or remaining in any restricted building or grounds without lawful authority; knowingly engaging in disorderly or disruptive conduct in any restricted buildings or grounds; violent entry and disorderly conduct on Capitol grounds and theft of government property (under $1,000). According to the complaint filed against her, Courtright had posted multiple videos to social media showing her inside the Capitol, some of which have since been deleted. One photo posted to Instagram shows her the Capitol with the caption, "can't wait to tell my grandkids I was here." Other photos from security footage show Courtright inside the Capitol carrying a "Members Only" sign
Post a Comment
Read more

Hitler as Enlightenment Intellectual: The Enduring Allure of Hitlerism

https://dailyarchives.org/index.php/archives/2796-hitler-as-enlightenment-intellectual-the-enduring-allure-of-hitlerism Hitler as Philosophe: Remnants of the Enlightenment in National Socialism, by Lawrence Birken. Westport, Conn.: Praeger, 1995. Hardcover. 120 pages. Reviewed by Mark Weber. A specter is haunting the world -- the specter of Hitlerism. That, in short, is the stern warning of this provocative book, written by an Assistant Professor of History at Ball State University (Indiana), and published by Praeger, a leading US academic publisher. In spite of decades of vehement vilification, says author Lawrence Birken, Hitler's views have enduring and dangerous appeal -- not because they are bizarre and alien, but precisely because they are rational and well grounded in Western thought. In particular, Birken stresses, Hitlerism is firmly rooted in the rationalist and scientific outlook of the 18th-century European Enlightenment. This is not meant as a compliment, however; th
Post a Comment
Read more 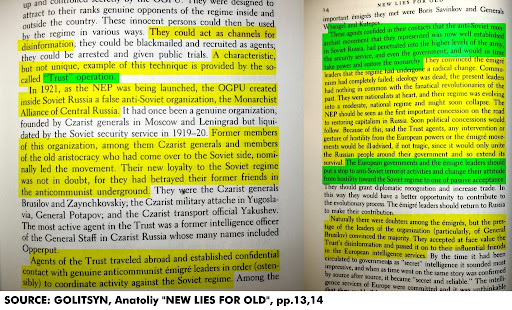 http://www.renegadetribune.com/q-anon-bears-striking-resemblance-to-bolshevik-psy-op-from-1920s-known-as-operation-trust/?doing_wp_cron=1610960408.2064490318298339843750   By  Chris Menahan “Operation Trust” was a Bolshevik counterintelligence operation run from 1921 to 1926 aimed at neutralizing opposition by creating the false impression that a powerful group of military leaders had organized to stop the communists’ takeover. Here’s an except on the “Trust” operation from pages 13-14 of Soviet defector Anatoliy Golitsyn’s book,  “New Lies for Old” : The similarities with  the Q-Anon “Trust The Plan™” psy-op  are remarkable. From Wikipedia’s article on Operation Trust: Operation Trust was a counterintelligence operation of the State Political Directorate (GPU) of the Soviet Union. The operation, which was set up by GPU’s predecessor Cheka, ran from 1921 to 1926, set up a fake anti-Bolshevik resistance organization, “Monarchist Union of Central Russia”, MUCR, in order to help the OGPU
Post a Comment
Read more
More posts