Homosexuality seems to be a kind of last stand of implicit White identity.” – Richard Spencer

Why is the White nationalist movement filled with so much flaming faggotry?
I was recently having a look at the Daily Stormer to see what kind of agenda they are pushing now, and one of the biggest ones is still the absolutely vile hatred of women, which has been getting even more extreme.
Anglin recently posted a note from a reader to convince his young fans that love for a woman does not actually exist. The supposed reader writes:

I will be the first to say, I love God, I love my family, I love my race, and I love my dogs… But it took me a very long time to realize finally that any relationship with a woman is nothing more than a financial transaction… And when naive young men like I was back then voluntarily allow themselves to be manipulated by women solely due to thinking they were “in love”, it is the very definition of abuse of a minor in the same sense that some women claim to be emotionally abused by their non-cucked boyfriend or husband, and how that allegedly prevents the woman from simply leaving.

The midget responds by expressing his desire to indoctrinate young teenage boys into hating women as well.

My hope is that many of you readers are 14, and will find these informations, and never in your life fall into the idiotic Jew trap of “true love.” A woman will NEVER love you, because a woman is not a human and it is incapable of feeling any emotion other than pity for itself.

He goes on to express his digust with the fairer sex:

Women are satanic, sadistic monsters who take pleasure in destroying men. Even if you have been with a woman for 20 years, you always need to keep this fact in the front of your mind: if she gets a chance, she will destroy you. Never trust a cunt as far as you can punt her.

Does that not sound like a psychopathic sodomite waging psychological warfare to you?
The reader was responding to an article Anglin had written about the insane Hollywood relationship of Johnny Depp and Amanda Heard, making it seem like we can draw some profound conclusions by learning about the psychopaths in Hollywood.

When you see the mask slip from your own girlfriend or a friend’s girlfriend or your mother, it is always the same: this ability to act with absolute hatred and zero empathy towards a person they supposedly “loved.” The vitriol is so extreme, that it proves beyond any doubt that women do not have souls, they are simply demonic creatures inhabiting flesh.”

Honestly the vitriol I have experienced from women in my life is nothing at all compared to the vitriol I see spewed by the mind-controlled manosphere idiots on a daily basis. They are even more extreme than the craziest pink-haired feminist ever could be.

All of you kids need to understand that this is not unique; this is how every single relationship in the modern world ends. This is the way that women behave. They are monstrous creatures from hell.”

Again, Anglin is making it clear that he is speaking to his target audience of KIDS, trying to indoctrinate them into his malicious mannerbund, telling them that they should never love a woman.

We have to deal with women. We don’t have any choice. Be we all need to understand that when we are dealing with them, we are not dealing with what our biology tells us they are. We are not dealing with precious beings that should be loved and cherished. They are monstrous demons from hell who will rip the flesh from your bones as soon as they get the chance. And you must behave with them accordingly.”

This was just a couple recently articles, which are really just a drop in the bucket, considering over the years Anglin has repeatedly called for forced impregnation of child brides, White sharia rape gangs, putting women in cages, and much more. I do not care one bit that his cronies just say he is being “satirical.” There is nothing whatsoever humorous about what he is doing.
Truth be told, there is also nothing unique about what he is doing either. The “White Nationalist” movement has been swarming with predatory homosexuals seeking to sway young White men away from women and into their masculine embrace.
For example, there’s sodomite Jack Donovan, who was a frequent speaker at events hosted by both Richard Spencer and Greg Johnson, the latter of whom does not even try to hide the fact that he is a homosexual. Jack has written books about his love of “masculinity.” 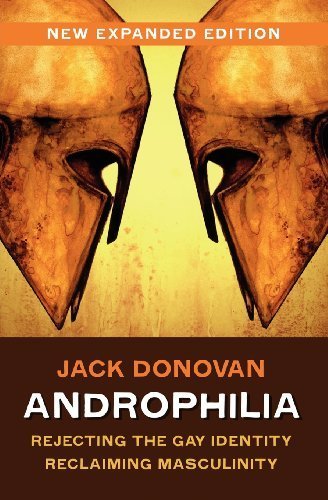 Jack has responded to criticism of his sodomy:

Yeah, I’ve been a top for years. I basically fuck men like they are women — but I’m glad that they’re not. I’m banging this jacked rich liberal right now. Probably the best piece of ass I’ve ever had. I’ve had sex with women, but I’ve been with one guy for 14 years, so there is no question of…switching teams…in any meaningful way. He’s a good guy who supports me and my work and always has. I have a dude on the side, but it’s all on the level, and betraying Lucio — who became blood-brothers with me for my second book, and has my initials tattooed (by me) on his arm — because I decided to “explore other ideas for philosophical reasons” would be the homo version of “Eat, Pray Love.”
As far at The Way of Men is concerned: It’s either right or it isn’t. A lot of the ideas came from conversations with my straight friends about their frustrations with their lives. It’s not about me “converting” people. Let’s be real. I’m a jacked tattooed guy who is more or less a skinhead. Do you for a moment think I can’t get laid? The reality is I can post a pic to a hookup app and have someone blowing me inside of 3 hours. I’ll be able to pull prime ass from dudes with daddy issues for the next 10 years.

Another speaker at many “White Nationalist” gatherings is Millennial Woes, who has talked about his attraction to “pretty boys” and all of the males with whom he has had sex.
Bitchute link
And of course who can forget about Milo, who spoke about the important role an older man can play (sexually) in the life of a young teenage homosexual boy.
Milo also made out with “Proud Boy” Gavin McInnes at a big media event. Gavin stuffed a black dildo up his anus live on his own show.
Milo somewhat recently interviewed a young star named Nick Fuentes, who repeatedly speaks about how much he does not like women. What he does like, however, is spending over 10 hours on a live stream on a date with his “cat boy” friend, who he claims is not gay.

The above image was photoshopped. Nick did not actually put that very real picture of “cat boy” on his stupid easel, but that cat boy definitely did suck on a big black dildo.
There was also the phenomenon of the “Alt Right pool parties,” where TRS members and fans would meet up, and where one of their hosts, Ghoul, would prey upon an underage boy.
When American Identity Movement leader Patrick Casey was a part of Red Ice, he made a video praising a character named “Bronze Age Pervert” who constantly posts images of hairless muscular young men who are semi-nude. It’s disgusting.
There’s so much more to this whole story, and I am sure there are many figures who I have missed, but I am feeling a bit sick to my stomach and think you should get the point by now.
These “masculine” men, even ones who are not openly homosexuals, are putting out this material to groom impressionable youths into the sick society of sodomites. Anyone pushing young White men to hate their own women is an enemy and should be treated as such. They are doing the work of the jews, whether they know it or not.

Blessed are you, Lord our God, Ruler of the Universe, who has not made me a woman.” — Morning Blessings, Artscroll Siddur, p. 12.